Transformers: Legends "Til All Are One" 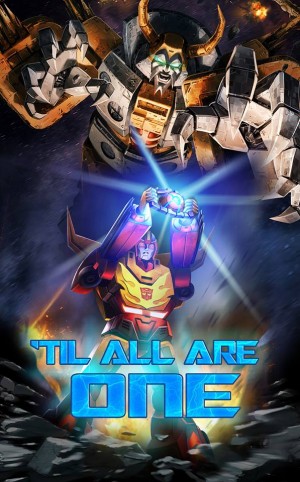 DeNA has announced the next chapter in their Transformers: Legends mobile device game, "Till All Are One". Check out the episode details and promo art below. You can download the app by clicking here.

Unicron, a massive planet-eater, is threatening to destroy Cybertron and all its inhabitants. Can the Autobots stop the destruction of their world?

Is he turning into the giant Rodimus Prime from "Nightmare Planet" so he can go toe-to-toe with Unicron instead the traditional matrixing?
Re: Transformers: Legends "Til All Are One" (1544377)
Posted by bortimacy01 on January 23rd, 2014 @ 12:57pm CST
those were great collections, jeez. can't help it. so envy to have those things. do you have other screenshots with your collection guys? wanna see bumblebee either in a robot or car transformation.


_________
videos
Re: Transformers: Legends "Til All Are One" (1546305)
Posted by El Duque on January 29th, 2014 @ 7:33pm CST
Our friends at DeNA dropped by announce the latest event in their Transformers: Legends mobile device game, "Revelation". If you haven't done so already the app can be downloaded by clicking here. Check out the promo art below featuring popular characters Sideswipe and Bludgeon!

Thunderwing and the Decepticons have plans to overtake a Sun-Farming facility, but a spy has thrown a wrench in the works by alerting the Autobots.

Join the new episode to see who will come out on top when these two forces clash: http://moba.ge/TRANSFORMERSLegends

Wasn't ROTF Bludgeon originally conceived for the Unicron trilogy, then moved for 2009's universe for a G1 Bludgeon?

Artist Don Figueroa submitted a concept for a Unicron Trilogy Bludgeon toy way back during the development of the Energon or Cybertron toylines. Obviously, the concept wasn't put into production as a toy at the time, so Figueroa used it as inspiration for his IDW Publishing Stormbringer rendition of Generation 1 Bludgeon. However, Hasbro evidently resurrected the concept for the Universe (as mentioned by Hasbro at BotCon 2009) and then the Revenge of the Fallen lines, where it was finally released as that universe's Bludgeon. Figueroa notes that his contribution on this toy is very small, as his work on it ended when he submitted the concept to Hasbro way back when.

They ordinarily take the Classics/Generations designs for this stuff, with the occasional movie design. I don't recall the last time they used an MP.
Re: Transformers: Legends "Til All Are One" (1546472)
Posted by Sabrblade on January 30th, 2014 @ 10:52am CST

They ordinarily take the Classics/Generations designs for this stuff, with the occasional movie design. I don't recall the last time they used an MP.

Are we certain that it's specifically the MP design and not just a design based on G1 Sideswipe in general?

They ordinarily take the Classics/Generations designs for this stuff, with the occasional movie design. I don't recall the last time they used an MP.

Are we certain that it's specifically the MP design and not just a design based on G1 Sideswipe in general?

Optimus's Legends designs look like they could be either MP Convoy or a general G1 Optimus design.

Being that all of the panel lines, hinges, etc. that are exclusive to the MP figure are present in this image, yes, I am sure it's specifically the MP design and not a generic G1-based design.

Give it another look.
Re: Transformers: Legends "Til All Are One" (1546483)
Posted by Sabrblade on January 30th, 2014 @ 11:13am CST
The chest hood looks more like the scrunched-up flat G1 cartoon design chest hood rather than the spread out flat MP chest hood to me.

It could just be a general design that draws inspiration from the MP as well as from the basic G1 Sideswipe look ordinarily.
Re: Transformers: Legends "Til All Are One" (1546489)
Posted by megatronus on January 30th, 2014 @ 11:26am CST

Sabrblade wrote:The chest hood looks more like the scrunched-up flat G1 cartoon design chest hood rather than the spread out flat MP chest hood to me.

It could just be a general design that draws inspiration from the MP as well as from the basic G1 Sideswipe look ordinarily.

Bludgeon's face and forearms are not 100% accurate to the ROTF toy, but it is unmistakably ROTF Bludgeon. Whether you want to say it's "inspired by" ROTF Bludgeon is up to you, but it is ROTF Bludgeon. So too with Sideswipe here - you can say it's "inspired by" MP Sideswipe, but it is unmistakably the MP design, slightly shrunken chest or not.
Re: Transformers: Legends "Til All Are One" (1548092)
Posted by Va'al on February 5th, 2014 @ 10:16am CST
We just received some very interesting news from our friends over at IDW Publishing, who are teaming up with Hasbro and DeNA to bring the ultimate Transformers fan experience in the latest Transformers: Legends episode! Check out below for details on how to access a free IDW comic, a 15% sale at HasbroToyShop and the new game episode - Dark Cybertron.

San Diego, CA (February 5, 2014) – Hasbro, DeNA and IDW Publishing today announced a collaboration to bring Dark Cybertron to life in a new interactive experience for the action-packed mobile card battle game TRANSFORMERS: LEGENDS. Fans that play the TRANSFORMERS: LEGENDS in-game episode that starts on February 5 and runs through February 11 will gain free access to a special edition Dark Cybertron comic from IDW Publishing, in addition to exclusive discounts on select TRANSFORMERS action figures from Hasbro featured in the Dark Cybertron story, such as ARMADA STARSCREAM and SKYWARP.

Dark Cybertron is the first Team Battle episode in TRANSFORMERS: LEGENDS. It combines elements of cooperative and competitive gameplay that players have never experienced before this mobile game. In the Dark Cybertron episode players will join forces with the AUTOBOTS and DECEPTICONS to battle against a powerful and ancient enemy, the NECROTITAN, and fight to unravel the meaning behind mysterious new developments in the battle for CYBERTRON.

The new Dark Cybertron episode is available to play beginning on February 5 by downloading TRANSFORMERS: LEGENDS for iPhone, iPad, iPod touch or Android devices for free at: http://mobage.com/games/TRANSFORMERS-LEGENDS

As part of the collaboration between DeNA and IDW Publishing, players who take part in this week’s TRANSFORMERS: LEGENDS Dark Cybertron episode can also download a special issue of the Dark Cybertron comic book for free via the game. The limited release comic chronicles the latest developments in the battle between the Autobots and Decepticons from the fan-favorite series.

Save on Action Figures

About DeNA
DeNA (pronounced "D-N-A") is a global leader of developing and operating mobile services including free-to-play games, the Mobage social games platform, e-commerce and other online offerings. Founded in 1999, DeNA is headquartered in Tokyo with offices and game development studios across the globe. DeNA Co., Ltd. is listed on the Tokyo Stock Exchange (2432). For more information, visit: http://www.dena.com

About Hasbro, Inc.
Hasbro, Inc. (NASDAQ: HAS) is a branded play company dedicated to fulfilling the fundamental need for play for children and families through the creative expression of the Company’s world class brand portfolio, including TRANSFORMERS, MONOPOLY, PLAY-DOH, MY LITTLE PONY, MAGIC: THE GATHERING, NERF and LITTLEST PET SHOP. From toys and games, to television programming, motion pictures, digital gaming and a comprehensive licensing program, Hasbro strives to delight its global customers with innovative play and entertainment experiences, in a variety of forms and formats, anytime and anywhere. The Company's Hasbro Studios develops and produces television programming for more than 180 markets around the world, and for the U.S. on Hub Network, part of a multi-platform joint venture between Hasbro and Discovery Communications (NASDAQ: DISCA, DISCB, DISCK). Through the company's deep commitment to corporate social responsibility, including philanthropy, Hasbro is helping to build a safe and sustainable world for future generations and to positively impact the lives of millions of children and families every year. It has been recognized for its efforts by being named one of the "World's Most Ethical Companies" and is ranked as one of Corporate Responsibility Magazine's "100 Best Corporate Citizens." Learn more at http://www.hasbro.com.

Re: Transformers: Legends "Til All Are One" (1548138)
Posted by wolverinetodd on February 5th, 2014 @ 12:37pm CST
Yep, just placed my order for the four as well. Saved $2.25 ($9.00 total) on each and qualified for free shipping. The retail stores in my area haven't started getting in anything yet so this is the best route to get the figures and at a discount at that. Thanks so much for the discount code.

I managed to snag Goldfire, Hoist, and Dreadwing through http://www.hasbrotoyshop.com a couple of weeks ago, but for some reason they failed to list Skids at the same time. And of course, now it's out of stock. So now I'm waiting for Skids to be restocked and hopefully that'll happen about the same time Whirl is added to the "Order Now" category. Or maybe even when Rattrap, Crosscut, Tankor, Arcee, and Chromia are added would be excellent as well. Free shipping is free shipping.

I also recommend ordering the simplified transformation version of Voyager Class Predaking. This dude is huge and lists for the same price as the other Voyagers that are smaller than it is, including its original version of itself. And the wings are better than the original when it comes to posing them behind Predaking in robot mode.
Re: Transformers: Legends "Til All Are One" (1548145)
Posted by Va'al on February 5th, 2014 @ 1:04pm CST

Mindmaster wrote:Oh man, I need that Armada Starscream artwork by itself very badly...

That would be Guido Guidi.