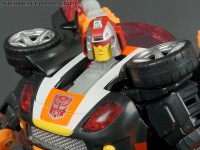 As the fever from BotCon 2012 begins to break, we take one last look after our massive coverage on the last show. We collect our missing crew, Tigertracks and Jon 3.0, who round out host Counterpunch, Seibertron and Razorclaw. The episode is available directly, from our RSS feed, and from iTunes.

Bot Shots are awesome. Love those things, but like Ryan said, there isn't much you can discuss about them.
Re: Twincast / Podcast Episode #46 "Winding Down" (1382009)
Posted by Savage on May 21st, 2012 @ 2:54pm CDT
Great episode, guys. Lots of interesting discussion post Botcon, and nice to hear everyone's input on the latest TF Prime toys and shows.

Yes, let's kill Bumblebee.
Re: Twincast / Podcast Episode #46 "Winding Down" (1382164)
Posted by worldsgreatest on May 21st, 2012 @ 11:21pm CDT
In case no one has answered you guys yet, retailers set their own order numbers for Free Comic Book Day. There is no allocation of product; print runs are set the same way all other regular retail print runs are set.

On the subject of the TFCC subscription service, I'm looking forward to it but I paid just over $70 to have SG Drift and Over run shipped to me this year (I have an international membership). There are three figures that I'm interested in next year.

If it turns out that one toy is released every couple of months and gets shipped by itself, then I'm as good as out of the club. Which will be unfortunate. The shipping will just be too expensive.

I cant be the only one in this boat can I?

Again, good work on the podcast.
Re: Twincast / Podcast Episode #46 "Winding Down" (1382241)
Posted by Flux Convoy on May 22nd, 2012 @ 6:56am CDT
I'm not selling on Hercules just yet. I may even be changing my mind. I'm uncertain at this point. I do collect Devastators after all. He simply does not feel as satisfying to me as he should. So I'm simply debating it with myself at this point.

As always, I enjoyed the podcast. Laughed pretty hard at Counterpunch's "Impossible." in response to Jon about the Prime Wii game. So far the game seems to only be confirmed for the Nintendo systems. The trailer makes it look fairly bad. My two cents. Fall of Cybertron though, bring it on. War was good fun. I really hope they've taken a hard look at all the online issues it had. I liked that part very much but the connection issues were laughable for any modern game. It says "Transformers" on it.

Gundam Fansites have an umbrella on third party talk simply because BanDai has killed off any sort of Gunpla that isn't their own - they have sued KO companies and the like before they can even flourish.

Good luck with your custom CP, hopefully it leads you onto the road of bigger things!

My favorite part of Seibertron.com is the edit button on everyone's posts ^_^

If I could kill off a character I'd kill off Unicron, as I'd then have the power of a God, be master of the Universe and have a fembot harem

Seib, glad you are into the Millions books
they have been a great resource for myself
grabbed the chinese G1 print off you initially and have collected back to the Binaltech book so far
as well as the Brave series/ Eldran book
Re: Twincast / Podcast Episode #46 "Winding Down" (1383446)
Posted by Sodan-1 on May 24th, 2012 @ 5:19pm CDT
A very good episode considering it was basically tying up loose ends from BotCon.

I'm glad you touched on the whole 3rd party downplay on Seibertron. I had thought some of Seibertron's comments in the dedicated thread were getting very defensive and a little stand-off-ish. (Can't say I blame him given some of the responses.) But it was a relief to hear Seibertron's opinion on the matter with his own words. It reassured me that it was a rational decision born from a strong but fair personal opinion. Still a little gutted mind you.

The talk of The Avengers amused me. I myself have seen it three times, yet because of the impatience of my mates I was unaware of a second credits scene. Looks like I need a fourth viewing.

I can join the club of having friends that used to own Transformers that never existed. My ex and her brother said that there was a G1 Arcee toy!!! I couldn't argue with them as I was stunned into silence that two people shared the same illusion.
Re: Twincast / Podcast Episode #46 "Winding Down" (1384760)
Posted by Hollywood Hoist on May 28th, 2012 @ 10:09pm CDT
I just listened to the first half of the podcast, and great as always. Though during the film fest discussion some issues were brought up that I feel I should address.

My son was 2 1/2 at the time I shot the video, he knows a crazy amount of Transformers names, not because I shove it down his throat, but he wants to know the names of everything (cars characters, Transformers, Dinosaurs, disney characters) He even asks me the names of his non-licensed plush animals. He actually has now learned to name his own animals (one named after our cat who died a few days after I returned from Botcon), anyway that is why he knows so many TF names. He also knows more than 30 dinosaur names with correct pronunciation. As for him knowing the TF theme song, it started out as something I sang to him to calm him down after he got hurt, and then it became one of the many songs I sing to him at night... every night. My son has an amazing memory and attention span and helps him to remember all this stuff. The only TF show he watches regularly is Rescue Bots, which we watch as a family. We did watch some episodes of Prime and G1 but quickly decided it was too violent.

My son chooses what he's into, I don't, know matter what he's into I'll be there by his side playing with him and enjoying the things he enjoys.