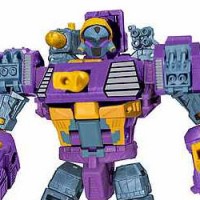 Seibertron.com is proud to present the latest episode of the Twincast, blasting at you with all dirt on the BotCon 2013 news and much more! Join host Counterpunch, along with Jon 3.0, and Razorclaw, Seibertron and Tigertracks for a round table discussion on the set preview and details of the upcoming convention!

As always, the episode is available directly and in our RSS Feed and should appear on iTunes in 24 to 48 hours.

The price of BotCon - how much is too much? Thanks to the meticulous data maintained by collector G.B. Blackrock, we discuss the rising costs of the set and add-ons:

Discussion Topic - With the rising cost of collecting, the Twincast team shares some of their best tips to save money and maximize your purchase power!

Seibertron.com is your Ultimate Transformers Resource!

As for the BotCon stuff, I had planned to hit up BotCon this time around, maybe go see everyone at the bar to celebrate my tenth year as a site member, but money issues from my recent move, compounded with how unimpressed I've been with this set, and how much it's all costing these days... I just can't do it.

Edit: This is for Jon

What Ryan said as a good marketing technique in regards to having a homerun in the box set and having mediocre fill ins, I think that was truly finalized or atleast cemented with the 2010 Cindersaur/Slicer 2-pack that just did not sell well at the convention, and they had to sell the remaining at the club store. If FP went back in time to 2010 and wanted to redo the way the sets were set up, I'm sure Csaur and Slicer woulda been plugged into the box set, while some other figures would have been the attendees as they'd sell better.

In my opinion, I think that every figure in the set should be a home run. For me, this year doesn't feel like it. I honestly think that if Obsidian and Strika were one of the '13 attendee 2-packs, that would have been the most sought out set 2-pack and bought out instantly.. but for the first time in awhile, it just feels like that this box set is going to be split up.

Razorclaw - You got my thoughts on Botcon set pretty much spot on. Good summary!

Seibertron - If you need those Prime RC Cars, I picked them up at a Marshall's a couple weeks ago. Not amazingly cheap at $12 each but not as bad as regular retail. I have a spare Knockout if you really run out of luck, lmk.

Green packaging - I've noticed the plastic used for the outside bubbles is totally recyclable now. Has the little arrows on it, never did before, so on a Voyager box I can now put it in my city recycling whereas I couldn't before. Inside insert bubbles still seem to be garbage.

Fender Bender wrote:Movie 1 Wreckage would have been a better option as Strika, would the mold been available.

In all honesty, I think that if the 2007-2008 Movie 1 molds didn't have any licensing issues, the Club might have gladly used them in a heartbeat. We only have Paramount to blame for this.
Re: Twincast / Podcast Episode #63 "Beast Machine Wars" (1470245)
Posted by joevill on March 8th, 2013 @ 7:50am CST
Welcome back Matt! We missed you! It was great to hear all the original staff again. Brilliant name for the podcast Bob btw!

It is very interesting to learn that what it cost for the primus and add-ons back in 2005 is now what it costs for a primus this year. *sigh*

I laughed really hard when Bob said, "everybody knows I spend a lot of money."

You guys are onto something about buying unpopular G1 toys. ScottyP, your an evil one!

Stupidly left my card details on the page when I ordered subscription figures, and the club automatically charged membership to my card this year.
Re: Twincast / Podcast Episode #63 "Beast Machine Wars" (1470946)
Posted by chuckdawg1999 on March 11th, 2013 @ 2:20am CDT
On the topic of saving money, I really feel there's three main things for people to do:

1) Join a pay-to-shop site- These are the sites that "pay you to shop" it's pennies on the dollar but it's pennies you never had before. The big one that you see on TV is Ebates but Big Crumbs sometimes has a better rate on other sites.

2) Get the pay pal debit card- Debit cards insure you don't spend more than you can afford and everybody practically uses pay pal nowadays. It's still pennies on the dollar but it gets deposited back into your pay pal account.

3) Do online surveys- Most surveys are no longer than an hour and those pay big $$$ most sties pay you in points that can be converted to pay pal cash or Amazon gift cards (you do use Prime right?)

This isn't going to make you rich and you certainly won't be able to drop big money in one shot but once you get rolling you'll be able to buy a TF (or other figure) a week.