What's on JOE Mind Episode 54: The BotCon vs GIJoeCon Experience 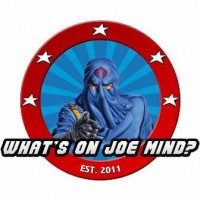 Ever wonder how G.I.Joe fans feel about FubPublications and the Transformers fandom? Our fearless Twincast host Counterpunch ventures into Joe territory to hang out with chuckdawg1999 and the rest of the What's On JOE Mind crew to discuss just that, and compare the convention experience between BotCon and GIJoeCon. They probably talk about a lot of G.I.Joe stuff too! Click here to listen.

This week we step back into the shadowy depths of the fandom to find the person responsible for the very cool, but very outlawed fan made video game, GI Joe: The Attack on Cobra Island. A crack team of WOJM investigative reporters, seasoned by watching 20/20 tracked down the lead designer of the game, known to us as Lord Skiff (aka Range Viper). Skiff, or Skiffer as Mike likes to call him, agreed to a clandestine interview. TO protect his privacy, Skiff asked that we disguise his voice. He's an every day collector and fan just like you and me. Find out what he has to say about his game, the C&D issued by Hasbro's lawyers and its foggy future. Rounding out the first half of the program, our buddy and admin of JoeBattlelines.com, Fred Meyer (aka Leo T. Dragon) gives an indepth review and historical lession of the 2002 JoeCon Crimson Strike Team set. Following halftime we were joined by Michael (aka Counterpunch) co-host of the Seibertron.com Twincast Podcast to discuss the atmosphere at BotCon and some of the differences and similarities of the opposing fandoms. You'd be surprised at what we discover. After our good byes with Counterpunch, we dip into the mailbag for some JoeCon related questions. In the news, Chuck GUSHES about the new YoJoe.com layout. The rest of us admit, it is AWESOME! THe GIJCC unveils Stormavik and the first figure of the opposing faction - you get our reactions. All this and a ton more, PLUS we debut our new ORIGINAL theme music by composer Mat Howlett!! The countdown to JoeCon 2012 continues! Join the fun, won't you?

LiKwid wrote:I wanna know whats on joemind about the movie getting pushed back a year...

Don't. In the long run this has the possibility of being really good for us.