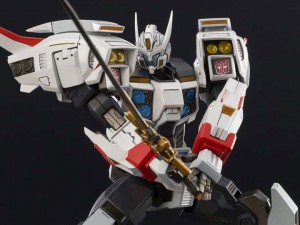 ------------------------------
NEW PRE-ORDERS
------------------------------
Kotobukiya has two new statues out this week with the My Little Pony Bishoujo Sunset Shimmer and Flashpoint ArtFX Batman. New Pop! figures include those from Dumb and Dumber, Star Wars: The Clone Wars and Inspector Gadget. DNA Design has two upgrade kits for Earthrise Scorponok. Toys Alliance, maker of Acid Rain figures, has two new lines with Annex 2179 and Oblivion land set in the same 1/18 scale. 2B from NieR: Automata is now in chibi form with a Nendoroid figure. The next Pop Up Parade figure is Erza Scarlet from Fairy Tail. Trials of Mana is getting 3 two-packs of Bring Arts figures. TBLeague has awesome new 1/6 and 1/12 scale figures coming of Horus, Guardian of the Pharaoh and Anubis, Guardian of the Underworld. Be sure to check out all these and much more! 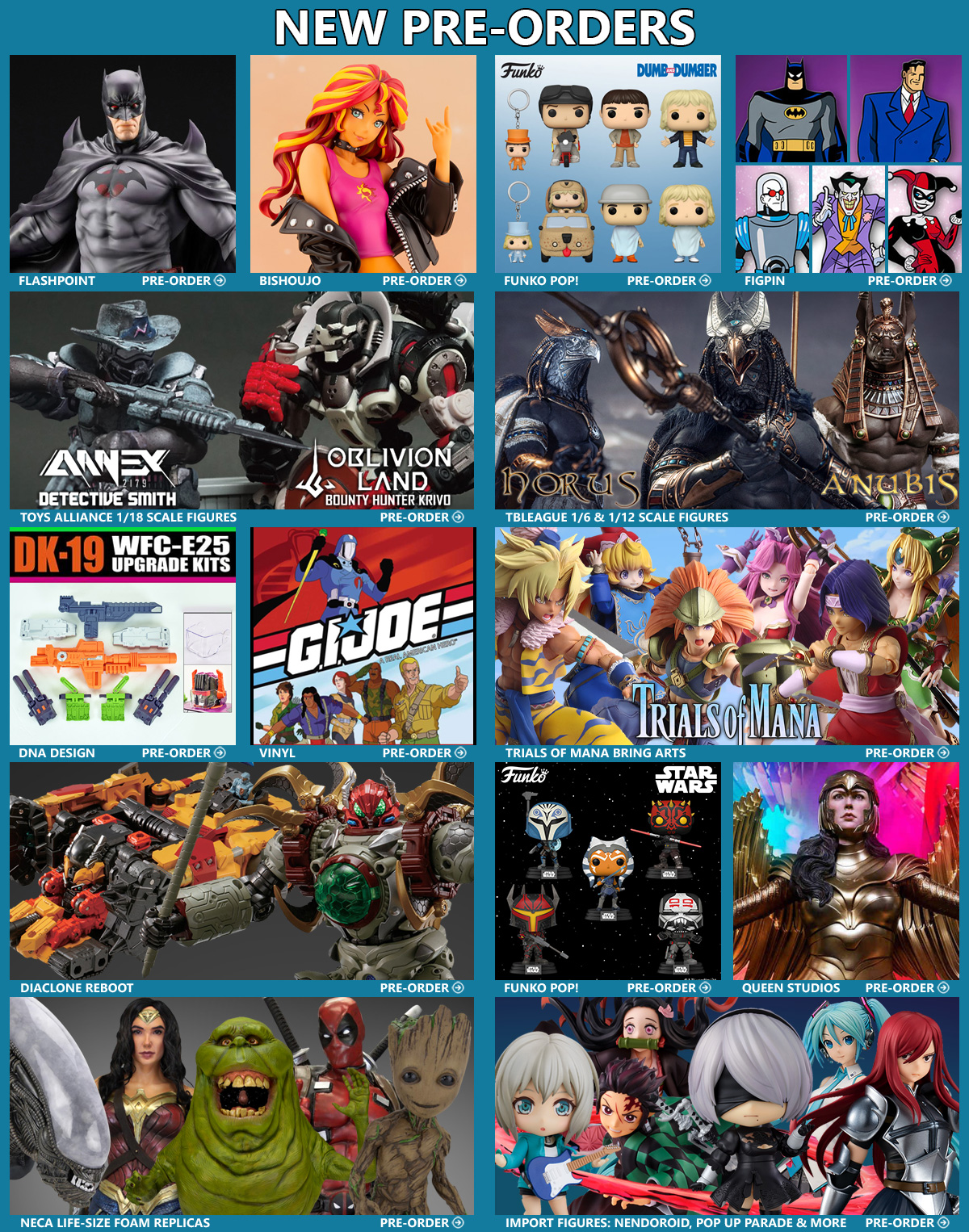 ------------------------
NEW ARRIVALS
------------------------
Tons of DC Direct figures are now in including those from the Batman: The Adventures Continue and DC Essentials lines. The Furai model kits of Drift from Transformers is here and the parts come color molded so no painting is required making this model kit ideal for beginners and experts alike. If you missed it the first time around, be sure to grab NECA's Friday the 13th Part 5 Ultimate Jason. Chucky is here! This Officially Licensed One-To-One Scale Seed of Chucky Doll is the most screen accurate Scarred Chucky Doll ever produced. Godzilla fans can now pick up the S.H.MonsterArts Godzilla figure from Godzilla Against Mechagodzilla. A bunch of War for Cybertron: Siege figures are stocked and ready to roll out including Springer, Starscream, Astrotrain and more! 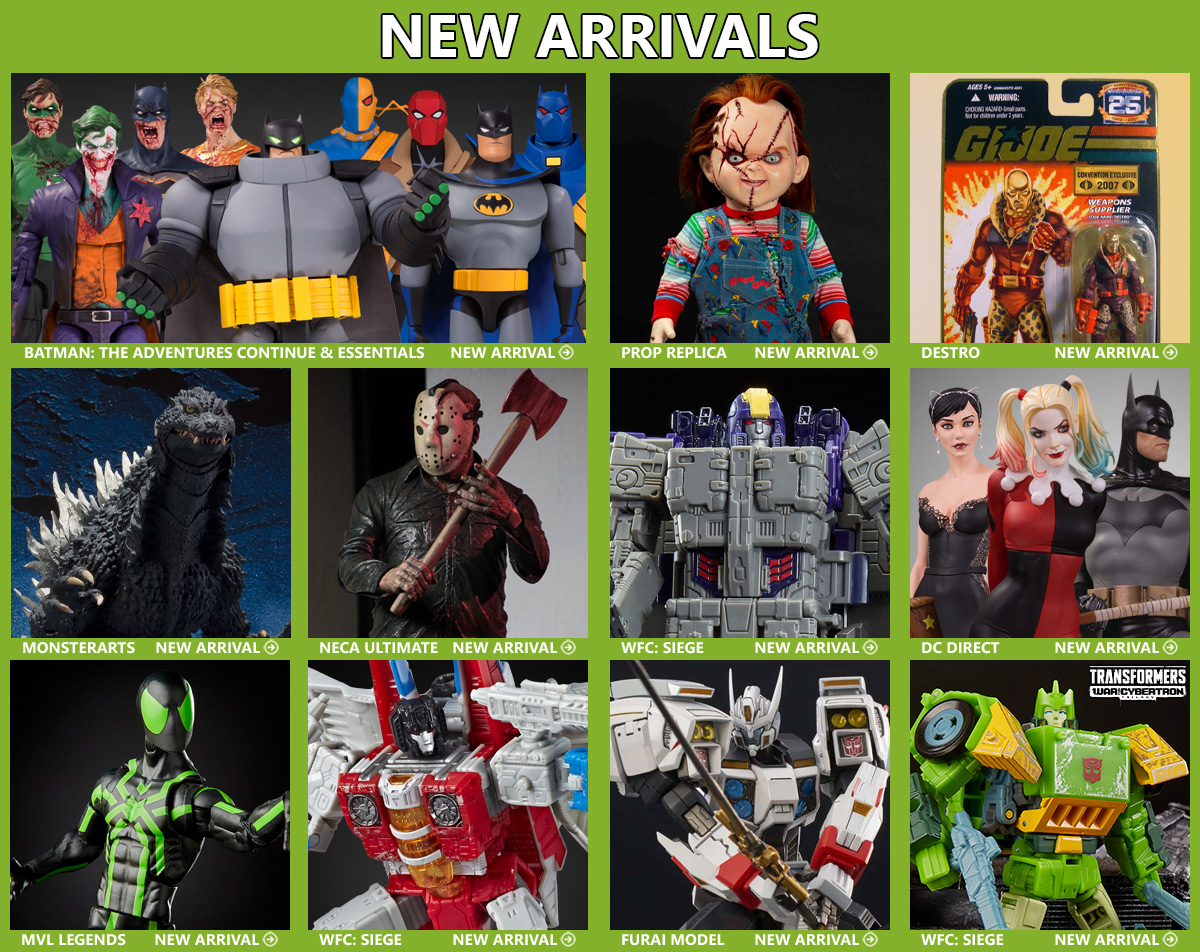 ------------------------------
NEW PRE-ORDERS
------------------------------
New TMNT Ultimates figures are up! These include Donatello, Casey Jones, Mondo Gecko, and Muckman with Joe Eyeball. Fans of Roman gladiators will find XesRay Studio's 1/12 Combatant figures to their liking with incredible body sculpts, armor and weapons. From the 5 Points series by Mezco, Batman Classic TV Series box set contains Batman, Robin, Alfred, Catwoman, The Joker, The Riddler, Penguin, and the Batmobile. Berkserk gets a new figma figure of Guts from the Golden Age Arc, while Pyramid Head and Bubble Head Nurse from Silent Hill 2 are getting reissues. Marvel Legends collectors can pre-order Black Cat from the Spider-Man Retro Legends line and anyone who missed Dani Moonstar can pre-order her as well. The Skeletor Havoc Staff replica realizes Skeletor’s signature accessory as a real-world item. 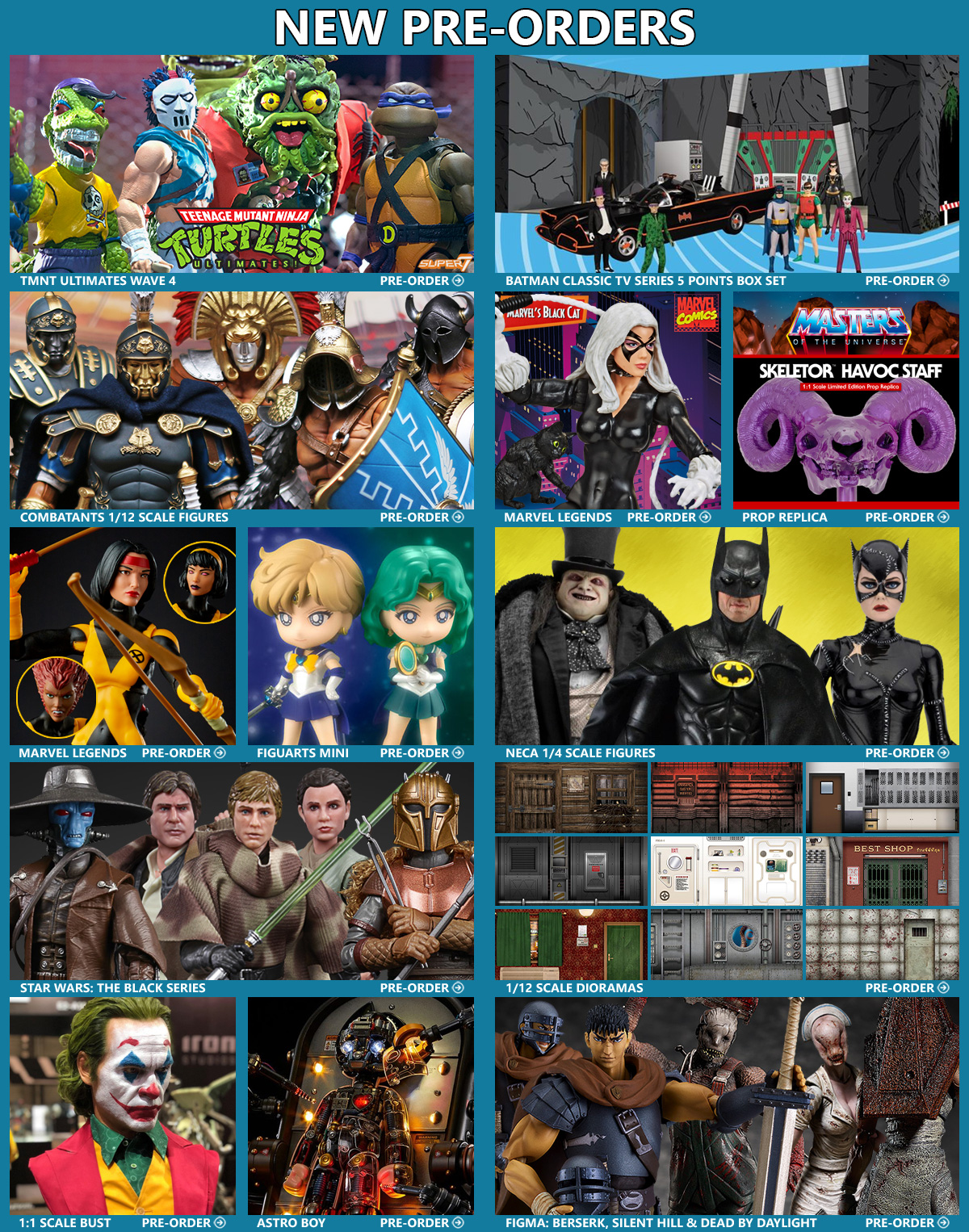 ------------------------
NEW ARRIVALS
------------------------
Based on the Batman: Hush story line, The MAFEX Batman is a fully articulated figure that features a poseable wired fabric cape and several accessories including an unmasked Bruce Wayne head sculpt. Darth Vader is here from The Empire Strike Back in the Black Series line. All Might joins the Amazing Yamaguchi action figure series! Standing about 7.5 inches tall, All Might boasts 32 points of articulation for extreme posing possibilities and includes a wide selection of accessories. MOTU and TMNT fans can now have their favorite figures as micro action figures. 52Toys MegaBox series has created the iconic Power Loader from Aliens in mini form. This Power Loader figure can change from a heavy duty alien battling machine to a compact cube form. Anyone looking for some G.I. Joe nostalgia can pick up the G.I. Joe sunglasses and call back one of the great action figure lines of all time. 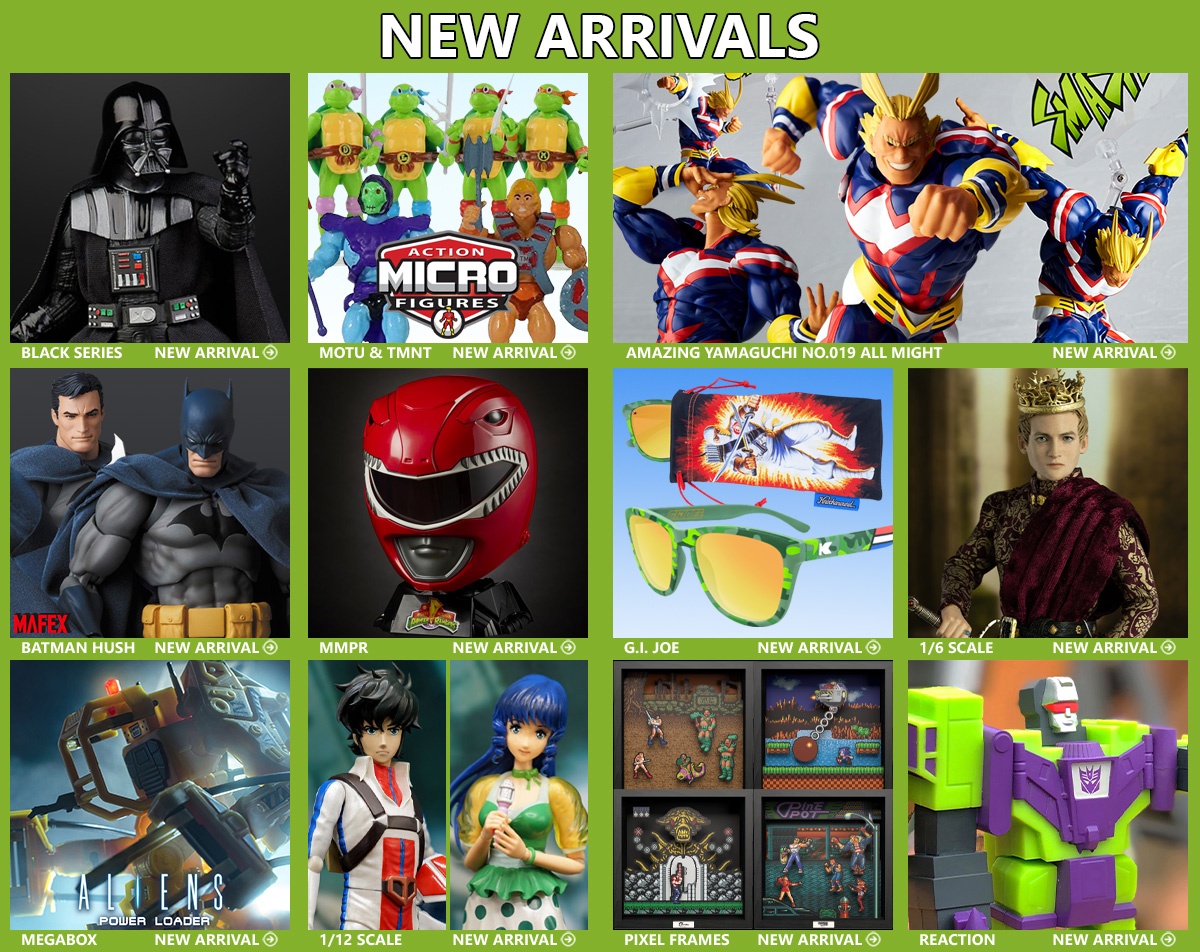