BTS Soundwave on the Horizon? 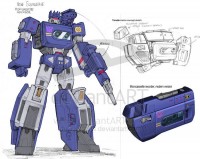 Third party toy maker BTStoys may be venturing into full blown figure territory. TFW2005 member Hound2501 has come across images labeled BTS-04 that appear to be prototypes of a Soundwave based off of Guido Guidi's micro-cassette recorder concept art. If you purchased their last offering BTS-04 Matrix of Leadership, you may recall a shadowy teaser image on the back of the packaging that does match up to these prototypes. No source is given for the images, and neither BTStoys website nor blog contain these images. The homepage does have a listing for a product labeled BTS-04, but it pulls up images of their previously released BTS-03 G1 Optimus Prime upgrade set and BTS-02 weapons pack. Additionally the resin prototype appears to able to hold a G1 Cassette.

RiddlerJ wrote:Can a real cassette fit in there? It's look like it can.

RiddlerJ wrote:Can a real cassette fit in there? It's look like it can.

Mechastrike wrote:if this is a working tape player, it's a bad move. i mean aren't cassette tapes obsolete nowadays?

I could see a nice metallic finish on that SOundwave. That would put it over the top for me.

I've got too many cassettes and not enough Soundwaves to put em in. SO this would be very welcome in my collection.

Mechastrike wrote:if this is a working tape player, it's a bad move. i mean aren't cassette tapes obsolete nowadays?

I personally would love a working tape player but it would have to play full size cassettes. Nobody used these mini ones unless you were documenting dialouge or bootlegging a band.

Also yes, cassettes are obsolete but some of us still have them and play them. My full sized Soundwave cassette player just died and needs it's guts rebuilt. It plays my tapes all warbly and sounds like it's gonna chew up the tape.
Re: BTS Soundwave on the Horizon? (1176314)
Posted by rpetras on February 1st, 2011 @ 10:51am CST
I like it!

I'd have to see the final product, and I hope it would hold cassetticons, but so far so good.

It's is funny how third party companies are now evolving their products into full figures. I've enjoyed watching the transformation take place but I would like a company to focus more on weapons..

I'll buy this figure after I see a review on him. I own two BTS products and while the quality isn't bad, I wouldn't call it amazing. The quality on the SW figure will need to be improved based on my experiences.
Click here to view additional comments about this topic at the Energon Pub Forums ...