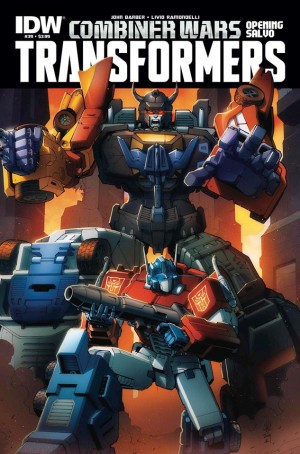 IDW Takes Seattle!
Where To Be At Emerald City Comicon

San Diego, CA (March 25, 2015) – Attendants of Seattle’s renowned Emerald City Comicon are in for surprise announcements, exceptional signings and a weekend full of fun from IDW! Taking place this weekend from March 27th – March 29th at the Washington State Convention Center, come by the IDW booth (#1802) to stock up on your collection, meet your favorite creators, and score a truly outrageous exclusive. Additionally, Top Shelf can be found at booth #1225, where you can meet the creative team behind the hit satire God Is Disappointed in You, Mark Russell and Shannon Wheeler!

Available exclusively at the IDW booth, grab yourself
a copy of the book that’s got everyone talking, Jem & The Holograms, with a variant cover by Agnes Garbowska! The cover can be purchased for $5, limit 3 per customer.

The IDW booth will be packed all weekend long with talent from across the industry signing their acclaimed work:


And don’t miss out on the panels that are sure to be a highlight of your weekend!

Saturday, 2:00 – 3:00 Room Hall C (TCC 301)
God is Disappointed in You (The Sequel), with Mark Russell & Shannon Wheeler—Last year's standing-room-only hot ticket returns -- now with even more Biblical bewilderment! God Is Disappointed in You, published by Top Shelf, is the tongue-in-cheek "condensed" version of the Bible you never knew you needed -- hilariously modern, but surprisingly authentic -- packed with cartoons by Eisner-award-winner Shannon Wheeler (The New Yorker, Too Much Coffee Man). Join him and author Mark Russell (writer of DC Comics’ upcoming Prez) for an hour of unforgettable irreverence, including Q&A, audience sketches, and the hilarious-yet-accurate "ten-minute Bible." PLUS: a taste of the Audie-nominated audiobook, read by Dr. Venture himself, James Urbaniak (The Venture Bros), and an exclusive announcement about the upcoming sequel!

Sunday, 3:30 – 4:20 Hall F (TCC 304)
Kevin Eastman: A Life With Turtles—Join the legendary co-creator of the Teenage Mutant Ninja Turtles and he talks about his long career in both comics and Hollywood, and how he brings his beloved Turtles to the world in a variety of media!

Sunday, 4:00 – 5:00 Room Hall C (TCC 301)
IDW Presents: The New Class of Licensed Comics—Transformers, Adventure Time, Star Trek, Orphan Black, My Little Pony: Friendship is Magic... What do these comics all have in common? They're all licensed comics, and although some may STILL look down on them, they're also home to some of the best talent telling the best stories around. Come hear about the good (and the sometimes challenging) aspects of working on books like these, from host Editor Sarah Gaydos (Star Trek, Disney, Edward Scissorhands), with special guests Kate Leth (Bravest Warriors, Edward Scissorhands), Corinna Bechko (Star Wars, Planet of the Apes, Once Upon a Time), Jody Houser (Orphan Black), Editor Shannon Waters (of BOOM!), Chris Roberson (Aliens, Star Trek), and Gabriel Hardman (Planet of the Apes, Star Wars).


About IDW Publishing
IDW is an award-winning publisher of comic books, graphic novels and trade paperbacks, based in San Diego, California. Renowned for its diverse catalog of licensed and independent titles, IDW publishes some of the most successful and popular titles in the industry, including: Hasbro’s The TRANSFORMERS, G.I. JOE, MY LITTLE PONY and JEM AND THE HOLOGRAMS; Paramount/CBS’s Star Trek; Nickelodeon’s Teenage Mutant Ninja Turtles; Toho’s Godzilla; Twentieth Century Fox's The X-Files, Temple Street Productions' Orphan Black; DISNEY Comics; Ragnarök from Eisner Award-winner Walter Simonson; and Zombie vs Robots by Chris Ryall and Ashley Woods. IDW is also home to acclaimed imprints such as the Library of American Comics, which publishes classic comic reprints, Yoe! Books, a partnership with Yoe! Studio, IDW Artist’s Editions, and Top Shelf Productions.

IDW’s critically- and fan-acclaimed series are continually moving into new mediums. Currently, Jerry Bruckheimer Films and Disney are creating a feature film based on World War Robot; Dwayne "The Rock" Johnson and Warner Brothers are producing a film based on Ashley Wood's Lore; Michael Bay‘s Platinum Dunes and Sony are bringing Zombies vs. Robots to film, Alex Kurtzman is producing a movie based on Locke & Key at Universal.