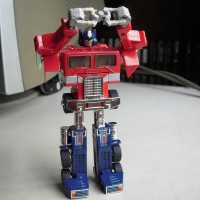 For a while now, a thread has gone undetected in our Toys Forum, the thread contained images of what seemed to be a prototype of a Matrix of Leadership for Generation 1 Optimus Prime. When new pictures of it along with other accessories showed up, it was speculated to be a new set from BTSToys, the people behind the BTS Mobile command base (aka. Classics Prime trailer).

Now due to a pre-order listing on site sponsor BigBadToyStore.com this speculation has been proven true. BBTS's price for this set is currently set at USD 19.99 and the set contains the following:
-Matrix with seating
-New articulated hands to hold matrix
-Energon axe
-Jetpack which can hold all accessories
-Ion Blaster