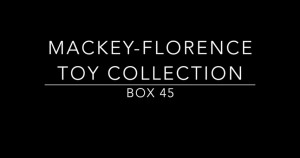 Hasbro rarities eBay seller z75sales is at it again! This time it's an unboxing video of G2 items he has had, and currently has, available for sale among his eBay listings. (Link is included below.) Before we watch a piece of TF history unfold before our eyes, let's take a small trip down memory lane with these amazing finds and their incredible auction listings.

It all started here, with a G2 Menasor auction that went for a stellar price. Followed by unreleased G2 Gobots figures, a whole set even! Not even close to finished, seller z75sales even posted auctions for other G2 rarities, including ATB Megatron! Heck, he even had a crystal clear prototype of Beast Wars Transmetals Optimus Primal!

He even shared some videos of the unboxing of this incredible collection, obtained by the estate of a former Hasbro employee. You can see the previous video articles here, here and here.

z75sales has posted a new unboxing video on YouTube showing off the discovery of a good portion of the unreleased G2 items, including the aforementioned Gobots and even includes some G2 Dinobots as well, among other miscellaneous things such as missiles and assorted accessories.

You can see all of their auction listings by clicking here, and while you're there, go ahead and bookmark it because you don't want to miss what he has coming next!

Posted 2 days ago
News Categories: Toy News, Movie Related News, Cartoon News, Comic Book News, Site News, Rumors, Event News, Digital Media News, Collectables, Game News, Sponsor News, Site Articles, Store News, Company News, People News, Press Releases, Sightings, Reviews, Unlicensed Products News, Auctions, Transtopia, Interviews, Knock Offs, Collector's Club News, Editorials, Heavy Metal War, Podcast, Contests, Book News, Top Lists
Click here to post your comment about this news story!
Re: G2 Rarities Unboxing Video (1603086)
Posted by megatronus on August 31st, 2014 @ 7:01am CDT
Do we have any confirmed background information on this enterprise just yet? I've seen some rumors about estate liquidation for the widow of an Hasbro engineer (and similar such rumors), but it would be interesting to know for certain the circumstances under which this massive collection of rarities is being sold.
Re: G2 Rarities Unboxing Video (1603117)
Posted by Black Bumblebee on August 31st, 2014 @ 11:37am CDT
I found it rather interesting (and telling) that among all these G2 toys, there was a Mirage and a Smokescreen. There's already information to support that Mirage was to be in G2 (with an alligator theme... go fig), but first I've heard of a possible plan to have SS in G2. Of course, it could just be a coincidence...
Re: G2 Rarities Unboxing Video (1603231)
Posted by Skywarp84 on August 31st, 2014 @ 10:17pm CDT
Someone should tell this guy to wear gloves while doing this. Fingerprints on chrome is a deal breaker.
Re: G2 Rarities Unboxing Video (1603351)
Posted by shajaki on September 1st, 2014 @ 1:45pm CDT
the broken blades on G2 blades... seriously makes me want to cry.
Re: G2 Rarities Unboxing Video (1610564)
Posted by LOST Cybertronian on October 2nd, 2014 @ 10:55pm CDT
Ebay seller z75sales is at it again posting rare and hard to find Transformers. He has posted the unreleased G2 gobots sets before, however this newest set is carded and Includes all 6 figures. The cards are actually mock up High Beam cards and they are also AFA graded. This set could be all yours for a cool $7,999.

ausbot wrote:Damn you highbeam I wanted to know what their names were.

We actually two confirmed names, not surprisingly reused from G1: Hound and Rumble. Hound should be a no-brainer, and Rumble is that red and white Vinny Racer. The latter was first used as RiD Side Swipe.
Re: G2 Rarities Unboxing Video (1610659)
Posted by Seibertron on October 3rd, 2014 @ 11:25am CDT

ausbot wrote:Damn you highbeam I wanted to know what their names were.

We actually two confirmed names, not surprisingly reused from G1: Hound and Rumble. Hound should be a no-brainer, and Rumble is that red and white Vinny Racer. The latter was first used as RiD Side Swipe.

So the real question becomes ... what should I call the other 4 for their galleries on Seibertron.com? Should I just use the AFA titles?
Re: G2 Rarities Unboxing Video (1610666)
Posted by Jelze Bunnycat on October 3rd, 2014 @ 11:53am CDT
Well, I can give you the designation given to them by a Toys for Tots auction, which is basically the first time they got name, with the RiD 2001 character for easy reference:

As for the other two I just call them "Mercedes" and Hound.
Re: G2 Rarities Unboxing Video (1613197)
Posted by LOST Cybertronian on October 11th, 2014 @ 2:02pm CDT
In our continuing quest to bring you rare Transformers auctions on ebay, comes a little mini-car gem. This blue version of Cliffjumper was produced under license by IGA in Mexico. This mini-bot variant and others like it are sought by collectors the world over. The figure comes carded for a buy it now price of $1,000. Click on the image to check out the auction page.

It's my favorite shade of blue.)

Also, as far as the G2 Stunticons go, I'd love to see the Collectors' Club do a repaint of the BotCon 2011 Stunticon set in G2 colors. I understand it wasn't the most popular set, but I like it and I'd get the G2 version nonetheless.
Re: G2 Rarities Unboxing Video (1613217)
Posted by shajaki on October 11th, 2014 @ 2:58pm CDT
that tops my list of bizarre... red cliffjumper art, yellow cliffjumper toy pic, blue cliffjumper toy packaged

No, that's not the stupidest possible comment, this is:

Her/his mission is to ascertain Thrustinator's exact place in the timestreams while beating the slag out of him, which is why I'd love to own this as well. Plus, seeing the '85 mural on the cardback of a toy I never knew existed always makes me feel like all's right with the universe...
Re: G2 Rarities Unboxing Video (1613384)
Posted by ScottyP on October 12th, 2014 @ 11:53am CDT
I feel like rare Minibot collectors probably look down on us rare Minicon collectors and laugh. The rarest of the rare Minicon teams (3 toys) goes for a grand, and here's this one single Minibot going for that on its own.
Re: G2 Rarities Unboxing Video (1613386)
Posted by MGrotusque on October 12th, 2014 @ 12:03pm CDT
It's so rare i could never even possibly care. Blue Cliffjumper......big woop.

Re: G2 Rarities Unboxing Video (1707026)
Posted by william-james88 on July 7th, 2015 @ 6:03pm CDT
As some of you might remember, a year ago (practically to the day), an unreleased G2 Menasor set sold for $26,815 on Ebay. Well, as it turns out, the buyer is now putting it up for bid to let someone else get this rare piece of Transformers History. There are currently 5 days left on the auction and the bidding is already nearing the 5 digit mark.

There are a few things to note though. While this is a rare and unreleased piece, there are at least 10 more of these that exist (which we know of). This is the one which is in the best quality but it is not complete. It is missing the combiner head/mask to completely form Menasor. Major bummer, I know. On the bright side, with G2 Menasor being so much in the public eye, it could inspire a redeco for Combiner Wars Menasor and then everyone can get their G2 Menasor on the cheap(er).

Sabrblade wrote:With these ones not being packaged, maybe whoever sins them could post pics of the combined Menasor form.

He wouldnt have his combiner head though.
Re: G2 Rarities Unboxing Video (1707034)
Posted by fenrir72 on July 7th, 2015 @ 6:25pm CDT
Among them, Dragstrip looks the coolest.
Click here to view additional comments about this topic at the Energon Pub Forums ...