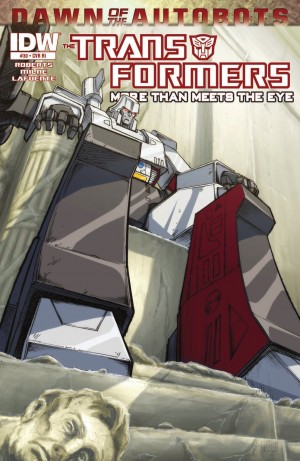 Synopsis
EVACUATION! Is it possible for a starship to object to its captain? That’s what the AUTOBOTS are asking MEGATRON as the Lost Light becomes the most dangerous place in the universe!

Everything is going amiss. Or missing. Or disappearing. On the Lost Light, that is, as we've seen so far since issue #28. And there's that coffin issue, a possible ghost, scheming and plotting and antipathies and Swerve, serving as a recap device on the first page. But that's not all going on, of course - and some things are being found, or found out.

At the same time, six months previously, the Megatron trial is coming to an end, though not necessarily as we saw it going in the first place, as some rogue 'loyal' Decepticons attempt to 'rescue' the defendant in the middle of the Luna 2 arena. And the beginning of some trialling (heh) changes in the legal process.

Clean up the bodies

Now, the end of the trial left me with mixed feelings: on the one hand, James Roberts' Megatron gains some truly great character work, but on the other, it felt, as I have mentioned before for other arcs, as if things were hurried on the lead into the rest of the plots and narratives (though not as much as the Overlord ending). On the third hand, however, so many characters are explored, from Rodimus to First Aid, to Getaway, Tailgate and even Riptide and Nautica, with a bit more of Optimus and Prowl, too. And it counterbalances it all.

There are feels emotions

Overall, then, while the 'conclusion' of the trial, on its surface, left me wondering, everything else around it makes the entire issue so developed and multifaceted that I can look over that small step I was hoping for in Megatron's story (see previous reviews for more on this, too).

I will not gush on Alex Milne's artwork, but there is a lot to say about how the line- and panel-work in the issue really fits the story being told, with some excellent white-out frames, several massive spreads and splashes, and brilliant facial expressions with some manga-esque influences throughout the entire, beautiful book. And it all graces both the trial and the Lost Light scenes, equally and consistently.

And the colours. The colours. We get to see some astonishing space-scapes from Joana Lafuente, and some fantastic lighting complementing the tone and layout of the artwork and panels, with some truly powerful dark/light contrasts for emotional moments. In addition, Tom B. Long's lettering is used to enhance only the moments that really need it, but really shines in the arena fight and scattered through the final act.

There is a ridiculous number of covers, and yes, they're all excellent. From the Milne/Lafuente main one to Nick Roche and Josh Burcham's subscription, to the thumbnailed Guido Guidi and John-Paul Bove magnificent Megatron (fitting, really) and the convention exclusive My Little Pony crossover by Tony Fleecs. Whew.

I have an issue with Roberts' endings, clearly, as I didn't think this packed the punch it could've - regarding Megatron's sentence and closing remarks, at least. But everything else really, really makes up for it, from a twist early on, to the characterisation of the big bad bot, to the development of the main plotline and the creation of more bonds, some of which potentially destructive for established others.

And it all looks absolutely superb, from lines to panels to colours to letters to expressions to space - oh the space - and it has twists, plots, endings, beginnings, the RodPod, covers, Swerve's introdump/recap and 'bomps'. Not only that: it looks like, as of the next issue, we will return to early MTMTE, too - space horror. Grab the popcorn and/or your leg.

Too many characters are opting for sardonic or otherwise witty responses. Typically - no, historically - both Prime and Megatron are sober individuals. Sarcasm, face palming and other modern, human idiosyncrasies are creeping into their characteristics which is a shame and reflects badly on Roberts; he's over-reaching for laughs. Roberts is writing a very good book, he doesn't need to try so hard in this area.

On the flip side the Swerve character interpretation, particularly now his monthly plot recap, is borderline genius.

On a different note, I'm very keen to see where Roberts, or IDW in general, take Hot Rod / Rodimus. As one of my favourite characters, I was on the look out for character arc and development, something that would show both contrition / attrition and transcendence after his, er, set of discretions. However it really hit home in this very issue that, combined with the sheer lack of progress on that score (despite hinting redemption would be a prevalent following the Tyrest saga), after 4.2 million years if he's still acting like a solipsist punk he ain't ever gonna change lol. Bit disappointing.

Although, Optimus calling out Rodimus' conceit in the Dark Cybertron saga was absolutely outstanding - in my opinion incredibly sophisticated writing.

Finally, despite any criticism above, it has to be said how much stronger the writing is in MTMTE than in RID. Although the latter's art has improved (better colouring? I can't quite put my finger on it) the writing continues to be clumsy, with 'bots frequently blurting out exactly what they're feeling and their motivations. Lazy. Prowl in the last issue being case in point.

Rant over, thanks for reading

When will IDW and Hasbro stop catering to the 37 people scattered over the Internet who like Tailgate, Brainstorm and Swerve and get back to showcasing real Transformers?
Re: IDW Transformers: More than Meets the Eye #30 Review (1585893)
Posted by Convoy on June 26th, 2014 @ 8:09am CDT

1984forever wrote:When will IDW and Hasbro stop catering to the 37 people scattered over the Internet who like Tailgate, Brainstorm and Swerve and get back to showcasing real Transformers?

1984forever wrote:More like Action Masters #30 as there were almost no transformations in this book at all.

When will IDW and Hasbro stop catering to the 37 people scattered over the Internet who like Tailgate, Brainstorm and Swerve and get back to showcasing real Transformers?

I'm going to impart a bit of wisdom i got back in the stone age (1991) from my college professor, in Introduction to Radio and Television. Something I had always known but AJ had put it best. Because radio and TV is plagued with complaints about content.

In this case, if you don't like it, don't read it.

Quite frankly, print media has a luxury that the TV/movies don't have, character development. They can spend years drawing out and evolving characters, allowing characters that under most circumstances in the TV shows would never be able to be developed... Be developed.

Transformers has evolved into a world, one with more than Optimus and Megatron. With more complex underpinnings of a society and a population. Having more characters gives it depth, personality, and interest.

The fact that Swerve, Tailgate, and Brainstorm are given time (I'd love to see more Brainstorm actually) means that the feedback they're getting on those characters is encouraging, because TRUST me, Hasbro and IDW are out to make money, if those storylines were not going over well, then Hasbro and IDW would have told Roberts to move on. IDW is selling comics, Hasbro is selling toys, they aren't going to rock the boat.
Writers don't get to write what they want, they get to write what they can sell, and what the powers that be see selling. It's obvious to me the current story is popular enough to sell.

Just because it's not what you want doesn't mean that the majority of their readers don't want it, some of us like depth and character development. For some of us violence for the sake of violence without any back story or reason is very pedestrian.
If I want mindless violence I'll watch the Bay movies (good in their own rright, I don't watch them for character development... I watch them to see things explode impressively), but even season 2 of the G1 series started getting better and had more plot. It was only natural for it to progress to where it is.

Pardon my long windedness, but I've been needing to say that for awhile. But it's been there for a bit, really, the "no one is forcing you" feeling.
Also, you say catering to a minority (to paraphrase), but has it occurred to you that you are the minority in tastes here? In light of what I pointed out (I don't say that with any baiting or malice, I swear it)
Re: IDW Transformers: More than Meets the Eye #30 Review (1585936)
Posted by ZeroWolf on June 26th, 2014 @ 11:16am CDT
Personally, I love the fact that so many different characters are being developed. I would like to think that if handled properly IDW could have multiple on goings. There's more then just the Gen1 season 1 cast now, and I'm happy that's the case, it's evolution of the brand and it's mythos.

If, and when, there is a reboot of the Transformers live action movies, it's quite likely that this IDW universe will have some impact on it.
Re: IDW Transformers: More than Meets the Eye #30 Review (1585962)
Posted by Stormrider on June 26th, 2014 @ 12:15pm CDT
Another great review. MTMTE has a great writing formula - they have an interesting mix of characters that clash and have interesting relationships. The dialogue pulls the characters and situations together and makes the story flows. And then on top of that they have all the mystery that keeps you coming back for more. Like - whose in the coffin? Or, how the hell does half a room disappear? It's things like that made TV shows like LOST so popular.