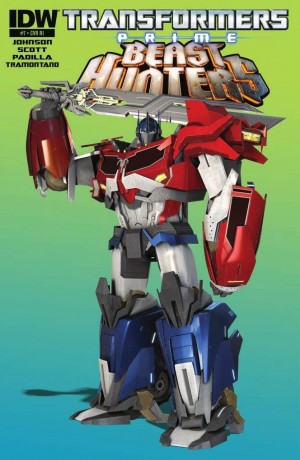 With Cybertron reborn, the Dinobots have made their way to the surface. But now, the war has returned and the Dinobots are caught in the maelstrom. With old allies joining the battle, can the Dinobots take back Cybertron?

We've seen this before..

One issue left till the end of the series, and Mike Johnson has finally upped his writing game. Following directly from Mairghread's Scott arc from the previous two issues, we step right in where we left, with the Dinobots, Chromia and the other survivors back on the surface.. waiting for something to happen, apparently.

We get a much better look at Chromia and some of the other secondary characters, like Zoom, Firestar and the background nameless ones we encountered in the series so far. There isn't that much in terms of actual characterisation, but we do get some nice shots (both artistically and personality-wise) of the minor cast.

Johnson has a much better sense of dialogue and narration in this issue, uses captions very sparely and gives some good directions for the story to tie up with the events of Prime: Beast Hunters and Predacons Rising. We might even see something bigger by the next issue, I suspect.

It's nice to finally see the series gain proper speed, but it's disappointing that it's so late in the game, with only one issue left before its end. It would've been nice to span a bit more around the cast, including more page-time for Chromia, Firestar, Zoom and even Blackout. And I'm not sure if this is Guzman on editing or Johnson on writing, but there's a glaring mistype on the final page that made my English grad self wince.

Agustin Padilla works alone this time, and still manages to keep his style a lot cleaner that earlier issues. There are some strange proportion issue later on in the comic, mostly to due with character's facial expressions, as has happened previously with Padilla's linework. But overall, I have very little to complain about. Some great panel-work as well, especially with the more action-packed scenes.

A dark tone, you say?

Priscilla Tramontano is still on colours, and she really does play around with the tonal contrasts. The colouring really suits the style of the story, and you still get a much lighter look when the surface of the planet is concerned (stars! skies!). Tom B. Long seems to have toned down the lettering in recent issues, but it makes a comeback in this one, with some excellently executed speechbubble sounds.

What could have been a very hard to make out issue in terms of dynamic panels, action scenes, fights and a lot of bot bashing actually turned out to be fairly clear to follow, with clean cut shapes where needed and good colouring assist, though there are some dips in the work this time round.

A much better blend of action and narration, possibly also due to Johnson not using the caption monologue as much. The issue is still not as engaging as the series started out to be, but it's definitely building up quite a bit to its end, next month, and fans of the animated series will enjoy some plot points in this one.

The high number of fight scenes may have made the comic hard to follow, had the artistic team not done such a good job between well-defined linework and colours, separating background and foreground nicely. Really looking forward to the next, though sad it has finally gained momentum so close to its end.