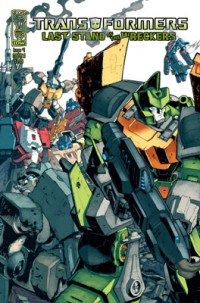 We get a press release from IDW, featuring the Last Stand of the Wreckers.


The TRANSFORMERS action just keeps coming, as IDW introduces a third new series in January - TRANSFORMERS: Last Stand of the WRECKERS. Under license from Hasbro, Inc., IDW explores yet another action-packed storyline, following the AUTOBOTS special operations crew on a mission to space to confront a new foe.

Fan-favorite writer and artist Nick Roche helms this five-issue series, which spins out of IDW's new ongoing TRANSFORMERS series. This story line gives fans a taste of what's been happening off of Earth as the WRECKERS investigate a prison planet that fell to the evil DECEPTICONS three years ago.
"TRANSFORMERS fans craving that outer-space action need look no further," said IDW editor Andy Schmidt. "WRECKERS is straight science fiction and action-robots in space with the highest of stakes! But don't look for all cheery fun and games here. It's not called 'Last Stand' for nothing!"

TRANSFORMERS: Last Stand of the WRECKERS plots a course to a prison planet conquered by the DECEPTICONS during the war on Earth. With no communication in three years, the WRECKERS face an unknown foe, who just might tear SPRINGER, KUP, and their cadre of AUTOBOT heroes apart. Roche and All Hail Megatron's Trevor Hutchison will provide covers.

TRANSFORMERS: Last Stand of the WRECKERS rounds out IDW's new trifecta of TRANSFORMERS comics, which starts with the new TRANSFORMERS ongoing series on November 18th and includes TRANSFORMERS: BUMBLEBEE, coming in December.

"While TRANSFORMERS the ongoing series and TRANSFORMERS: BUMBLEBEE are both firmly rooted on Terra Firma, Last Stand of the WRECKERS gives fans a good indication of the impact the end of the AUTOBOT vs. DECEPTICON war is having on the rest of the TRANSFORMERS universe," added Schmidt. "There is something great for every TRANSFORMERS fan right now in the IDW line-up of TRANSFORMERS comics."

Visit IDWPublishing.com to learn more about the company and its top-selling books.

Heckfire wrote:Now THOSE are Autobots. The more I see of this Nick Roache guy, the more I like.

Agreed. I can't wait to get this series!
Re: Last Stand of the Wreckers Press Release (1019108)
Posted by Ultra Magnus on November 11th, 2009 @ 9:27am CST
I'm down with this. Seems like it'll play the role of Stormbringer in this newest bunch o' books. I'm a huge supporter of IDW's work with Transformers; I've been down with EVERYTHING they've put out so far, and I'm liking the awesome things they're doing with the stories that started FOUR YEARS AGO. I have no doubt that this story will continue to deliver.