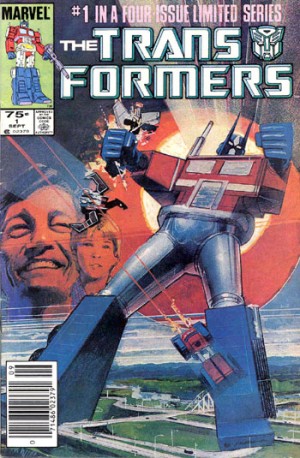 Were you planning on heading to London, UK, this 18-19th October, for the London Film and Comic Con? As a Transformers fan, you might want to after this announcement: Bob Budiansky, along with writers Simon Furman and James Roberts, and artists José Delbo, Andrew Wildman, Stephen Baskerville, Nick Roche will all be attending a special 30th anniversary bash in the comics area of the convention! Check out the press release mirrored below.


Bob Budiansky will be leading a host of writers from Transformers over the weekend of LFCC to celebrate over 30 years of Transformers!

Join us for the 30th Anniversary Celebrations of Transformer Comics

HASBRO'S Robots in Disguise have been the focus of Guido Guidi's career since he broke into the US comics market in 2003. Starting out drawing Transformers: Armada for Dreamwave, the Italian artist has since illustrated a wide range of Transformers titles for 3H Productions, Devil's Due and IDW, where he has been working continuously since 2006.

Re: London Film and Comic Con Transformers 30th Anniversary - Bob Budiansky, José Delbo and More (1609302)
Posted by LOST Cybertronian on September 28th, 2014 @ 12:47am CDT
The London Film and Comic Con continues to add guests. Herb Trimpe who drew interiors for a few Marvel Transformers issues and the mini series G.I. Joe and The Transformers as well as many covers for the series will be a guest at the con October 18 and 19. He also helped introduce Wolverine into the Marvel Universe and was the seminal Incredible Hulk artist in the 1970's. He joins previously announced guests Bob Budiansky and Jose Delbo. The next weekend he will be a guest at the Belfast Film and Comic Con. Here is a small sampling of his Transformers covers.

I would love a sketch from Herb Trimpe!

If I could ever actually make it along to any one of the occasional UK based Transformer-related Cons, I would be so happy if I could get a sketch or two as its been aeons since Ive gained any new drawings from comic book artists or writers?

I love asking a writer to do me a sketch, expecting their reply to someone clueless who they are, I confirm I know who/what they do which is why I ask!