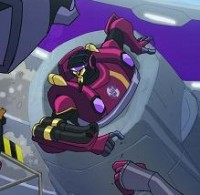 MTV Geek! has an exclusive sneak peak at the artwork from the Transformers: Timelines comic featuring the Animated Stunticons! It looks like Motormaster and company may be part of a traveling circus. Head on over to MTV Geek! for the full article and artwork!

BotCon also provided us with a press release to coincide with MTV's exclusive artwork. Here's the official press release from BotCon:

BotCon 2011 brings back Transformers Animated for one more adventure!

Fort Worth, TX - March 7th, 2011 - Fun Publications, Inc, licensee for Hasbro’s Official Transformers Collectors Convention "BotCon", is pleased to announce that BotCon 2011 will feature an ALL-NEW Transformers Animated story! Tying in to the theme of this years Animated Stunticon Convention set, this special one-shot story (dubbed Season 3.5) is written by Marty Isenberg, Story Editor for the critically acclaimed Transformers Animated cartoon series. The new 22 page story, with art provided by Marcelo Matere, will be featured in the pages of the annual Transformers: Timelines comic and will debut at BotCon 2011.

"We are very excited to be adding a new chapter to the Transformers Animated Universe" said Pete Sinclair, Managing Editor for Fun Publications. "Marty and Derrick have crafted an amazing cast of characters, and with Marcelo doing the comic art, fans of Animated will be excited to read this new adventure!"

The last time fans saw Optimus Prime and his crew from Animated, the Autobots had captured Megatron and had returned him and his minions to Cybertron. With Cybertronians finally able to relax, focus has turned from the fears of war back towards some of the recreational events their planet has to offer. And the next big thing has just rolled into town; The Motormaster and his traveling Stunt Convoy! But are these mysterious robots here to put on a show or are they planning a real demolition derby?
BotCon 2011 is being held in Pasadena, Ca from June 2nd - June 5th. Collectors and fans of all ages can register for the show this March when online registration begins. There are different registration packages available, the most popular being the Primus package, which includes an exclusive 5-piece convention set featuring toys of the Animated Stunticons! Each Primus package also comes with Transformers Timelines Issue 6 featuring the Transformers Animated "Season 3.5" story. Walk in Admission is also available for BotCon and the convention edition of the comic will be sold at the Transformers Collectors’ Club store and online after the show.

For more information on BotCon 2011 and all of its offerings, please visit http://www.BotCon.com.

Hasbro, Inc. (NYSE:HAS) is a worldwide leader in children’s and family leisure time products and services with a rich portfolio of brands and entertainment properties that provides some of the highest quality and most recognizable play and recreational experiences in the world. As a brand-driven, consumer-focused global company, Hasbro brings to market a range of toys, games and licensed products, from traditional to high-tech and digital, under such powerful brand names as TRANSFORMERS, PLAYSKOOL, TONKA, MILTON BRADLEY, PARKER BROTHERS, G.I. JOE and WIZARDS OF THE COAST. Come see how we inspire play through our brands at http://www.hasbro.com. (C) 2011 Hasbro, Inc. All Rights Reserved.

For over 15 years, Fun Publications, Inc. has been a Hasbro licensee offering fans and collectors of pop culture memorabilia news, exclusive product and family events through different print offerings, websites, collector clubs and brand specific conventions such as GIJoeCon and BotCon. Located in Fort Worth Texas, Fun Publications reaches a large audience, serving the United States and many other countries such as Japan, Great Britain, Brazil, Australia and Canada. For more information visit http://www.TransformersClub.com, http://www.GIJoeClub.com, http://www.GIJoeCon.com, and http://www.BotCon.com. I was hesitant after reading, but after seeing, it came as shock, awe, and hilarity. Love it.

Doesn't mean I'll want to keep the figures, but the comic....oooh.