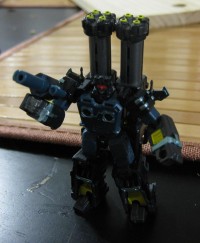 When we first saw PE-01 Shadow Warrior, we thought it was a possible Classics Rumble/Frenzy. Four months down the road, the third party figure is ahead of it's release schedule and looks to have been shipped off by many of our site sponsors. One of the first fans to get the figure is Slave, a member of the Canadian Transformers website Cybertron.ca. He's taken several pictures, has written a review of the figure, and even goes over the figure's transformation! We've taken some samples for your viewing pleasure, and you can check it out below.

*He is really tiny, I was really surprised to see the size of the box he came in. I thought I ordered an old Cassette Tape. He's actually a little bit taller than a Match box.
*His Backpack Guns can be stored in his Cannons
*He's very loose in Shadow Commander's hands
*Incredibly detailed and perfectly articulated

Be sure to check out the entire gallery and review in the forums of Cybertron.ca.

And the fact that they have so many options for 'customizing', it's pretty sweet!

I have to say they make much better classics versions than the speakers for Takara's music label. The reissues are great, but they don't really fit with Classics line as far as articulation goes, and there is no 'piledriver mode' (at least until you buy CrazyDevy's piledriver arms).

Re: PE-01 Shadow Warrior Pictorial Review (1049118)
Posted by El Duque on February 20th, 2010 @ 10:10am CST
I got my pair in yesterday, very nice little figures. I had to sand down the peg on his hand gun before he could hold it, not that big of a deal though. My Shadowcommander set is in storage so I haven't had a chance to try to attach them as shoulder cannons. I really hope they decide to release these in blue and red. They would be perfect Classics Rumble and Frenzy.
Re: PE-01 Shadow Warrior Pictorial Review (1049119)
Posted by DoubleOScorpio on February 20th, 2010 @ 10:12am CST
I'm loving the look of this figure. Bring on the red and blue repaints!!!

MaverickPrime wrote:it looks really cool, but I´m a little restricted in terms of internet-sold toys, so it´s gonna be hard for me to get one, but it really looks nice, and frenzyrumble already did the repaints!!!!

Geez, that guy is FAST! I think he has done some AWESOME customs, like that Devastator made up of other random Transformers like Energon Demolisher and Barricade!
Click here to view additional comments about this topic at the Energon Pub Forums ...