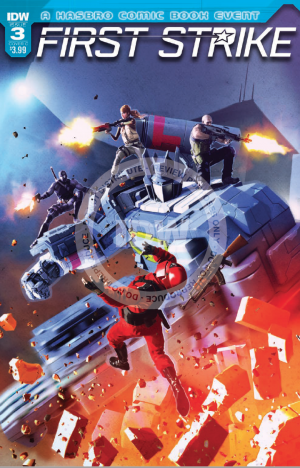 Last Issue:
The Evil Colton-lition's attack on Cybertron continued and the purpose for their attack unfolded. In protecting the planet Earth, Colton and his crew of baddies from across the IDW-verse have decided to take matters to the extreme -and try to destroy or poison the only source of power and sustenance for the Cybertronians located in the core of the planet- effectively hoping to subsequently destroy the robotic population, and thus, the threat to Earth.

This Issue:
The journey continues with Evil Joe Colton and company making their way to the core of Cybertron. Enter the Scarlett led GI JOE team, Soundwave, the Victorion twins, and MASK members Tracker and Baker (without vehicles?).

The real focus of this issue is the continuance of the action from the previous two with the newly arrived group of JOES now making their way to find and stop Colton using Soundwave’s outlier abilities and prior knowledge of Cybertron. Seems like it should be ‘game over’ for the bad guys, but what, not quite? Do the bad guys still have another trick up their sleeve? 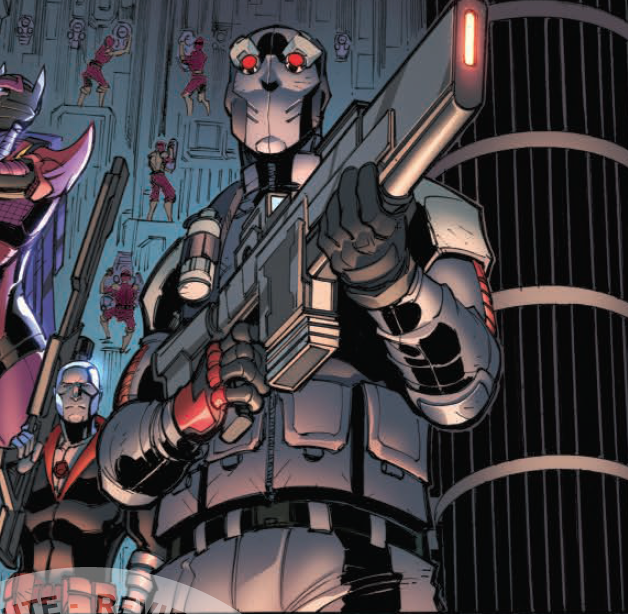 Ignore this random generic bad guy placed in an important spot in the image...focus on the real bad guy whose face is also covered...but by a helmet.

As discussed in previous reviews, there is another short story reflecting the gathering of the baddies, this time focusing on Colton going to see old Adventure Team buddy Miles ‘Mayhem’ Manheim. One feels renewed pain for Blitzwing, and perhaps gains a new level of understanding about Manheim’s level of cruelty, as they experience this part of the narrative. Even Colton has to take a step back when observing his cruelty. How was he ever a part of the Adventure Team, a team with goals that are mostly along the good spectrum?

The Art:
The whole art team (as mentioned in reviews previously) continues to do a very admirable and enjoyable job presenting the human and Transformer characters in what are mostly action-packed scenes. Max Dunbar continues to do excellent work with humans in exciting action poses and expressions, but at times his Transformers seem a little bit flat -much less dimensional than his humans- or oddly proportioned. You might be able to blame it on that they are robots, sure, but Max certainly seems more adept at humans. I do love what he’s been doing, along with his buddies, Ander Zarate and Tom B. Long, in representing the excitement and sometimes desperation of the story the way they have. I imagine it’s pretty fun to draw, color, and visually emote, all the destruction and mayhem (pun intended) that they have been able to.

The Story:
Scott and Rodriguez continue to smash, bash, and crash us with all that is going on in the story, working to extend what could be a one issue battle across a few issues to set up the series. While it seems highly unlikely that this idea of Colton’s would work given the colonies and other possible sources for energon, I’m interested to see what happens now that we are past the incursion, and we know the purpose of Colton’s group. The baddies seem primed (another pun?) for some typical baddie back-stabbing, as we see the bonds that formed them loosening a bit, kept together to this point masterfully, by Joe Colton. The good guys as evidenced by the end of this issue, seem to be going the typical route of misunderstanding and over-reaction to the idea of a team up. I always remember my 80’s super heroes having to have a small misunderstanding battle, before realizing they had the same goals or ideals, and being able to team up (X-Men Vs. Avenger, X-Men Vs. Fantastic Four…). The council seems to be heading this direction with GI JOE. Similarly to how the governments and people of Earth are blind to the distinction between who are good and who are evil Transformers, it seems the same will possibly ring true of humans visiting/attacking Cybertron now. We’ll have to wait and see on that one until next issue though. 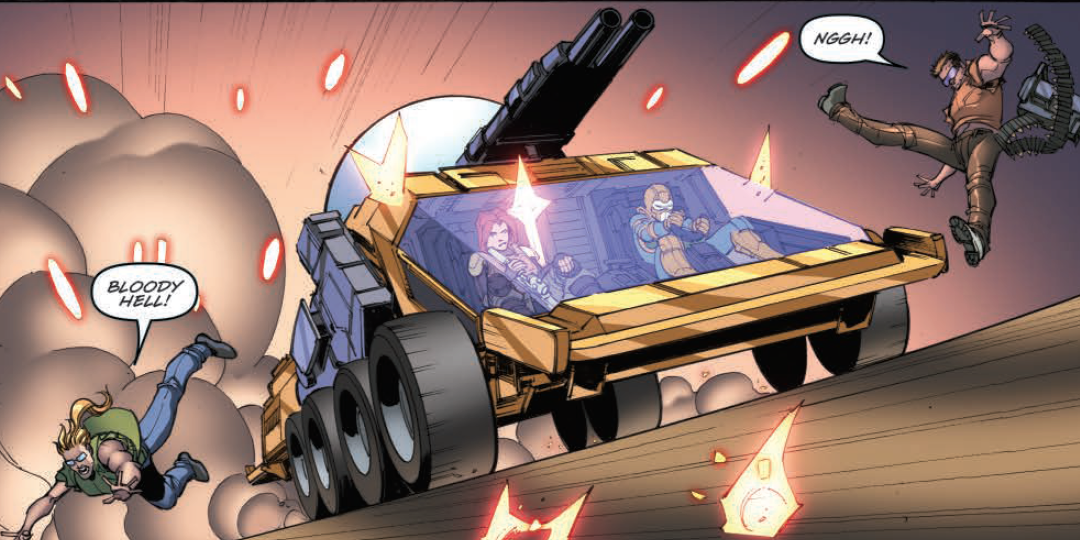 Never leave your toys around for someone else to pick up and play with.

Final Words:
I’m still really interested and entertained. I’ve said this before, but It’s really close to the GI JOE - Transformers that I wanted as a kid, and even adult. Not a one off mini-series meeting, but purposeful interaction that has repercussions into the existing individual stories. The master and student relationship of Joe Colton and Scarlett, and the growth of Colton’s character as not just this alien fanatic have been satisfying. Now add the fact that Soundwave and Scarlett are working together, and seeing similarities between their own situations —prior allegiances and ideals seeming to lose glamour and maybe legitimacy when the most meaningful person to them is gone or changed- is making for some really cool relationship pieces. Scarlett too is starting to see many things differently than she had during Revolution…

Speaking of characters, Soundwave has taken center stage again. He’s amazingly been turned into a very, very interesting character through all that IDW has put him through. He’s a whole lot more than a cool voice carrying a small army like he was in the G1 cartoon which made so many love him.

I can't tell if he's smiling under his faceplate or not...

I’m looking forward to seeing more of the bad guys personalities come out as they continue to pick at each other, and each of their ‘special skills’ is required to continue to or achieve the goal.

Very significant for Transformers fans!!! Soundwave shines, the twins not named Xamot and Tomax are becoming interesting, and Blitzwing, somebody needs to save Blitzwing… 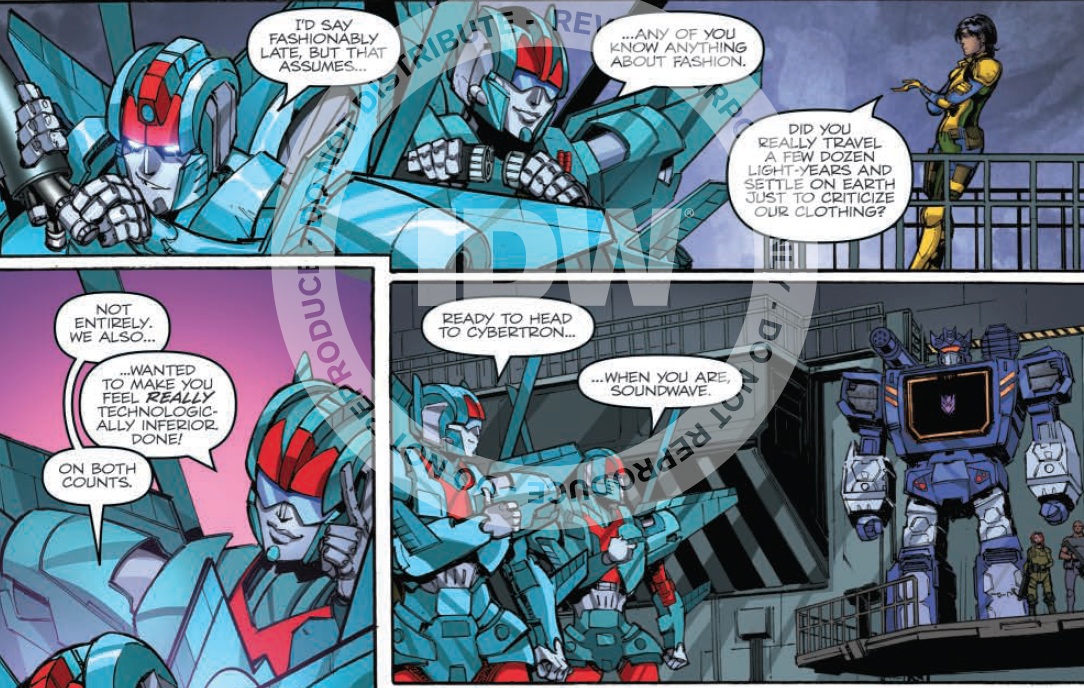 Variant cover is spot on. And I wanted to just ignore it...sneaky. 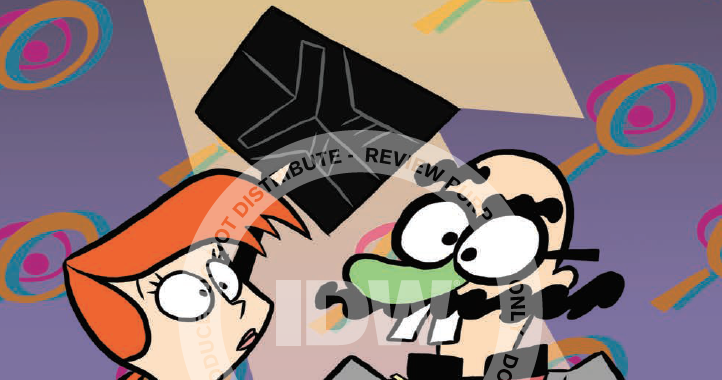 I stand by what I said Va'al

I grumble at you audibly.
Re: Review of IDW First Strike #3, Featuring Transformers, G.I. JOE, and M.A.S.K. #HasbroFirstStrike (1910683)
Posted by Kurona on September 13th, 2017 @ 12:15pm CDT
Sssso yeah, if anyone's gonna read this -- do not read the 'previously on' section. It's accidentally the previously on section for next issue -- hence spoiling everything in this issue before it even begins.

I stand by what I said Va'al

I grumble at you audibly.

Please be aware that this preview contains big spoilers for Micronauts: Wrath of Karza #5, which isn't out until next week, so if you've been following that miniseries, read ahead at your own risk.


Rom, remaining on Earth as the events of First Strike take place, finds himself in a most unusual team-up… with Earth’s smallest heroes, The Micronauts! Together, these two forces must prevent a catastrophe on Earth even while Cybertron descends into chaos! 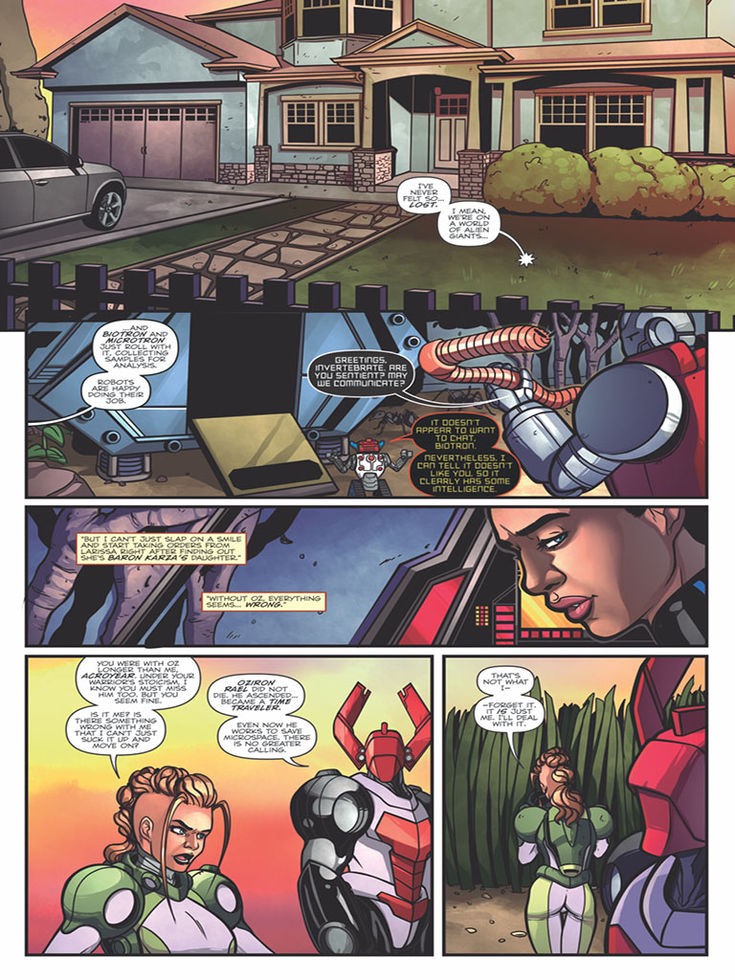 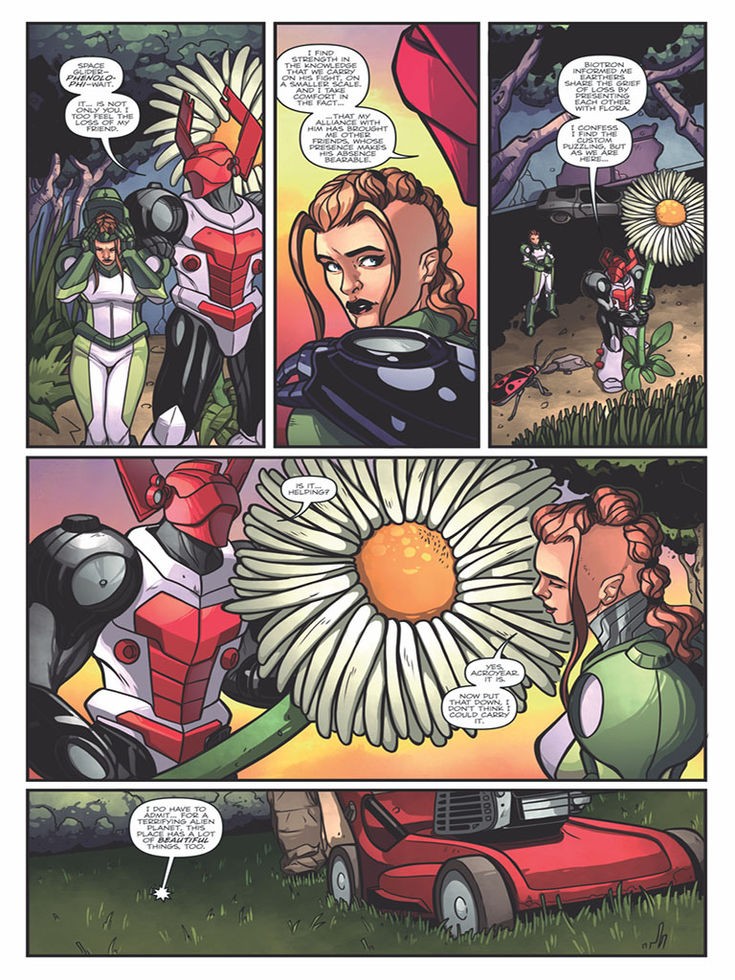 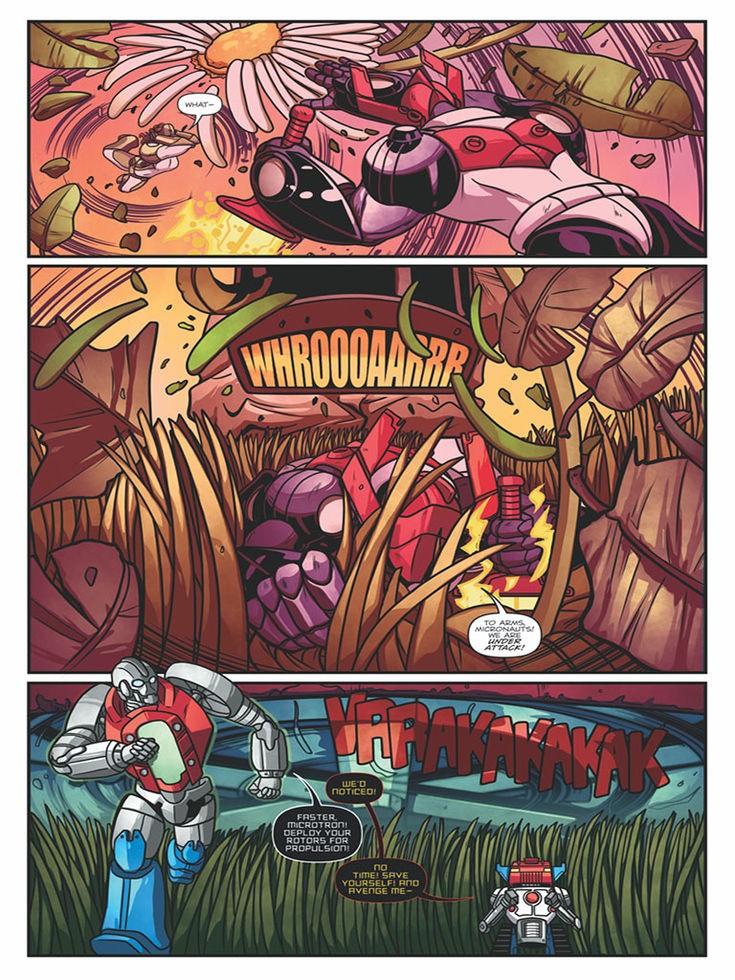 Re: Review of IDW First Strike #3, Featuring Transformers, G.I. JOE, and M.A.S.K. #HasbroFirstStrike (1910832)
Posted by Bounti76 on September 14th, 2017 @ 4:16am CDT
And saving the Hasbro-iest preview for last, but certainly not least, we have the first three pages of First Strike #4! Wow, September 27th is just going to be packed full of comic-book goodness, isn't it? Make sure to pick this title up on release day and come back to the Energon Pub forums to discuss it when it's reviewed.

Captured by Transformers! Even with the Autobots on their side, G.I. Joe is in trouble! Starscream doesn’t trust anyone, much less armed humans who show up during Cybertron’s darkest hour and he’ll do anything he can to keep G.I. Joe under control—including let COBRA get even closer to their goal! 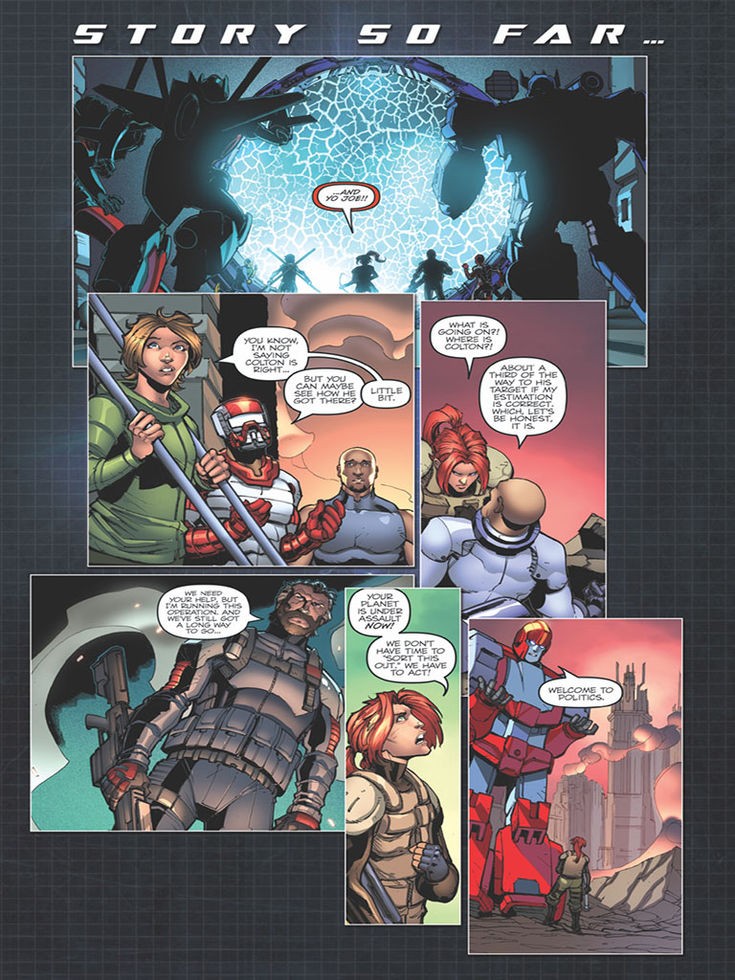 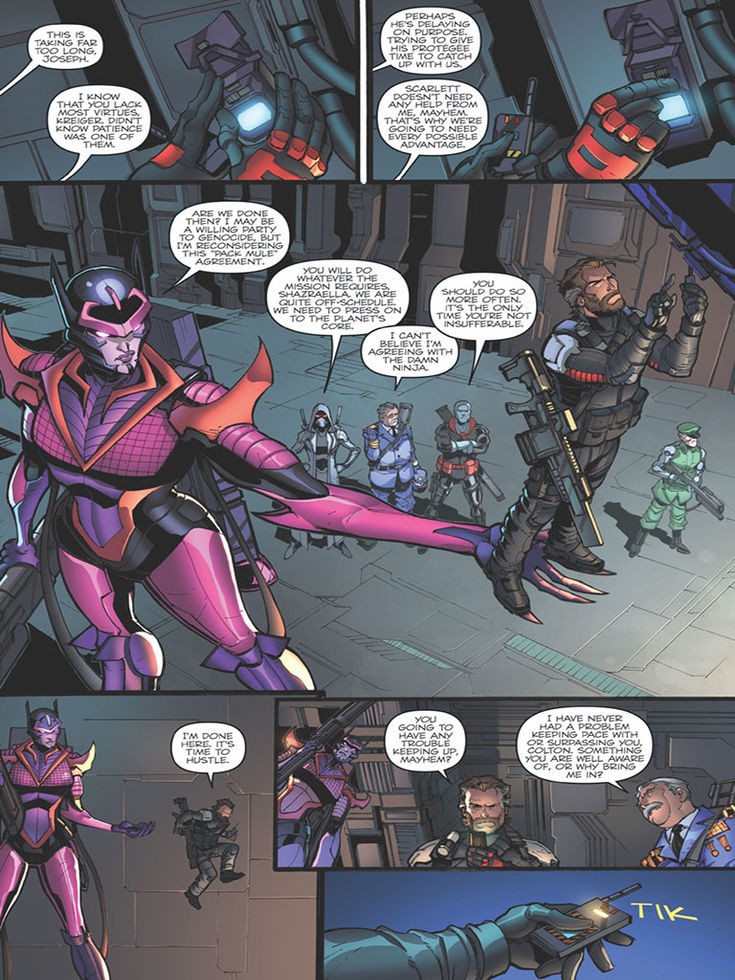 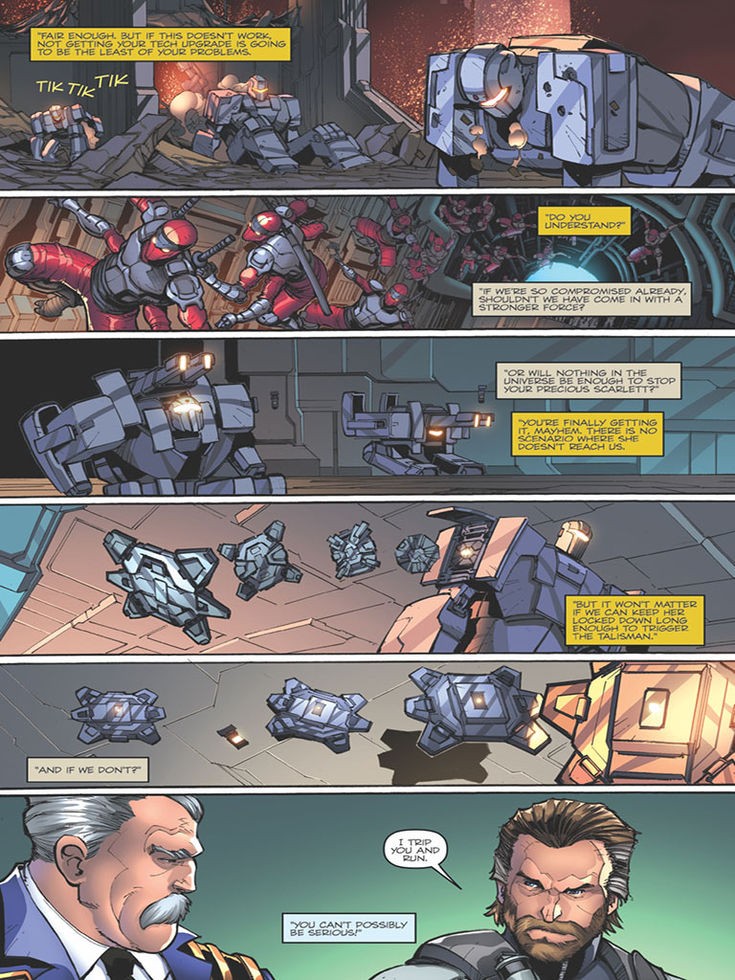 dragons wrote:like art its shame no comic stores around me to check out series

Disclaimer: that's US centric, if you're elsewhere I don't have instant recall for helpful resources
Re: Review of IDW First Strike #3, Featuring Transformers, G.I. JOE, and M.A.S.K. #HasbroFirstStrike (1910920)
Posted by Big Grim on September 14th, 2017 @ 11:20am CDT

ScottyP wrote:In this continuity, Miles Mayhem had all of the vehicles built based on Cybertronian tech derived from Blitzwing. The Rhino was given to Bruno Sheppard, who has the half metal face in the pages above. Sheppard has beef with Matt Trakker because Trakker focused on a mission instead of saving him from the fire that messed up his face.

Cliff Dagger was introduced in the MASK Annual and does have the Jackhammer, but he hasn't been used in several months.

Cheers. I loved MASK as a kid. Firefly had to be my favorite vehicle though.

Daniel Adkins wrote:The actual reasoning is even stupider than that.

I had blocked that out of memory. The MASK book is so bad. I wish it weren't :/

So not worth picking up?

Big Grim wrote:So not worth picking up?

I'm so far behind with TF and IDW issues.

I'd say if you can get the trades later at a big discount (aka Amazon or through an inevitable digital sale), you probably won't hate it. That's as close as I can get in good conscience to recommending it.