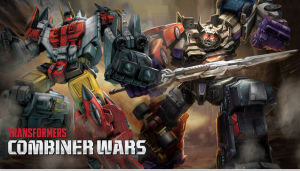 Shown today at the Hasbro Brand Panel was a short promo for Transformers Combiner Wars. The Autobots and Decepticon both mastered the power of combination to become bigger, stronger and more powerful. The battle may be won for now but the combiner wars have just begun. Check out the promo video embedded below.

I got sound.. But,,,,, I don't get it..
Cause the Buzz is over.
This would of been A smart thing to do Last Comic-con #SDCC.
But now. Like Qoui!
For one minute I was hoping it was A trailer for like A 95mnt animated movie. Ya know- Like DC does. But "Hell No" why would they do something Awesome like that¿

So what is the purpose of this ??
Also The comic story is over. An foolishly way to short! They coulda/SHOULDA done so much more wit "Combiner Wars" like dove into the ethos of certain gestalts like Devy with Prowl. & put out Giant one-shots, one for almost every combiner. Where it just focuses on the pieces of that Combiner past &/or present. Like A Menasor one-shot comic it would of sold thru the roof! With special SDCC cvrs an stuff.