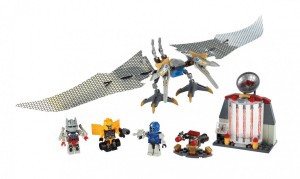 The Seibertron.com news team has been working tirelessly to bring you the best of Toy Fair 2014 and we're not stopping yet! Hasbro's official images keep rolling in and this time? Kre-O! Yesterday, we presented our in depth and high quality gallery of the newest Kre-O sets, Kreons and combiners. Today, we present the official images from Hasbro to round out this portion of the Toy Fair reporting.

So, without further ado, we present the official Kre-O images:

I might even buy some of the better ones at full price. Lockdown and Hound look particularly appealing. I think Hasbro is doing much better with Construct-bots this time around. Also that red dino from the simplified line looks happy to see me
Re: Toy Fair 2014 Coverage - Official Hasbro Product Images (Kre-O) (1551337)
Posted by Va'al on February 16th, 2014 @ 1:33pm CST

welcometothedarksyde wrote:Also that red dino from the simplified line looks happy to see me

I could not stop chuckling as I uploaded that image.

Re: Toy Fair 2014 Coverage - Official Hasbro Product Images (Kre-O) (1551338)
Posted by Sodan-1 on February 16th, 2014 @ 1:34pm CST
I've maybe changed my mind about getting all of the deluxe and voyager Dinobots. The raptor dude looks stupid with all his claws, feathers and his hard hat, and I've never been a fan of the spinosaurus. I always thought it looked like the dinosaur all the other predators took the piss out of, with its big flashy sail and a snout like a pterodactyl. I might pick up Bulkhead though. With the exception of the weird forearms he looks like he'd make a pretty awesome enforcer-type.

With how often his toys have a screen-face, I'm wondering if Lockdown's supposed to be a big reveal in AoE... which is odd since it's not like he'd be instantly recognized by the common moviegoer.
Totally going to give Kreon Lockdown a gunface.

Still no names for those Micro-Changers...

Autobot Genocide wrote:I will end up buying all of these , Even though i think the Dinobots are looking a little to much like Beast hunters when it comes to the aesthetics and the colors are a bit wild for me, guess we will have to wait and see see if there movie accurate .

no dinobots are not movie accuate in colors they are more silver, grey looking dino modes in trailer if dino bots have color to them in bot mode in movie may not see much of it, something Hasbro roadbuster is making me not like it as much to fansproject version which sucks armor card looks great bot mode uneasy with,.

Going to start off with Generations:

Totally dig Nightbeat from Bumblebee. So glad that I couldn't find Goldfire. I was going to get him for the sake of owning at least one version of the mold, but seeing Nightbeat, I'll make sure to pick him up.

Windblade looks nice when she's transformed properly. Probably will pick her up.

I wish they had done a G2-accurate deco for Jhiaxus. For those who say that the deco would look wonky, the deco on the retail versions of the Fall of Cybertron Combaticons were pretty wonky themselves.

There's only two things that bug me with Sky-Byte; his claw/fin arm and his legs. I feel like the arm should be larger, and I do not like the looks of his legs.

Jetfire is perfect. I like how his Macross Valkyrie head is actually a straight-up mask, and his cartoon-accurate head is the real deal.

I'll be anxiously awaiting more Generations reveals. So far, it and other Classics-affiliated figures are a big part of my collection.

On to the Age of Extinction figures:

I'm happy to see the Age of Extinction toys to be properly transformed. They look much more appealing than the galleries implied.

I'm torn on the Dinobots. I'll probably pick up at least some of them, mainly Slug and Strafe. Scorn looks cool, but Slash has got some issues with stabbing himself with his knees. I don't know which version of Grimlock I like least; Voyager looks the best, but it's too small. Leader is the best size, but the T-Rex mode looks disproportional. I'll wait for some in-hand images to make a final decision.

Even though we didn't get official images for him and Bumblebee for whatever reason, Crosshairs looks awesome, will probably be picking him up.

Drift's deco still befuddles me. If he's primarily black with teal accents in the film, then where did the blue come from?

I mean, he looks cool, but his deco bothers me as much as Generations Jhiaxus.

Hound looks great, but I don't like the accordions that are his arms. I doubt he'll have sprongy punchy arms in the film.

Galvatron looks... generic. That's all I can say. If he had more color on him, I'd bite some more. Really, it depends on how he's characterized in the film before I make a final decision.

Dead Metal wrote:Gotta say the Generations Movie Dinobots look awesome. Sadly Grimlock's dino-mode looks terrible on both the Leader (too long and flat body) and Voyager (too fat and short). But the bot-mode looks damn fine! It does kinda look like he has limited arm articulation and suffers from "monkey arms".

Actually, Leader Grimlock and Voyager flat-nose OP clearly have wrist swivels, so that's a not to the monkey arms on them.

Sadly I don't see any wrist swivels on voyager Grimlock.

Along with Penisaur. Hasbro: Getting more women into Transformers, for Year of the Horse.

I'd take offence and challenge you to a duel, but I know enough about you to know you'd kick my ass

will definetly get jetfire and roadbuster. closest ive seen em come to their source material incarnations in ages.

the dinos are the real winners for me though.

will definetly get the grimlock with the black legs with the golden mace (cant fecking tell which is leader/voyager/basic on the images seen) seems to be the one most porportional.

strafe and slug look much better than i epected and im probably gonna get the spinosaurous one too. the raptor one looks daft though. keep thinking of that beaswars one from way back that was based on an archeoptryx.

all in all though it bodes well for the coming film . ironically i'd probably be happier with a more flim accurate steel grey paint scheme on the dinos. but thats a small complaint. these guys coulda been ALOT worse.

cant wait to see the in hand images.

I like Nightbeat. I'm glad he's not just a Jazz repaint too. Too bad I already have Bumblebee from that mold, but this will do. I'll probably transform his bot mode with doors pointing downwards to differentiate.

It is a little unfortunate that Jetfire's chest is such a cheat, but I expected it as soon as I saw the different canopies in each mode. He looks super cool regardless and will be inhabiting my MP shelf.

Hound would be better without those noodly arms. His arsenal is awesome, and the truck is really cool too.

I wish Evasion Mode OP's upper arms were actually silver like that on the actual toy. Looks a lot better that way. Still a definite buy at this point.

With all the awesome reveals we got here, just imagine how much more awesome BotCon is going to be with even MORE reveals!

And then SDCC with EVEN MORE! Oh sweet mercy!

I'd take offence and challenge you to a duel, but I know enough about you to know you'd kick my ass

With all the awesome reveals we got here, just imagine how much more awesome BotCon is going to be with even MORE reveals!

And then SDCC with EVEN MORE! Oh sweet mercy!

Lord Almighty, the last thing I need is a nerdgasm-induced heart attack.
Click here to view additional comments about this topic at the Energon Pub Forums ...