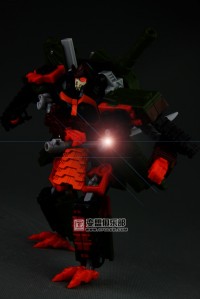 HK TF user - Chenkofs has written a review (in chinese) for upcoming ROTF Bludgeon.
Below is the translation of the review by our Seibertron member-Real Devastator:


ROBOT MODE: ★ ★ ★ ★ ★
After more than ten years sitting in the back seat, the leading role in G1 UK version and the G2 comic book – The Bludgeon is finally having a proper toy.

Initially when the toy arrived and played with it for a while, I was a bit disappointed. My thinking was the designers traded off some features for the rotating tank turret.
However, after carefully reading the instructions, it was found that the second weapon is hidden inside the turret. And the tank barrel becomes the holder of Bludgeon sword. There are also two holes at the side of the tank, this made the toy looks even more like Japanese samurai warrior.

The only complaint, Bludgeon’s face is a bit friendly. Not evil enough.


Weapons and equipment: Long sword (slotted in tank Gun Barrel), a smaller knife that can slot in at Bludgeon left hip.

Mech Alive features: Lift the knees up and down will rotate the mechanical parts on Bludgeon thighs.


Alternate Mode: ★ ★ ★ ★ ★
Tank mode make reference to the German Leopard-2 Tanks, the turret can rotate 360-degrees. (classic 2.0 Galvatron should burst into tears)
However the barrel can’t lift up or down.

The treads are made of rubber, but in order to take care the younger toy players, auxiliary wheels are also added in.
Turret fence, additional armor, laser range finder / sensors, engine cooling and other details are available in the tank mode.
Rotating turret is equipped with a machine gun, and two missile / grenade launchers on both sides.


Movable Level: ★ ★ ★ ★
The head can turn left and right, the shoulder can lift up and down, two elbow joints, No waist movement, the thigh can move front and back, as well as left and right.
Overall Bludgeon has good of mobility. 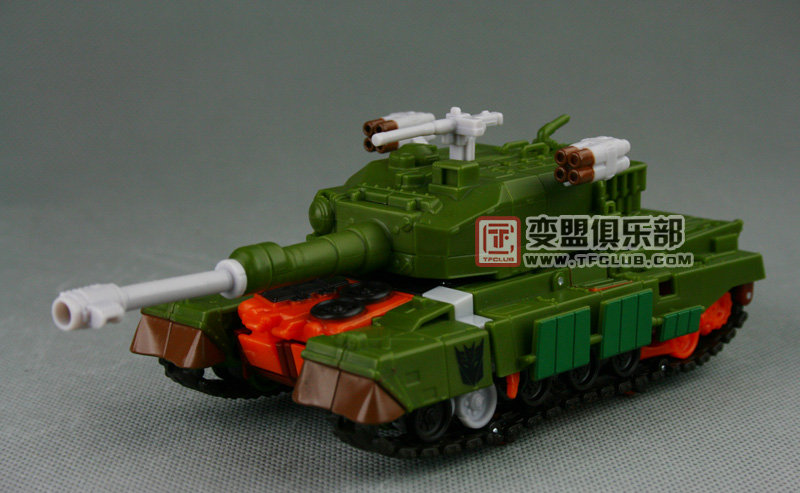 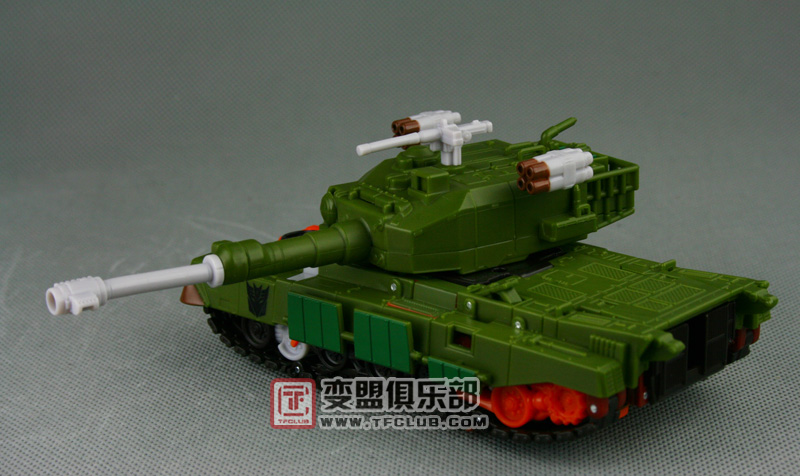 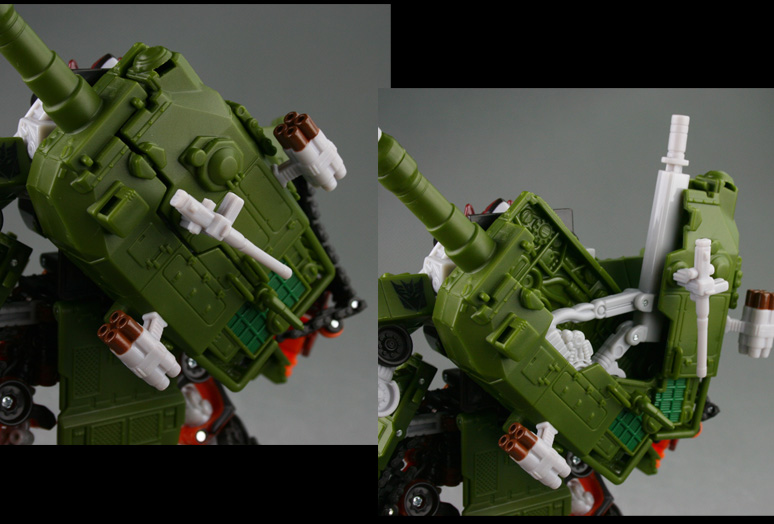 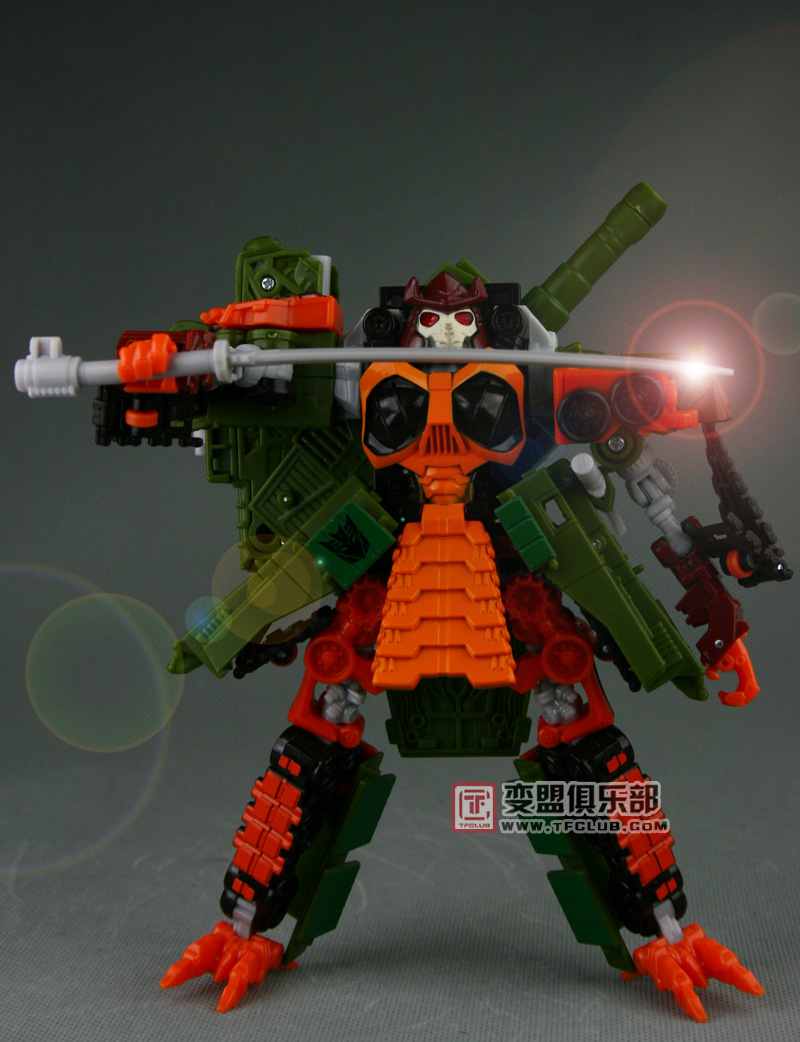 Stay tuned to Seibertron for all your latest information on Transformers.

The head sculpt looks pretty close to Bludgeon (I can see the "little too nice" as mentioned in the review) and the colors are vibrant enough, but a few things:

1) The tank mode seems to be a a mixture of Movie deluxe Brawl and Universe Galvatron. I understand there is only so much you can do with a tank, but when we've seen 2 figures released in the last couple years that look the exact same, it just warrants a "meh".

3) The feet are ugly. A reversal to the blockier feet of yesteryear would be welcome; way too many Universe and Animated figures had human-esque feet which not only look odd, but create balance issues. Bludgeon's feet look like they belong on a bird of prey, not a robot-skeleton.

4) The unpainted sword. Yeah, yeah, the usual cost savings of a few cents to apply some paint on a narrow piece of plastic...I get why they don't paint the whole figure. Still, it looks bland in robot mode and worse in tank mode.

Still, a figure I'll add to my Classics collection (note: I am a hypocrite), but I won't love ye, Bludgeon!
Re: Toy Review of ROTF Bludgeon (1010941)
Posted by Heckfire on October 18th, 2009 @ 11:49pm CDT
*drools on keyboard, shorts out laptop*
Re: Toy Review of ROTF Bludgeon (1010955)
Posted by Ravage Eject on October 19th, 2009 @ 12:55am CDT
no death for prowl, I think the spindly arms you mentioned are intentionally that way to better invoke the G1 image of a skeleton wearing Samurai armor. All in all I do think the face could have been a bit creeoier, but is still skeletal nonetheless. I have to say that, for me,this figure is a WIN and as soon as I see him I'm snagging him.

Re: Toy Review of ROTF Bludgeon (1010959)
Posted by Trikeboy on October 19th, 2009 @ 1:47am CDT
This looks like it could fit into the movie line or the Classics/Universe line. The limbs look skeletal which works for Bludgeon. How big is he compared to Classics Megatron?
Re: Toy Review of ROTF Bludgeon (1010988)
Posted by alldarker on October 19th, 2009 @ 4:51am CDT
I too couldn't resist snapping up this figure (MISB, but no instructions), and I am enjoying this toy very much.
First of all, I'm a tank fanatic, so the alt mode ticks the right boxes (BTW, various sources say it's actually a Japanese T-90 tank, rather than a Leopard-2, which makes a lot more sense considering Bludgeon's Samurai theme). The molding of details is excellent, and I especially like the brown mudguards on the front. The one I got was actually mistransformed in the box, with the arms which make up the front of the tank turned the wrong way. This also causes the front tracks to be much looser than need be, although this is an easily accessable and fixable problem with a small screwdriver. I wonder if this will be a recurring problem, though...

Conversion to robot mode is indeed somewhat simple, but non-frustrating, intuitive and fun. I didn't miss the instructions at all.
The look of the robot mode is excellent. The face might indeed be a little too 'friendly', but the skeletal samurai here is still very evident. Like Ravage Eject states: the spindly (whitish) arms are definietly a conscious design choice to make them look skeletal, and look much better when seen in person. Posability is good, especially in the arms, although the legs are hindered by the armor flaps hanging from the sides. The hands are the biggest problem in 'bot mode: his wrists don't turn and he has a 'deathgrip' which tends to dent and scratch the hilt of the soft plastic katana when it is pushed with necessary force into his hands (the smaller knife can slide in from the top). The soft plastic (and the unpainted gunbarrel/hilt of the katana) is of course also a slight letdown.

As has been stated before, another 'Mech Alive' function is in the turret, which opens up with a sheath coming up and out while a wheel turns inside the turret halves. It looks interesting, but it does take up the entire turret, which has no further function in the transformation to robot except becoming a backpack. A Samurai flag flipping out would have been icing on the cake.
Luckily the smaller knife can fit entirely into the closed turret if pushed into the sheath well enough (in the box it is mounted in the side of tank mode, which just looks weird).
All in all, the bot mode works on several levels. First of all it's a good solid 'bot, well proportioned. More importantly, there's no doubt who this is: it SCREAMS Bludgeon. The green tank mode from the G1 Pretender's inner robot altmode and the orange skeletal samurai from the G1's shell. Although I've read quite a few ideas for repaints for this 'bot, I'd say very few consessions (if any) were made which would allow this Transformer to look like another character than Bludgeon.

Although there are some issues with the toy, the cons in no way outweigh the pro's of this excellent new mold. I highly recommend it.

I thought (and was hoping) the same thing too but according to Mkall, for the movie line, Takara just repackages the Hasbro versions. So what you see is probably what you get.
Re: Toy Review of ROTF Bludgeon (1011039)
Posted by Trikeboy on October 19th, 2009 @ 9:47am CDT

alldarker wrote:@Trikeboy: Peaugh has done a pictorial review of Voyager Bludgeon over on TFW2005 which also contains a picture of Bludgeon side by side with Classics Megatron. The way Bludgeon fits in with both the Classics / Universe line as well as the in the movie line is an intentional choice and has been officially stated by the designers, I believe.

Cyber Bishop wrote:I will be getting this fig when he hits the shelves.

I pray I can find this fig when it hits the shelves!

freaky777 wrote:Hi everyone, just for your info ROTF Bludgeon have been sighted in a couple of stores in my country, Singapore. So it seems that it is coming out real soon, however the packaging is lacking the side short knife in alt mode.. hmm anyway did not get it as I'm not sure if the knife is there.

The small knife is inside the tank turret..... Open up you will see it....
Re: Toy Review of ROTF Bludgeon (1013909)
Posted by fenrir72 on October 27th, 2009 @ 7:19am CDT
@ Devastattor IIRC the japanese version of ROTF Optimus has a slight difference in his smokestacks plastic. Hoping beyond hope maybe a slight difference in plastic shading?
Click here to view additional comments about this topic at the Energon Pub Forums ...