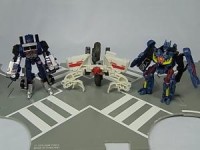 Recently, we have reported that there are 3 exclusive movie EZ Collection figures to be given away at various Japanese toy stores to commemorate the release of Takara Transformers Animated toys. You can check out the full gallery of the toys here.

heltskelt wrote:Hmmm... posing Soundwave as some sort of cannon isn't a bad idea at all.

no kidding he looks sweet.