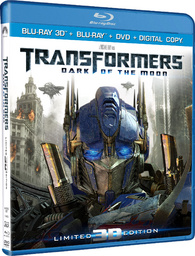 Blu-ray.com has posted a review of the upcoming Transformers: Dark of the Moon 3-D Blu-ray, which will be available along with the limited signature edition on January 31st. The full review can be viewed by clicking here, we've posted a few excerpts below.

Playback
Region A (B, C untested)


It took several months, but Paramount has finally re-released Transformers: Dark of the Moon as a full-fledged, feature-packed Blu-ray 3D presentation that's pretty much everything fans could have ever wanted. The film's previous Blu-ray release remains a standard for video and audio excellence, so the question is whether the 3D presentation can improve on perfection? The answer is, not surprisingly, "no," but the added 3D goodness certainly doesn't hurt the Dark of the Moon experience, either. Unlike some Blu-ray discs that see a slight, but noticeable, drop-off in general quality on the way to 3D, Dark of the Moon's general attributes remain as slick and eye-catching as ever. Fine detail is truly exemplary in this go-round, as it was before. Viewers will be endlessly impressed with the complexities evident on both live and digital elements. Human faces reveal nearly infinite textures. Building façades, heavily damaged debris, and most every element in the movie appears so intricately detailed that any scene rivals the finest the Blu-ray format currently offers. Clarity is stunning, too, which only aids in the transfer's ability to reveal incredible visual wonders. On the digital front, the various objects -- mostly Transformers -- take on so much visible complexity that one can only wonder how much painstaking work went into each creation, not to mention the horsepower required to display it all so pristinely for high definition home viewing. The scratches and dents of Optimus Prime and the rusty, worn, and battle-damaged exterior of Megatron are truly a sight to behold in every scene. Colors, likewise, are fantastic. The movie favors a warm appearance by nature, but it maintains that particular balance throughout. Each hue is incredibly vibrant, with Optimus' blue and red paint job particularly evident. Blacks remains strong, grain is retained where the movie was shot on film, and this is in every way the equal of the 2D release.

Transformers: Dark of the Moon offers some pretty amazing supplements, including an enthralling and honest Documentary that explores much of the filmmaking process.

Above and Beyond: Exploring Dark of the Moon (1080p, 1:50:46): This five-part documentary examines some of the more critical making-of elements surrounding the film. First is Rising from the Fallen: Development and Design (22:24), a surprisingly candid piece that features cast and crew discussing the faults of the second film and the filmmakers' search for redemption with part three. They speak on new robot design, character advancement, the absence of Megan Fox, and the addition of Rosie Huntington-Whiteley. Ready for Primetime: Filming Across America (27:50) explores the process of shooting in 3D, the picture's advanced stunt work and filmmaking processes, the challenges of shooting in various locales around the country, set design, stories from the set, a musical conflict between Shia and Michael, and more. Next is Battle in the Heartland: Shooting in Chicago (13:40), a detailed examination of the six-week shoot in the Illinois city. Discussions include the city's cooperation with the filmmakers, the scale of the scenes shot there, the natural challenges of the shoot, and Michael Bay's working dynamic. Attack of the Birdmen: Aerial Stunts (16:08) offers a detailed examination of the challenges of shooting the film's high-flying base jumping scene. Finally, Shadow of the Sentinel: Post-Production and Release (29:30) looks at the hectic challenges of the editing process and Bay's involvement therein, the massive computing power required to construct the film's highly-detailed special effects, the record-breaking sound effects, the film's Moscow premiere, Shia's personal growth through the films, the series' legacy, its future, and more.

Uncharted Territory: NASA's Future Then and Now (1080p, 26:15): As its title suggests, this piece examines the space program, providing an overview of its history, a look at the International Space Station, and the natural evolution of where the program may go.

The Dark of the Moon Archive (1080p): Another grouping of extras that branches out into five smaller pieces. First is 3D: A Transforming Visual Art (3:06), a brief conversation with Michael Bay and James Cameron about the value of 3D. Moscow World Premiere (2:29) takes viewers to Red Square and the green carpet for a glimpse into the film's massive premiere. Birdmen Featurette (2:28), another look at the high-flying stunt performers, covers much of the same material as previously seen in Attack of the Birdmen: Aerial Stunts. Next is Cody's iPad (2:07), a brief feature showing Michael Bay helping out one of his biggest fans. Finally, The Sound of 'Transformers: Dark of the Moon' (9:17) explores the picture's incredible and dynamic sound engineering.


The Matrix of Marketing (1080p): This collection offers viewers the opportunity to watch both the film's teaser (2:34) and theatrical (2:32) trailers and browse a collection of Transformers posters, style guides, promo items, and concession items.

At this point, it's safe to assume that there's none, or they're holding them back for a 3rd release.