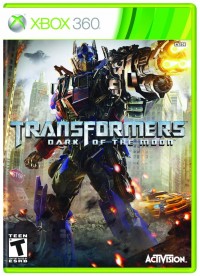 Santa Monica, CA - June 14, 2011 - The colossal battle between the AUTOBOTS™ and DECEPTICONS™ is underway as Activision Publishing, Inc.'s (Nasdaq: ATVI) new video game Transformers: Dark of the Moon ships to retail stores nationwide today. Created by acclaimed developer High Moon Studios and based on Hasbro's legendary TRANSFORMERS property, the game lets fans fight through epic battles as they unravel MEGATRON'S sinister plan and is set in the world of director Michael Bay's upcoming movie from Paramount Pictures that will be released in theaters on June 29th.

"The Transformers: Dark of the Moon game lets fans experience the gripping battles and original prologue story that precede the highly anticipated film," said David Oxford, Executive Vice President at Activision Publishing. "The team at High Moon Studios has created an amazing TRANSFORMERS narrative that unfolds through an epic single-player campaign and allows fans to play as their favorite characters in head-to-head multiplayer action."

"Activision has delivered a stellar prologue game leading up to the blockbuster movie," said Mark Blecher, SVP of Digital Media and Marketing, Hasbro. "Hasbro is looking forward to offering fans of the TRANSFORMERS brand and gamers alike an exciting video game to expand on the Transformers: Dark of the Moon experience this summer."

Featuring a new gameplay mechanic called Stealth Force, the Transformers: Dark of the Moon game lets fans instantly convert to a third, hybrid state that combines the weapons and firepower of Robot mode with the agility and maneuverability of Vehicle mode. Set in unique environments around the world such as the Jungles of Central America, Siberian military facilities, urban cityscapes and more, the game lets players assume the roles of a diverse roster of favorite TRANSFORMERS characters through a heart-pounding campaign to save mankind. Additionally, fans can play the game with or against their friends around the world through intense, online multiplayer game modes as their favorite iconic characters with the ability to personalize their characters' look with numerous appearance, weapons and skills customization options.

Additionally, Activision is releasing three separate games on the Nintendo platforms developed by Behaviour Interactive. Available on the Nintendo 3DS™ hand-held system and Wii™ system, Transformers: Dark of the Moon Stealth Force Edition follows a prologue storyline and harnesses the power of Stealth Force to focus gameplay on intense vehicular combat, allowing fans to obliterate enemies at blazing speeds with advanced weapons, defense systems and targeting capabilities as they slalom between cars and dodge fire in a highly maneuverable vehicle form.

All Nintendo platform games are rated "E10+" (Everyone 10 and older - for Fantasy Violence) by the ESRB.

About Hasbro
Hasbro, Inc. (NASDAQ: HAS) is a branded play company providing children and families around the world with a wide-range of immersive entertainment offerings based on the Company's world class brand portfolio. From toys and games, to television programming, motion pictures, video games and a comprehensive licensing program, Hasbro strives to delight its customers through the strategic leveraging of well-known and beloved brands such as TRANSFORMERS, LITTLEST PET SHOP, NERF, PLAYSKOOL, MY LITTLE PONY, G.I. JOE, MAGIC: THE GATHERING and MONOPOLY. The Hub, Hasbro's multi-platform joint venture with Discovery Communications (NASDAQ: DISCA, DISCB, DISCK) launched on October 10, 2010. The online home of The Hub is http://www.hubworld.com. The Hub logo and name are trademarks of Hub Television Networks, LLC. All rights reserved.

About TRANSFORMERS: DARK OF THE MOON
Shia LaBeouf returns as Sam Witwicky in Transformers: Dark of the Moon. When a mysterious event from Earth's past erupts into the present day it threatens to bring a war to Earth so big that the Transformers alone will not be able to save us. Starring Shia LaBeouf, Josh Duhamel, John Turturro, Tyrese Gibson, Rosie Huntington-Whiteley, Patrick Dempsey, Kevin Dunn, with John Malkovich and Frances McDormand. In cinemas worldwide from 29th June 2011 in 2D and 3D.

The Transformers: Dark of the Moon video game thrusts players directly into an original prologue storyline to experience the epic battles on Earth that will shape the events of the upcoming blockbuster film. Armed with a new gameplay mechanic called Stealth Force, fans will be able to instantly convert to a third, hybrid state that combines the weapons and firepower of Robot Mode with the agility and maneuverability of Vehicle Mode. Set in unique environments around the world such as the Jungles of Central America, Siberian military facilities, Urban Cityscapes and more, the game lets players assume the roles of a diverse roster of favorite TRANSFORMERS characters from the movie through a heart-pounding campaign to save mankind. Additionally, fans can play the game with or against their friends through intense, online multiplayer game modes as iconic characters.

You can order the game online from retailers such as ToysRUs.com by clicking on the links below.

Anyways...to the point of this. The game is completely a vehicle only game. You switch back and for between car and stealth mode (hence the name Stealth Force Edition). There is a story mode and a co-op mode. After you beat missions you can go back and play them in the mission mode. You get to play as 4 Autobots (Bumblebee, Optimus, Mirage, and Ironhide), 4 Decepticons (Lockdown, Crowbar, Megatron, and Soundwave). I've only played about 6 levels so far.

When you choose story mode, you practice first with Mirage (he has an Italian accent). Wheeljack is in the game but you only hear him talk (so far). He sounds like Perceptor from the G1 cartoon series. Then, on to the game. You start the real mission with Bumblebee. You cannot choose you character. Each character is chosen for what ever mission they're suited for. Also, there are no campaigns. As you play, the story switches back and forth from Autobot to Decepticon point of view. Other characters include Stratosphere from the ROTF toy line.

In most missions, you must race around and destroy enemies and collect Energon and Stealth points so you don't die or run out of missiles. These items generate quickly throughout the mission. The missions are small and some offer timed races where you have to collect items before time runs out. So far there is a desert mission and a Detroit city mission. It looks like there is a Siberian Snow mission (i haven't finished the game yet).

The voices of the characters are good. Peter Cullen does Prime of course. The music sounds like the music from the PS2 and Wii versions of ROTF.

Graphics aren't that good. The Sound effects aren't that good either, especially the sound the missiles make when you shoot them. The animated cinema scenes in between missions...well. They are drawings of the characters that don't really move, maybe an arm raises or a head turns. There is no CGI animation at all.

The game gets really repetitive and as far as i can tell so far, there are no unlockables or awards. I haven't played co-op yet, probably wait till my wife gets home from work to try that. Control is okay, except when you're in Stealth mode. You're slower and it's harder to turn around. You'll need a nunchuck with you Wii Remote.

Overall, not worth $49.99...wait for it to get to the discount bin or used section. I just don't understand why the Wii gets the crappy versions. Maybe i'll get a PS3 one day to get the better versions. If you like race car games or games like Twisted Metal, then you'll probably like this. On a positive note, the Wii version comes with a Stealth Force Mini-Bumblebee figurine. So, you can still have fun with the toy after you've given up on the game.

tattood-transformer wrote:I posted in the forum about this this morning, no one has them even though there were supposed to be delivered today. So I guess that answers my question now that the date has changed to this Thursday for release. Who is getting PS3 version?

I am, my PSN is the same as my user name on here.

EB Games / Gamestop usually calls when the games are in for people to pick them up. Mine didn't call last night so I figure I'd go in anyways because as far as I knew today was the release date. But the guy said they didn't even get them in which is why they didn't call. He said Friday, but I'm hoping Thursday at the latest.
Re: Transformers: Dark of the Moon Video Game Ships to Retailers Nationwide [Press Release] (1239907)
Posted by NatsumeRyu on June 14th, 2011 @ 11:49pm CDT
PS3.

At least 5 friends on my buddy list had it today.

I preordered from amazon and mine's due thursday. see you all online then.

edit: Nvm, you get him just for completing campaign, too.
Re: Transformers: Dark of the Moon Video Game Ships to Retailers Nationwide [Press Release] (1242079)
Posted by Galvatrondestroyer on June 18th, 2011 @ 8:50am CDT
Oh it's a pretty good game...I beat it in less than a few hours...got Shockwave and Ratchet for beating it. Though I must say, I'm not too keen on Shockwave. He's a great character to use...but he doesn't have a vehicle mode!