You may remember our nudge for Transformers to be inducted into the National Toys Hall of Fame, back in September. The time to do so is now over, as the Museum of Play has announced its 2016 inductees - and rejoice! we beat the mighty bubble wrap!

...we also lost to Dungeons & Dragons, the swing, and Fisher-Price's Little People. Check out the full press release below, and gather your toy robots ready for next year's edition. We still function.

About swing: Ancient cave drawings in Europe, carved figures from Crete, and ceramic vases from early Greece document instances of humans on swings. In the 1700s, artists of French nobility depicted swinging as an amusement of high-born adults. By the 19th century, industrial processes made ropes and metal chains cheaply and in abundance. And almost anyone with a tree could fashion a swing for children playing in the yards of growing towns and cities. The playground movement of the early 1900s put swings in public spaces for children of nearby apartment buildings and tenements. The parks and playgrounds gave youngsters healthy places to grow and socialize in cities that were becoming increasingly hostile to play. In the mid-20th century, many Americans put freestanding, family-sized swing sets on their own sunny suburban lots. After the 1970s, public concern for children’s safety urged parents to replace the tubular metal sets for smaller swings of woods and resins suited to children of different ages and development.

“Though the equipment has evolved with the centuries, the pleasure children and adults find in swinging has hardly changed at all,” says Curator Patricia Hogan. “Swinging requires physical exertion, muscle coordination, and a rudimentary instinct for, if not understanding of, kinetic energy, inertia, and gravity. It’s the perfect vehicle for outdoor play.”

About Dungeons & Dragons: In the 1970s, serious war game players Gary Gygax and Dave Arneson added the concept of role-playing to the strategy games that they enjoyed and helped launch the modern role-playing genre. With Dungeons & Dragons (published first in 1974), they created an entirely new way to play. Taking inspiration, other firms published similar games built upon related mechanics but often employing different fantasy settings, from historic battlefields to outer space.

In Dungeons & Dragons, players assume the roles of characters that inhabit a world moderated and narrated by a Dungeon Master, a player who explains the action to others and solicits their reactions to the unfolding story. The Dungeon Master’s storytelling skills and the players’ abilities to imagine add enjoyment to the game. Some aspects of the play are familiar, such as dice, but the special dice for Dungeons & Dragons hold up to 20 sides. Rolling them determines each character’s individual strengths, plots their complex interactions, and decides the outcome of their encounters.

“More than any other game, Dungeons & Dragons paved the way for older children and adults to experience imaginative play,” says Curator Nic Ricketts. “It was groundbreaking. And it opened the door for other kinds of table games that borrow many of its unique mechanics. But most importantly, Dungeons & Dragons’ mechanics lent themselves to computer applications, and it had a direct impact on hugely successful electronic games like World of Warcraft.”

About Fisher-Price Little People: Fisher-Price first offered its Little People in a 1959 Safety School Bus pull toy. These stylized figures populated a variety of play sets that encouraged youngsters to explore the world beyond their homes and to imagine themselves at school or the airport, at the service station or the amusement park, and at the zoo or a faraway farm. Fisher-Price made the first Little People of wood and lithographed paper; solid, single-colored wooden bodies followed. Later figures were made of hard plastic. In the 1980s, concerns about the small figures becoming a choking hazard led to the 1991 introduction of a new design for larger diameter Little People known as “Chunky People” or “Chunkies.” By the mid-1990s, the Little People became more people-like with arms, legs, and dimensional faces.

Says Chris Bensch, The Strong’s vice president for collections, “Little People have been a fixture—albeit a small one—in many American playrooms for more than 50 years. More than two billion Little People have been sold since 1959, and they have helped generations of small children imagine big adventures in play sets representing farms, schools, airports, and other fascinating places in their worlds.”

About the National Toy Hall of Fame

The National Toy Hall of Fame® at , established in 1998, recognizes toys that have inspired creative play and enjoyed popularity over a sustained period. Each year, the prestigious hall inducts new honorees and showcases both new and historic versions of classic toys beloved by generations. Anyone can nominate a toy to the National Toy Hall of Fame. Final selections are made on the advice of historians, educators, and other individuals who exemplify learning, creativity, and discovery through their lives and careers. Toys are celebrated year-round in a state-of-the-art exhibit at The Strong museum in Rochester, New York. For more information about the hall and to see the list of previous inductees, visit toyhalloffame.org

MrBlack wrote:It's hard to be upset when you lose to the swing.

Why had that not been inducted already?

It's kinda crazy how long it takes some things to be inducted. I mean it took 11 years for them to induct the ball (2008).

And yes, this is more of a "plaything hall of fame", this is put on by the Strong National Museum of Play after all, toy just sounds better.

Transformers had over 12% of the Popular Vote. It must have lost in the Electoral College.

Re: Transformers Not Inducted to 2016 National Toys Hall of Fame, Beaten by D&D, Little People, Swing (1910598)
Posted by Va'al on September 13th, 2017 @ 5:49am CDT
You may remember how Transformers in 2016 was not admitted to the National Toy Hall of Fame, losing to the swing, D&D and Little People (see story here) - but the brand is actually back in the running for 2017, along with other 11 finalists such as Clue, the Magic 8 Ball, Matchbox Cars, My Little Pony, the paper airplane, Sand, and more. Check out all the finalists here: http://www.toyhalloffame.org/2017-finalists.

The following 12 toys are finalists for 2017 induction into The Strong’s National Toy Hall of Fame. Only two or three will take their honored places in the hall this year when they are announced at a ceremony at The Strong on Thursday, November 9, at 10:30 a.m. 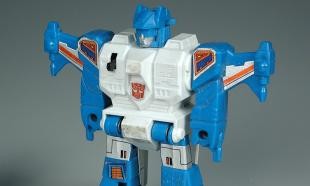 Hasbro, Inc. introduced Transformers, a toy line of action figures that change their shapes, in the mid-1980s. They marketed Transformers with an elaborate back story supported by a Marvel comic book series, a cartoon television series, animated movies, electronic games, consumer goods, and even its own cereal. A continuing series of blockbuster films (with the latest installment released in June 2017) has kept Transformers in the public eye.

Black Bumblebee wrote:We're up against the likes of sand and My Little Pony.

Who makes these lists? lol

You know, I wouldn't mind too much if we lost to MLP.

If Transformers loses to sand this year, there must be a lot of voters that love going to the beach...
Re: Transformers Not Inducted to 2016 National Toys Hall of Fame, Beaten by D&D, Little People, Swing (1910692)
Posted by Sunburnninja on September 13th, 2017 @ 12:50pm CDT
Last time I checked sand was a messy natural resource, not a toy, but whatever


Re: Transformers Not Inducted to 2016 National Toys Hall of Fame, Beaten by D&D, Little People, Swing (1910994)
Posted by Bronzewolf on September 14th, 2017 @ 6:08pm CDT
This just in: Next year's list of nominations has been leaked. It will include Rainbow Brite, dirt, a puddle, Zoids, a stick and a hoop, just a stick, just a hoop, your parent's shoes you'd try on when you were little, mud, a piece of blank printer paper, a gentle breeze, aaaaand Transformers. Again.

o.supreme wrote:Fans Unite! Don't throw your vote away. Vote for Transformers! Don't vote for SAND because...

God if we lose to frickin' sand.
Click here to view additional comments about this topic at the Energon Pub Forums ...