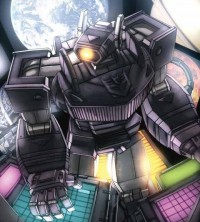 Thanks to seibertron.com member Symbiote Spiderman14 we now know that the anticipated game Transformers:War for Cybertron is going to include everybody's favourite emotionless Decepticon, old "one eye" Shockwave himself.

Shockwave will be only playable in online multiplayer mode and will be a GameStop pre-order exclusive.
Just click here to visit GameStop's pre-order page.

Reserve Transformers: War for Cybertron and gain access to the GameStop Exclusive multiplayer character SHOCKWAVE. Serving as the Decepticon’s military operations commander, SHOCKWAVE is 2nd in power only to MEGATRON, and is playable only in Escalation mode in Multiplayer mode. Available online and in-store while supplies last.

As of yet it is unknown how or if non US players will be able to get Shockwave but stay tuned to seibertron.com as we keep you updated!

WarzoneBeta wrote:Is it just for the 360 or is it for all the systems?

I'm curious about this too, as I'd probably be getting the Wii version of this seeing as I have no 360 and have no intention of buying one in the near future.
Re: Transformers: War for Cybertron Shockwave Playable (1044575)
Posted by Dead Metal on February 6th, 2010 @ 11:36am CST