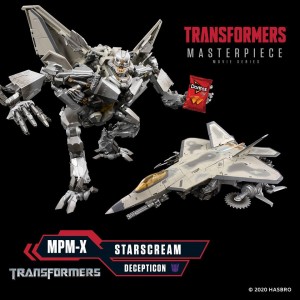 Grab your Doritos and diet double dew, because it's definitely due time for a discussion date doting on daft new Transformers with the Seibertron.com Twincast / Podcast. Join Cobotron, Megatronus, Rotorstorm and ScottyP for another round of weekly quarantine listening that dives into yet more Seacons, the latest Movie Masterpiece reveal and even some extremely irresponsible speculation about unknown toy listings.

Episode #247 “Fish 'N Chips” is available directly and in our RSS Feed, and should appear on Apple Podcasts, Google Play, and Stitcher Radio within 24 to 48 hours of when you see this news post.

Stay tuned next week as we bring you another episode that starts our trail into Cyberverse season 3 while tackling some of your burning listener questions!

I used to, and still sometimes still want to, be the first to own something, just for the fun of people hearing my thoughts first to judge a figure. I try not to think about it too much though, getting things first and quickly sometimes takes the fun out of it.

Not sure how I feel about Target getting MPM-10 as the exclusive. Pre-order system isn't overly reliable, but it would be so awesome to see him in stores and use my Target card for him.

I really think Target has stepped up, I feel like I have seen so much more at Target in the past 2 years and growing, with bigger and more well stocked toys stuff.

That shoulder and chest articulation is really impressive, he can bust some moves!

I truly think later this year we will get Ratchet, and next year will be Blackout and Sideswipe. Bonecrusher and Brawl will hopefully be not too far behind.

Ari: no, continue MPM and BW. if anything, quit G1.

Cobs: the first Starscream was spring 2018, the tattooed on fall of 2018. Both came out in that first year of figures. I got tattooed Starscream, that is a joyful toy, and I'm super happy the new MPM is also bringing the saw, minigun, and missiles.

Still waiting on the final 2 Seacons to ship, come on TFsource

I've not idea what these "red" generations toys are supposed to be, I'm just gonna wait and see.

D-Maximal_Primal wrote:Ari: no, continue MPM and BW. if anything, quit G1.