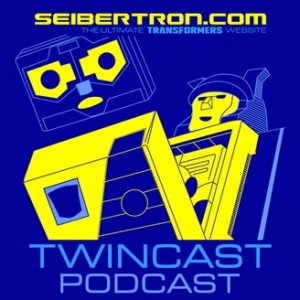 With Seibertron's coverage of San Diego Comic Con 2016 winding down, the Twincast Podcast crew is set to get wound up in a matter of hours. Join us live on the Seibertron Youtube Channel at 9 PM Eastern Time as we digest all the awesome Hasbro Titans Return and Robots in Disguise product reveals, revelations from IDW Publishing's Transformers comics, and Machinima's Combiner Wars series airing this August on Go90.

Watch on the channel itself, or check out the embed below which will also go live at 9 PM Eastern Time.


Before the show gets going, ask us questions on Twitter by using the hashtag #AskTheTwincast. We'll take some of the best and answer them live, for better or worse! You can also leave a question for tonight's show here in this thread by replying to this news post.

I don't know if my YouTube comment was scene by any of you, but that smell that comes from old figures is from the plasticizer leaking fumes out of the old plastic. Plasticizer is an additive that keeps the plastic from being brittle. I've long theorized that a reaction between the plasticizer and the chemicals used in gold plastic is what causes GPS over time.

Also I think they can easily reuse the Titan Masters to give them proper bodies without altering the faces. For example they can give Grimlock a blue visor or make Flywheels a proper shade of dark brown.

Worked out ok in the end!

If we do this again, I've figured out how to actually enable the picture showcase and live Q&A. Google's process for enabling those is really dumb, so we weren't able to use those like we'd hoped.

I'm glad everyone that tuned in enjoyed! For anyone that missed it, it's up on the Youtube channel, and we'll have the "Traditional" audio only version up sometime later this week.