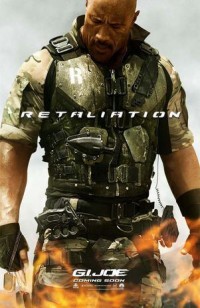 This isn't Transformers news, but considering the long standing connection between the two fandoms we decided to put this on the homepage. This Summer's highly anticipated G.I.Joe: Retaliation has been delayed until 2013! Despite being a mere five weeks away from the film's release date, the millions already spent promoting the film, and the toys already showing up on retail shelves, Paramount has pushed the release date back until March 29th of next year. The main reason for the delay appears to be a decision to post convert the film to 3D.

In an interview Monday with The Times, the 32-year-old director expressed excitement about the impending release date and a new trailer, and sounded like a filmmaker who felt he had already cleared the toughest hurdles of post-production.

"It's been a crazy journey but we're almost there," he said. "I'm excited for people to finally see it or even finally get a glimpse. I'm really excited about it."

The full L.A. Times article can be read by clicking here.

See the official press release below:

Janus Prime wrote:3D... sure... this has got nothing to do with The Avengers...

worldsgreatest wrote:As bad as it is sometimes for Transformers fans, count yourselves lucky that you aren't a GI Joe fan. And if you are...I'm sorry.

I never even SAW a Low Light or Renegades Storm Shadow at retail. And now...this.

I know the feeling, I just got into G.I. Joe with the PoC line and it wasn't long before they dropped the ball on that. It seems the more I wanted a figure the harder it was to get.


freetouch wrote:10 to one execs got freaked out because battleship sunk like the titanic.

That's what I'm thinking.
Re: Paramount Delays G.I.Joe: Retaliation Until March 2013 (1383072)
Posted by necr0blivion on May 24th, 2012 @ 12:16am CDT
That's a shame, especially so close to the expected release. That first movie was not good, but I think most people had an expectation that the sequel would do better. I was looking forward to it for the following reasons:
-The Rock as Roadblock
-Bruce Willis as Joe
-Cobra Commander looking more like Cobra Commander
-lots of ninja action

Reasons that wouldn't make a difference to me: seeing the movie in 3D.

I agree, the 3D reason sounds like a cover, but I wouldn't compare Battleship's recent outing to possible Joe revenue. Joe has a devout following, Battleship is just a game.

I, too, feel empathy for Joe fans. At least I have Expendables 2 to look forward to this summer as centerpiece of another testosterone night.
Re: Paramount Delays G.I.Joe: Retaliation Until March 2013 (1383076)
Posted by 5150 Cruiser on May 24th, 2012 @ 12:45am CDT
Oh wow... Just wow. I can only imagine what the Joe fans are going through. espeacialy since this movie looked alot better than the first.

I wonder if people put up enough fuss that they'll reverse there decesion and keep the movie on track for its June release date. Worth a shot
Re: Paramount Delays G.I.Joe: Retaliation Until March 2013 (1383077)
Posted by dinojack86 on May 24th, 2012 @ 12:50am CDT
Wow- I am stunned. I don't know why- I think it's because of how close to the release date they are. The previews, the interviews, the toys (my TRU has already begun stocking them!) and so on. I'm actually pretty stoked for this movie, possibly more than any other this summer. I say I'm disappointed is an understatement. I think it has great potential (especially compared to the first movie) and this in my opinion is a HUGE mistake. Paramount already delayed Star Trek 2 over and over again- probably for 3D. I just don't get it. GI JOE was my first love as far as toys and cartoons are concerned when I was very young. It probably played some part down the line in my decision to join the US Army myself. I just really think they're shooting themselves in the foot whether they realize it or not. Excitement for this film isn't going to last over the next 9 months- this isn't the Avengers! If toy sales were bad before this isn't going to help. I think Hasbro and Paramount jacked it all up when they decided to make them an international team rather than Real American Heroes. That's what GI JOE is and was always supposed to be. It just goes to show what the power of patriotism and pride in our great nation can instill in children. I've been checking out Generaljoes and I must say the mood is sour to say the least. Don't mean for negativity but I always hate to see something like GI JOE get kicked while it's down. I just honestly feel like they may have just written the death sentence for the GI JOE toys/brand for a while.
Re: Paramount Delays G.I.Joe: Retaliation Until March 2013 (1383091)
Posted by Screamfleet on May 24th, 2012 @ 1:34am CDT

freetouch wrote:10 to one execs got freaked out because battleship sunk like the titanic.

it really kind of is actually.

GI Joe was setting itself up for failure.

Avengers in it's 3rd weekend did better than battleship on it's first.

GI Joe would have had spider-man coming out the next week.

Audiences have pretty much shown, that right now, they like super heroes. This will probably really help GI joe out. Rather than completely disappearing in it's second week.
Re: Paramount Delays G.I.Joe: Retaliation Until March 2013 (1383097)
Posted by noctorro on May 24th, 2012 @ 2:21am CDT
3d only in post production? Wasn't that like a bad move (Clash of the Titans)

Didn't know Battleship did bad at the boxoffice, I find it the better one of the random alien movies (Skyline / World Invasion).

I don't mind it being delayed, even if it was released around the same time as Spiderman. I live almost next to a cinema so I'm going to All the movies anyway.

March is a bad time for movies, and The Hunger Games is proof of that. (Follow me...)

The Hunger Games is supposedly an excellent movie (I've not seen it, no real interest...), but some have said that while it is a great film, it might not have made it as a summer blockbuster kinda deal. It made beau coup bucks, by being released in March. But, it's the exception, not the rule. Even the analysts were shocked by it's success. Especially when factoring in the release date.

It takes something exceptional to make a March release date be a winner. I don't see Retaliation being that exceptional piece of cinema. Plus, post converting it to 3D will only give people MORE to bitch about it.

This is a horrible, horrible idea, and it's going to cause the film to suffer. And like it was said, it shows that the film isn't really that strong on it's own.
Re: Paramount Delays G.I.Joe: Retaliation Until March 2013 (1383117)
Posted by fenrir72 on May 24th, 2012 @ 5:34am CDT
Epic FAIL! This should be rebooted from the beginning and stay true to its roots.

1.Snake Eyes and Stormshadow........brothers in arms not this fake jealousy/rivalry schtck they rammed into our throats.

2.The Baroness should be ultra left uber rich revolutionary not some mind wiped blond bimbo

3.G.I.Joe should be the Real American Hero

4.Cobra Commander? Well the origin either be the Cobra-La or Larry Hama's (both are equally good)

Otherwise, this will sink faster than "Battle Shit........Ship" in a clunker fest contest between it and John Carter.
Re: Paramount Delays G.I.Joe: Retaliation Until March 2013 (1383119)
Posted by Sodan-1 on May 24th, 2012 @ 5:58am CDT
I'm sorry I don't mean to tempt an off-topic argument, and I know I'll bring down the wrath of the thread upon my head. I read the little disclaimer at the start of this news article but why has this been news'd? I'm not saying Seibertron was wrong to say so, but he has been quite adamant that this is a site for the Transformers brand. This clearly doesn't count and is quite hypocritical of Seibertron (the site and the person if he had a say in the decision to news this).
Re: Paramount Delays G.I.Joe: Retaliation Until March 2013 (1383120)
Posted by worldsgreatest on May 24th, 2012 @ 6:06am CDT
More than delaying the movie, this has ensured that Joe fans will get crappy movie figures for TWO YEARS instead of the awesome infuriatingly hard to get figures that were coming out. Two years!

Two years of awful Rock and Bruce Willis repaints! The horror. The horror.
Re: Paramount Delays G.I.Joe: Retaliation Until March 2013 (1383136)
Posted by vectorA3 on May 24th, 2012 @ 6:43am CDT
Post conversion 3D sucks. Hasbro/paramount should've been shooting it in 3D all along with their billions from Transformers. Instead we get this BS. Battleship actually made $, with combined domestic & international gross, just not as much as the greedy execs wanted. It's their fault for taking the gamble and spending $220+ mill on a first time movie based on a board game. Wth were they thinkin?

The only bright spot for Joe fans is that Hasbro will have more time to make the figures & fix things if needed.
Click here to view additional comments about this topic at the Energon Pub Forums ...