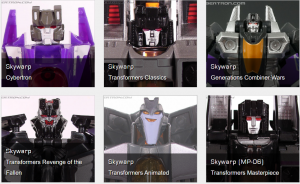 Every month now, Seibertron.com brings you a Top 5 list related to all things Transformers written by me, your fellow editor. These are my opinions (just like movie or game reviews hosted by sites are still just the opinion of one person) so what matters most is what you guys think of the topic or list, and I hope to see your own lists or comments on omissions and ranking. Let's have fun! All previous lists can be found here.


Sure sure, Skywarp has teleportation abilities, but we all know what really makes him stand out from the rest: his awesome deco. Purple is the thematic colour of the Decepticons (looking at the logo) and it highlighting a black jet is just gorgeous. So while it's not usually the case, deco will have a bigger impact on some choices in this list, especially since time and time again Hasbro finds ways to really mess up his deco (like the Classics deluxe and Combiner Wars leader).

This is the one that started it all with that beautiful deco. It just looks so good. The mold itself is one most fans are familiar with. You are either on board or you're not. And while I have always been lukewarm about it, that jet mode is awesome and looks great in those colours. 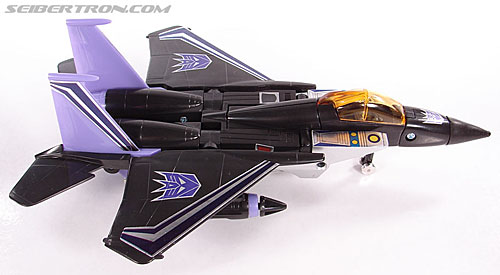 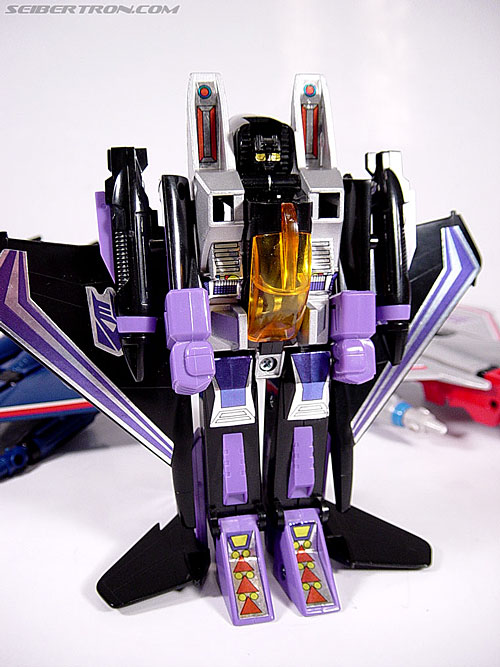 While not his usual all black self, this isn't Skywarp's usual G1 self. It was a completely new Seeker body and while it's during the era where Hasbro cheaped out on deco and plastic, making the other seekers who use this mode rather lackluster, it works pretty well for Skywarp. The purple highlights really pop against the grey, almost like they do in the game this toy is based on. And plus Skywarp held this body in the comics too, so you get a deluxe IDW Skywarp, two birds with one stone and all that. The mold overall is rather quaint but Skywarp makes it work best, especially thanks to the deco which plays a special role in concealing the head which is left out in the open in alt mode, which is one of my big gripes with this mold. 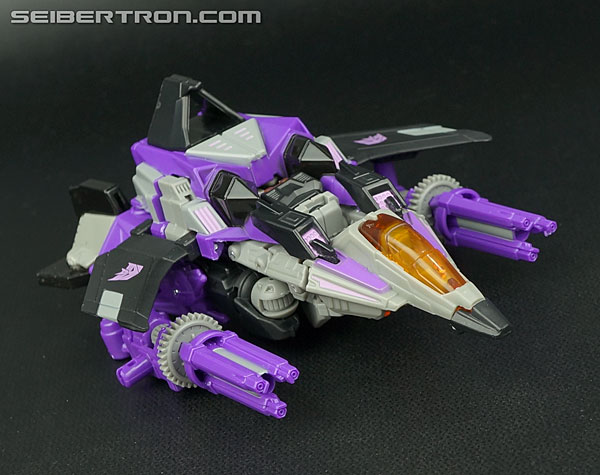 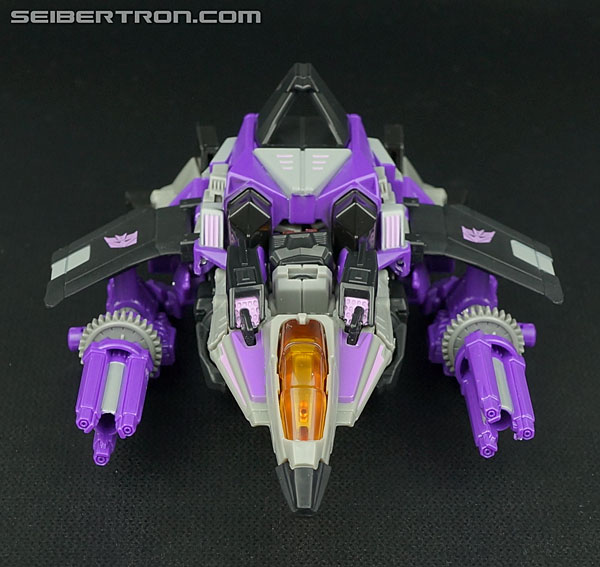 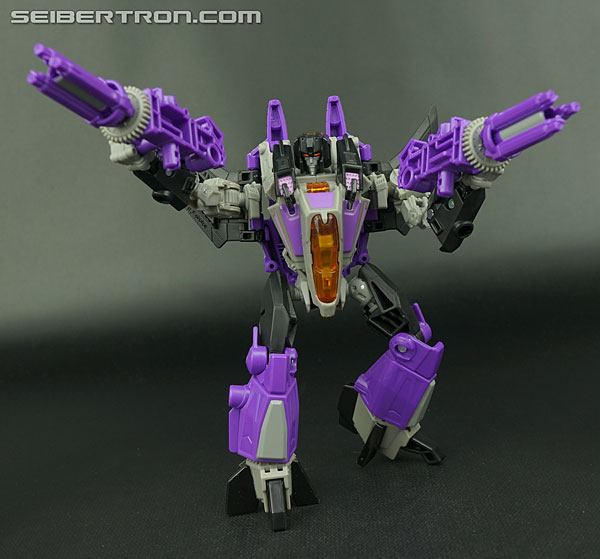 The MP mold rarely makes these top 5 seeker lists since it was already dated by the time it came out and the dumb exclusivity simply added costs to an already overpriced toy (plus, this is the only MP-11 seeker never to be released in the west). BUT the MP is a rare instance where they get the show deco right. The cartoon actually added some extra purple that was not on the original G1 toy, like the shoulders, and until 2020 this MP was the only toy to really get the right colour pattern for our dear old Skywarp. In contrast, there's the Combiner Wars leader Skywarp which just gets it wrong. It gives him a purple chest, completely ruining the illusion of his chest being a warped version of his alt mode's nosecone. Granted, robot mode chest on the MP mold was always wonk looking but at least the colour's right. And the MP jet mode is just amazing looking. It was always the better mode, same with the G1 toy, and the colours just rock. 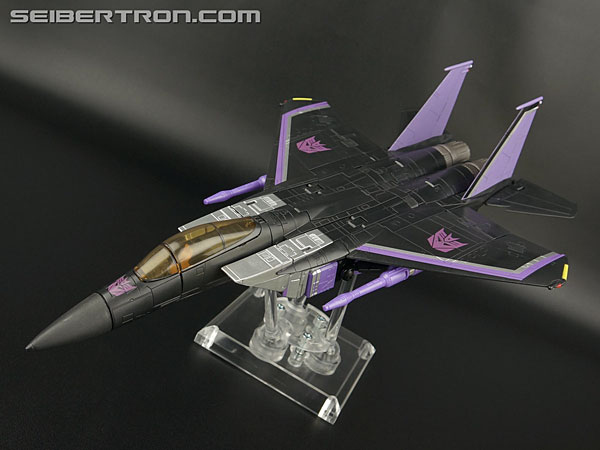 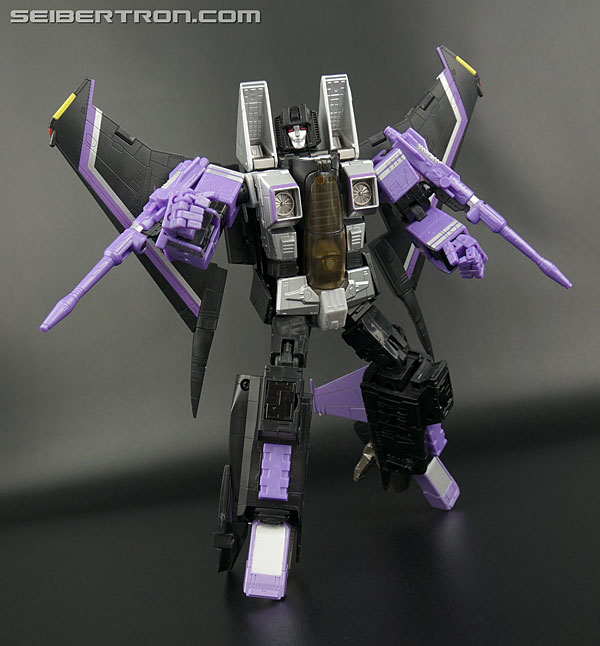 Hasbro went all out on Armada Skywarp and I really want to highlight that. They gave him a new headsculpt, new cockpit laser cannons, new wing turbines and a new Mini-Con partner. And while Armada Strarscream's deco strayed very far from his G1 self, Skywarp was a beautiful blend of the G1 black and purple but applied to his new Armada look. I know there are big fans of that mold out there and this is the best rendition of the mold bar none. 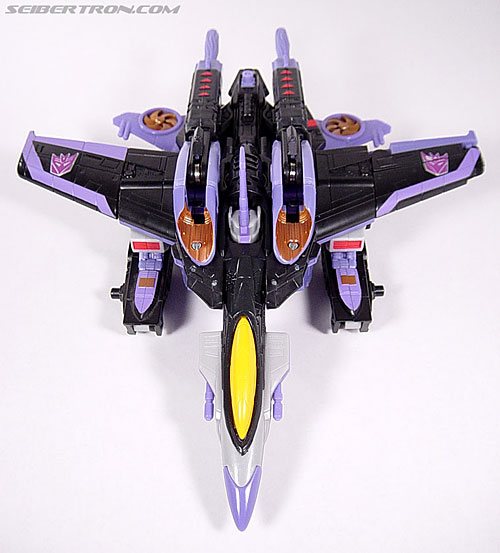 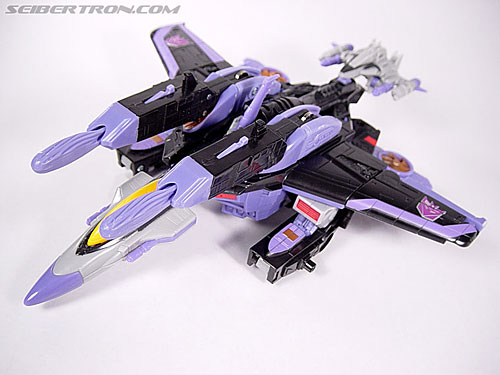 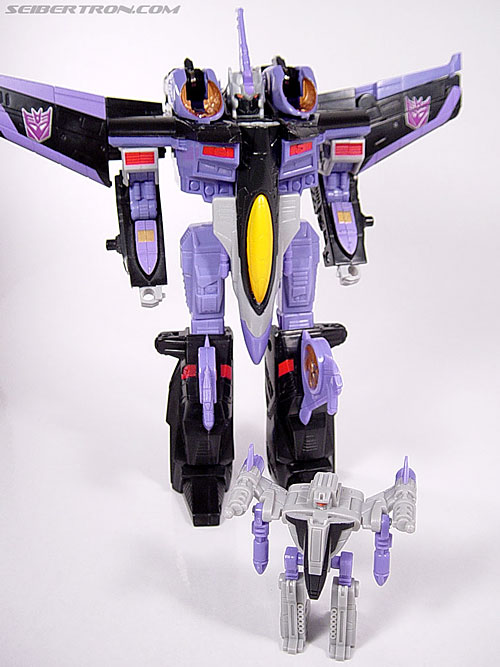 Everyone likes the Classics seeker mold but there was definite room for improvement (height for one) with Skywarp being most in need of a redo due to the odd bright prune colour choice by Hasbro (and odd paint quality by Takara). But Earthrise came through for us with a loyal deco to the G1 cartoon on an excellent mold. I know I was weary since Hasbro's deco choice for Siege Skywarp was God awful but seeing those perfect colours of Earthrise Skywarp in hand almost made me forgive the odd choice for a screaming headsculpt. Plus, unlike the MP, the cockpit chest is tapered in the right direction (down). This is my definitive Skywarp. 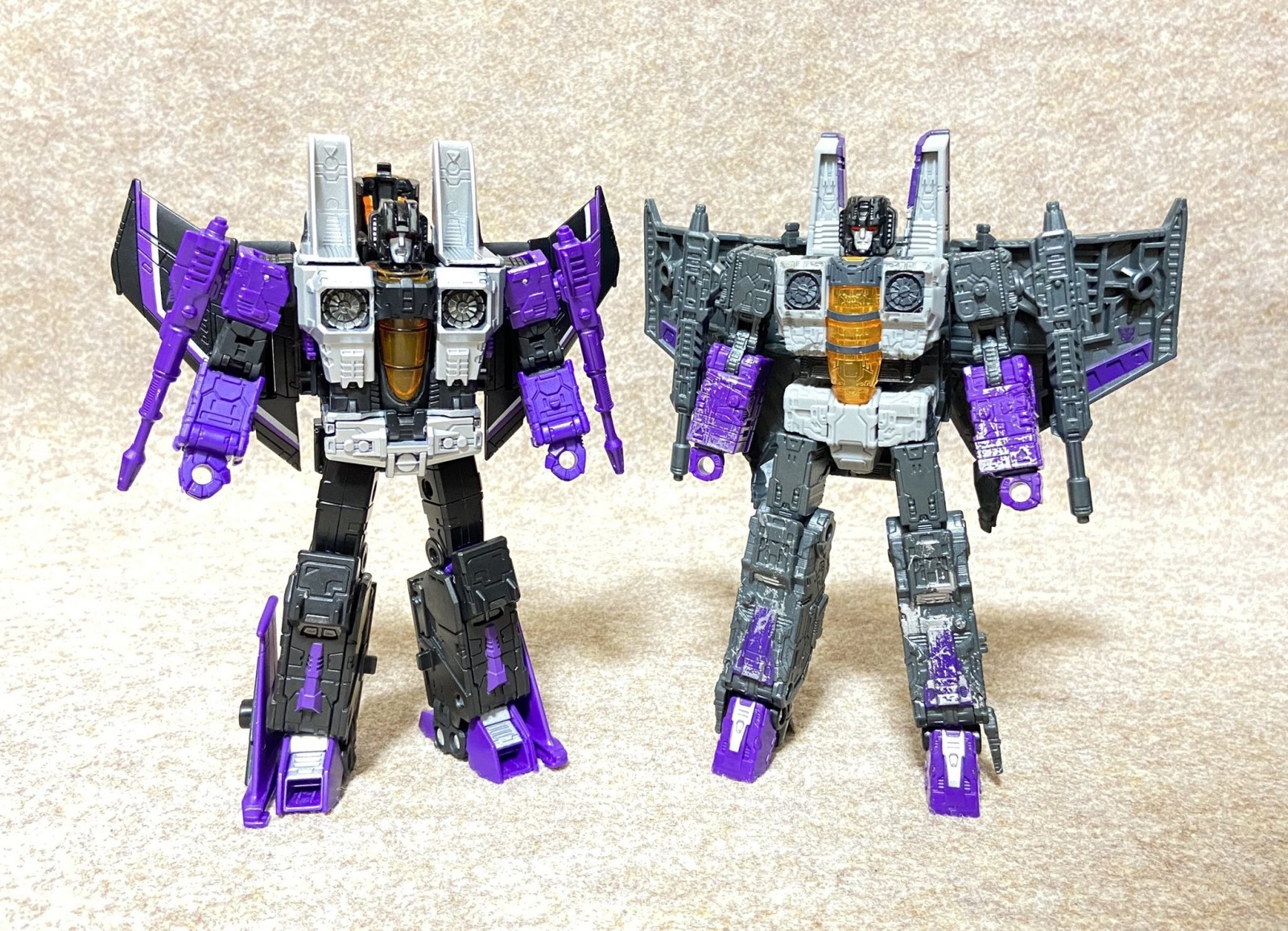 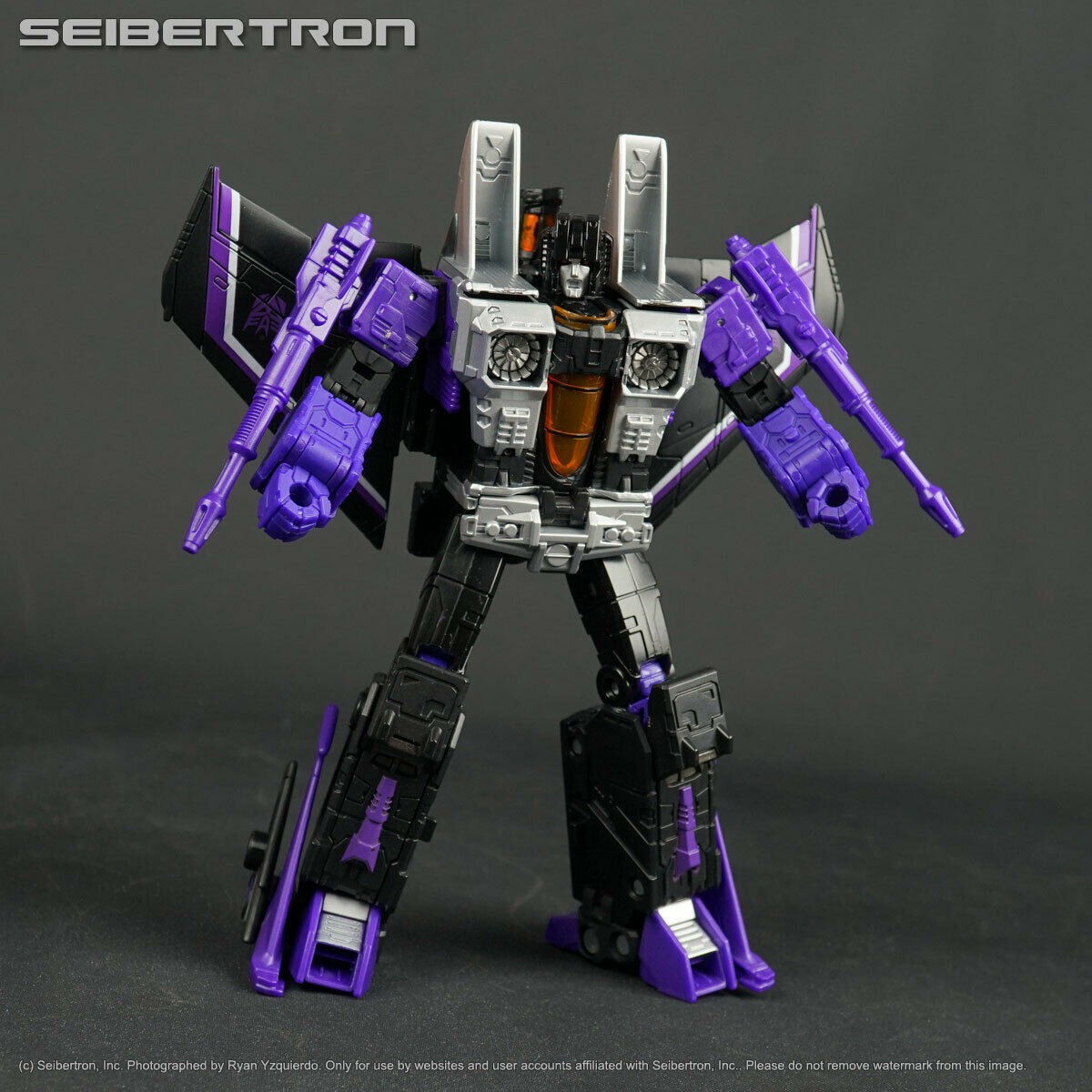 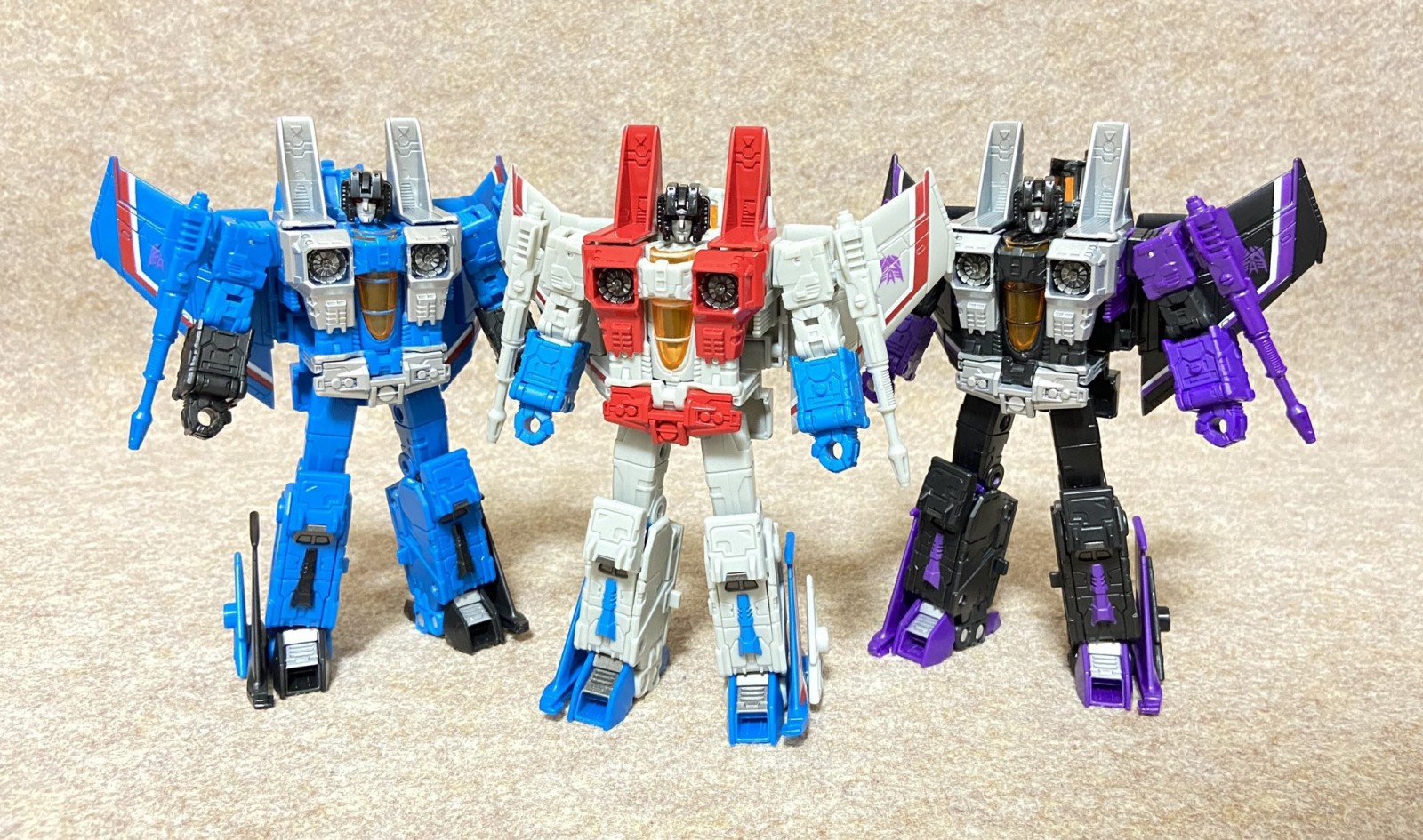 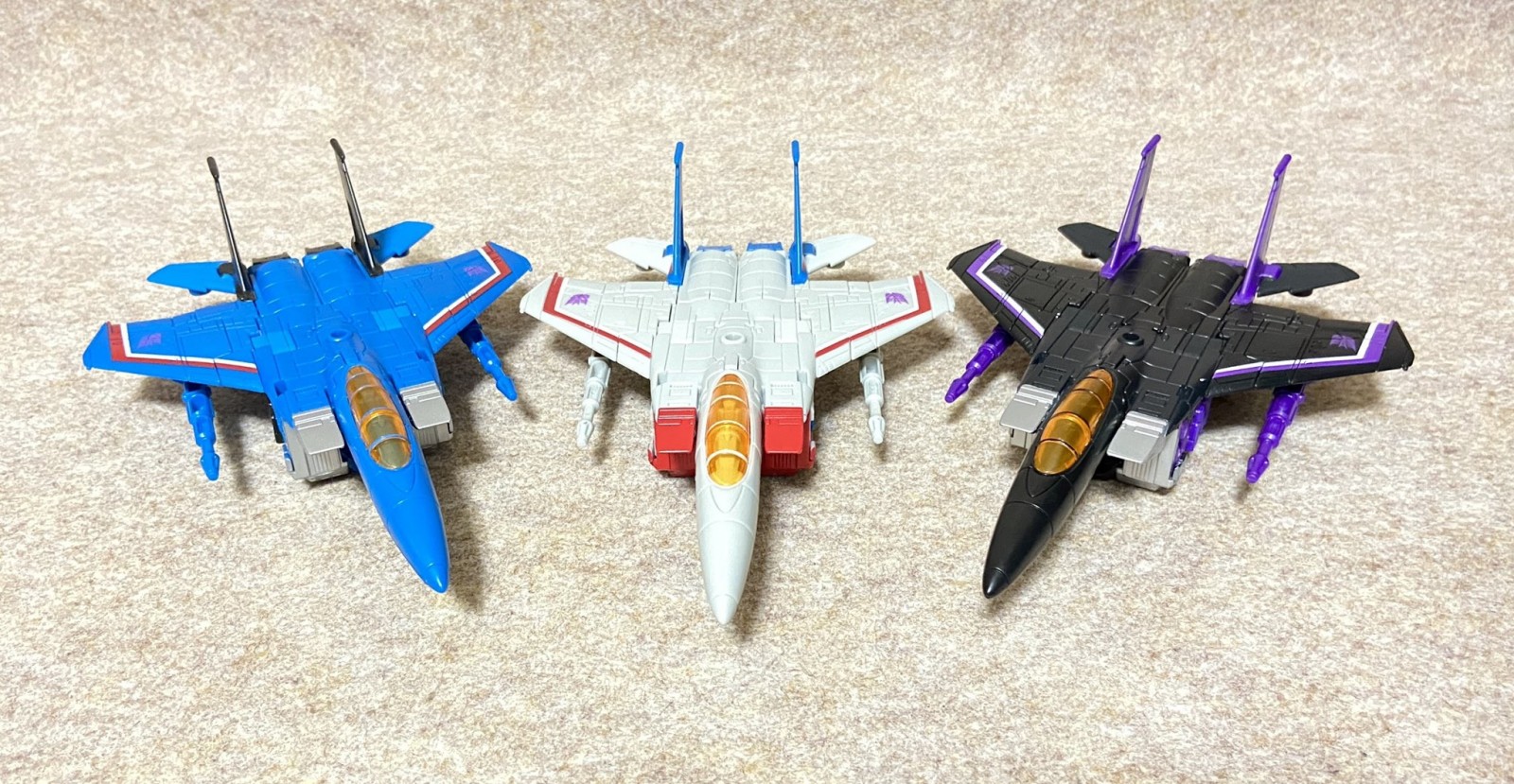 Honourable Mention: I just wanted to note the really nice job the now defunct Transformers Club did for their homage to Armada Skywarp using the Generations Armada deluxe Starscream mold. 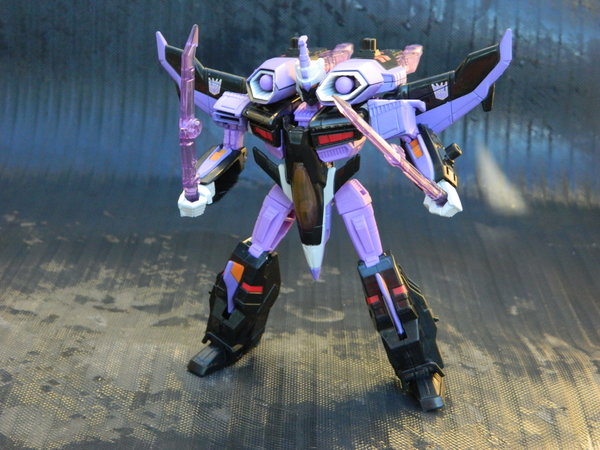 Posted 5 days ago
News Categories: Toy News, Movie Related News, Cartoon News, Comic Book News, Site News, Rumors, Event News, Digital Media News, Collectables, Sponsor News, Game News, Site Articles, Store News, Company News, People News, Press Releases, Sightings, Reviews, Unlicensed Products News, Auctions, Transtopia, Interviews, Knock Offs, Collector's Club News, Editorials, Heavy Metal War, Podcast, Contests, Book News, Top Lists
Click here to post your comment about this news story!
Re: Top 5 Best Skywarp Transformers Toys so Far (2103653)
Posted by Quantum Surge on May 3rd, 2021 @ 10:21pm CDT
I love the Siege and Earthrise versions of Skywarp so much.
Re: Top 5 Best Skywarp Transformers Toys so Far (2103654)
Posted by Bioformer Grr on May 3rd, 2021 @ 10:32pm CDT
Good choices. Fall of Cybertron Skywarp is probably my favorite. He and Generations Cosmos were the first transformers I got when I first started my current collection.
Re: Top 5 Best Skywarp Transformers Toys so Far (2103659)
Posted by Nemesis Reformatted on May 4th, 2021 @ 12:20am CDT
Wow! Siege Skywarp looks worse & worse every time I see it. As soon as I got mine I repainted it into the correct colors. I cannot tolerate it when Hasbro constantly gets his colors wrong. Skywarp was my very first Transformer in 84 so it really rubs me the wrong way then they keep messing up his colors. Skywarp isn't gray & cranberry. Skywarp is black & violet.

All the toys on this list are in the correct colors except for Siege & Earthrise. Siege is totally wrong & the purple on Earthrise is way too dark.
Re: Top 5 Best Skywarp Transformers Toys so Far (2103661)
Posted by noctorro on May 4th, 2021 @ 1:24am CDT
I Agree with Nemesis Reformatted, violet looks way better on him.

To the Moderators, or admins, or tribe leaders of this forum: Make a top 5 Transformers Game list (if you not already have that)

I was always a bit displeased with Armada Skywarp having a different head, I even tried to get that head out, impossibru! I did do a mod on the Armada mold, I swapped the shoulders left>right so that the arms can reach way more upwards. It's a simple modification and the transformation still works.

Shout out to the game Fall of Cybertron, High Moon made the best Transformers games. Too bad the studio went and died because of Deadpool and some other stuff. RIP High Moon, you knew Transformers.
Re: Top 5 Best Skywarp Transformers Toys so Far (2103662)
Posted by william-james88 on May 4th, 2021 @ 1:32am CDT

Nemesis Reformatted wrote:All the toys on this list are in the correct colors except for Siege & Earthrise. Siege is totally wrong & the purple on Earthrise is way too dark.

Just to be clear, Siege Skywarp is not on this list, he is on the picture to show how much hasbro messed up in comparison. Also, I don't think the purple is too dark on Earthrise. It is darker than G1, but I still think it looks good.

noctorro wrote:To the Moderators, or admins, or tribe leaders of this forum: Make a top 5 Transformers Game list (if you not already have that)

Here you go: https://www.seibertron.com/transformers ... ase/33962/
Re: Top 5 Best Skywarp Transformers Toys so Far (2103668)
Posted by -Kanrabat- on May 4th, 2021 @ 5:14am CDT
Gotta say that even if I already have Armada Starscream, that Armada Skywarp is worth getting for his unique head sculpt alone, making him his own unique character.

BTW, I have a list in preparation and I think I'll be able to publish it this Saturday if this doesn't conflict with anyone's schedule.
Re: Top 5 Best Skywarp Transformers Toys so Far (2103673)
Posted by Emerje on May 4th, 2021 @ 6:17am CDT
Great list! No complaints here, happy to see the Armada figure get so much love, it's one of my favorite molds. And the extra nod to the Fun Pub figure is a nice touch. 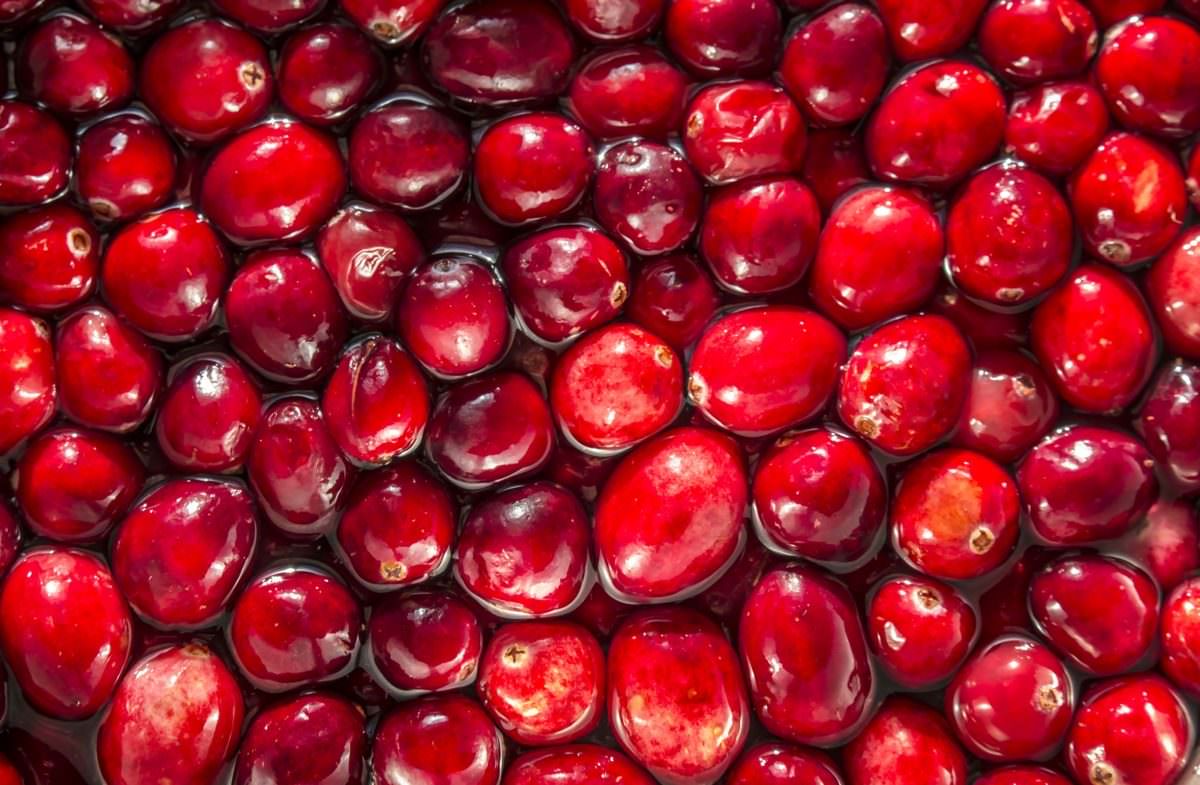 You're correct, there are no cranberry red Skywarps.

For my own part, honourable mention to one I actually own: 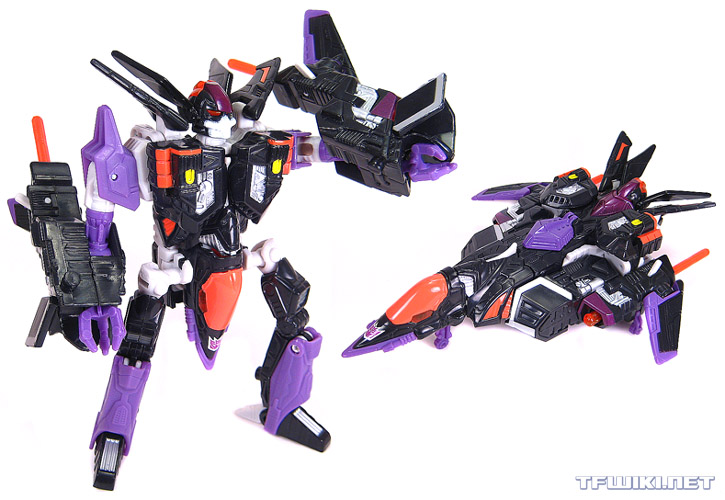 You will have to update it when they release Masterpiece Armada Skywarp.

noctorro wrote:To the Moderators, or admins, or tribe leaders of this forum: Make a top 5 Transformers Game list (if you not already have that)

Thanks! Some reading material before work

Re: Top 5 Best Skywarp Transformers Toys so Far (2103725)
Posted by blackeyedprime on May 4th, 2021 @ 1:15pm CDT
MP Skywarp wins it for me probably followed by amarda (even his minicon was neat), animated, beastmachines redeco, then G1.

I think Henkai did the colors better over Earthrise especially with the lack of purple on the shins even if Henkais shoulders arent accurate.
Re: Top 5 Best Skywarp Transformers Toys so Far (2103733)
Posted by Overcracker on May 4th, 2021 @ 2:59pm CDT
Universe Skywarp from Jetstorm was awesome sad he did not make the list.

Outside of that, Earthrise is excellent and the purple is the same tone as used for classics which I like. Though yes, not the lilac / lavender that was used for G1.
Re: Top 5 Best Skywarp Transformers Toys so Far (2103757)
Posted by X3ROhour on May 4th, 2021 @ 11:22pm CDT
IMHO
U made a great list, as usual.
But...
A lot of people tend to forget about one version of Warper that I truly love:
Robots in Disguise '15
SKYWARP!
He's sleek, he's slick and he'll make y'all sick!

For my own part, honourable mention to one I actually own:

One of the best redecos of the Jetstorm mold.

I definitely want this guy at some point. I already like how the mold looks but in Skywarp colours he's positively delightful.
Re: Top 5 Best Skywarp Transformers Toys so Far (2103975)
Posted by AllNewSuperRobot on May 7th, 2021 @ 9:33am CDT

Evil Eye wrote:I definitely want this guy at some point. I already like how the mold looks but in Skywarp colours he's positively delightful.

The whole line looks really good. Skywarp is a standout among them.
Click here to view additional comments about this topic at the Energon Pub Forums ...