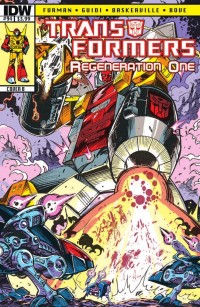 CYBERTRON UNDER SIEGE! As BLUDGEON’s Blitz Engines wreak havoc, the AUTOBOTS struggle to muster a response to a threat that feels all too close to home! But their “greatest warrior," ULTRA MAGNUS, has problems of his own… in the shape of a fighting mad GALVATRON. It’s the clash of titans you’ve (almost) never seen before! Variations on a couple of themes

Story
Readers of the UK iteration of the old Marvel comics might get quite the kick from this issue, as it's Ultra Magnus versus Galvatron all over again on Cybertron's surface! Bludgeon does things in space, or rather, just above Cybertron. Meanwhile, closer to the planet's core, Hot Rod and the Dinobots have encountered a Primus-possessed Grimlock.

And actually, that last part, as much as it's extremely smirk-inducing, is resolved very quickly, setting one of the scenes for next month's ReGeneration One #0. We still have to wait a couple of months for Hot Rod's fate and the Dinobots' reunion. The main story takes place with the Autobots' greatest (reluctant) warrior and the mad reincarnated time-traveller. The Autobot's -ah- reaction plan isn't exactly original, or particularly effective, from both an in-story and storytelling perspective, and is kind of squeezed in at the very end, though it doesn't detract too much from the issue. Same can be said for Bludgeon's own machinations, as most of the exposition is done from the Autobot side.

The protracted fight scene is executed well enough, though, to forgive the other plots being left a bit too much to the side, and the Cybertronian reaction intertwines with Magnus' fight, so it can be worked into the plot too. And the art serves the story well, see below.

Guidi's artwork on the issue is a real knockout, especially with the extremely high number of fight sequences and dynamic poses. Baskerville's inks on Guidi's work are just the cherry on a sundae so good-looking you want to keep it in a frozen glass case. As per usual, JP Bove's magical technicolour paintbrush (pen?) makes everything that Guidi and Baskerville shine, sparkle and glitter - unless it has to be dark, moody, and gorey. The skies are always my personal favourite, but I am also pleasantly impressed by Shawn Lee's newly creative lettering, with some excellent font work mixing well with Furman's onomatopoeias and soundwords. All in all, the issue is absolutely gorgeous, and it's hard to pick out anything that doesn't really work that well from a visual aspect.

Some fairly clever visual storytelling manages to weave all the threads together, and leaves us with an image that I want to show because it's absolutely stunning and actually spoils nothing. Up to you to figure out the winner of the clash.

I really really really enjoyed this issue, the fight sequences weren't too dragged out, it nodded continuously to old material without rehashing it or being too obviously a cliché-fest, it has God Grimlock and some excellent swearing. Book, good - you, read. Next month, some stalling, maybe minor plotting, and we're back on schedule in October!