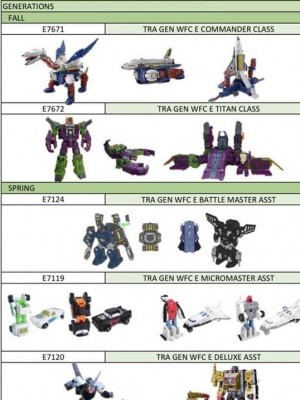 ToyFair 2020 is on the horizon, but as we bide our time plenty of spycraft and whispers have made their way to the latest Seibertron.com Twincast / Podcast. Join Scotty P, Cobotron, and Megatronus for reactions to Earthrise leaks, wild Beast Wars movie speculation, a cavalcade of convention options, and all the usual banter you never knew you wanted to hear until you heard it. Brace yourselves, and prepare to be boarded.

Episode #240 “Ramping Up” is available directly and in our RSS Feed, and should appear on Apple Podcasts, Google Play, and Stitcher Radio within 24 to 48 hours of when you see this news post.

Here's what we talk about in the episode:

Stay tuned for the next episode when we catch up on the just announced Wonderfest reveals and all the latest from New York Toy Fair 2020!

Scotty: Ricon was a Hasbro original creation, the RI standing for Rhode Island, and the CON for something else I can't remember. But the name and colors were special for hasbro for an original figure.

Cobs: I agree, micromaster weapon modes are bad except the flyers. They make great swords, and they work as daggers for Combiners!

How did I miss the Black Zarak little dude in selects? I don't remember that. either way, I want a Black Zarak.

Ari: you only need a couple Cyberverse guys, you don't have to go all in, it is hard to go all in on this line anyway. Get some spark armor and some deluxes and ultimate Grimlock.

Movies: don't even listen to Diboneventure. Just don't. Dude reversed what he said 3 times in the course of a week. He is not a good source.

Ari: the little Galvatron and Rodimus with Unicron were updated to their G1 movie models recently, I know we newsed that.

Watiti should direct a TF film, he has made some great movies that I really love.

Any Beast Wars movie requires Chalk and Kaye, no doubt! And a mo-cap of those 2 and the other voice actors would be perfect, I think that would be awesome!

P.S. the Pirates at worlds end movie was great, I still love it, and Davy Jones was incredible.

Wish I could do this TFcon! I truly enjoyed some time with Ari and Jason, and would love to see more of you! I'm still begging for a TFcon Pittsburgh even though it will never happen.

Cobs: Motorcycle dude looks awesome, we had the same thoughts! I still don't have the Tridasher (waiting in my stack), but I felt good enough to pre-order the biker dude, I love those wheels and that he can surf his bike component. I can't remember, are you getting the red jet dude that can serve as an upgrade for the Triverse guys?

Scotty: just listened to the show where you talked about MTMTE32: It was Tom B. Long who did the mirroring.

TFcon: dealer room is LETHAL. That place is DANGEROUS.

I was gonna say and then you shot me down, Ricon's v mode matched up to Tote but the head sculpt is someone else entirely. Who was you other random oddball? I can account for all of them otherwise

I have enjoyed most of the Micromaster weapon modes, although I dont store thrm in that form. For the Firetruck guys, I do it in reverse and use their cannons as snipers and leave the Police Cars folded as yhe gun stock.

I am surprised by how effective Bombshock's heels are, given they are angled down and dont lock into anything. Bombshock and Growl really feel like a culmination of every other trick used so far, even if it is identical to their old toys.
Excited for the Rampmasters but don't get your hopes up too much Scotty, Soundbarrier has the same leg guns, in fact the ramp even has molded guns to either side of the deck and the same angled back half, so I wouldn't expect the others to be any different than the Siege Aimless and Blowpipe were to each other.

Since thisbtook a couple days to listen too, the Hot Rod Pateol came in after you talked about this. I like the vehicle modes for what they are, but mine the feet don't seal up to the car body in alt mode all the way. Robot modes are meh for all the previously stated reasons and the guns are rhe same issues as all the other identical car guys. At least you can sorta fold the shoulder panels forward like gun arms?

G1 Sky Lynx was about 2 Ultras. Maybe current Leaders since those are smaller than before.

So I like everything you guys are saying about the upcoming Beast Wars movie, but I really feel like if you try to do too much of the original movie, your threading. I'm needle. Of being to unoriginal and predictable.

Benedict cumberbach did a full body mocap movement for Smaug in The Hobbit. There is video of him actually crawling around on the ground Dragon style for the part. He could totally do a beast wars Megatron.

I think I had a Transformers Monopoly.

I want to see a Transformers/Agents of Shield crossover if we dare to dream big. There is a lot of material there to work with, such as Side Burn crushing hard on Coulson's flying car

Do I remember you saying the Metroplex TCG Set is dried up and gone, Scotty? I found a shop in Indy with several on shelf and loose cards for sale. I don't have anyone around me playing though

I would agree with Pokemon, Megatronus.
Re: Twincast / Podcast Episode #240: "Ramping Up" (2052409)
Posted by Stargrave on February 15th, 2020 @ 9:25am CST
Another fun enjoyable episode thanks so much guys. Sometimes you just keep my fire for the hobby burning when I need it. Keep up the great work!

Stargrave wrote:Another fun enjoyable episode thanks so much guys. Sometimes you just keep my fire for the hobby burning when I need it. Keep up the great work!

Honestly, I would not doubt that somehow, this might actually be accurate

TFWiki wrote: Ricon's name appears to be derived from the "RI Construction" label on the original Ironworks toy's vehicle mode, itself a reference to Rhode Island, home to Hasbro's headquarters, and apparently is pronounced to rhyme with "icon".