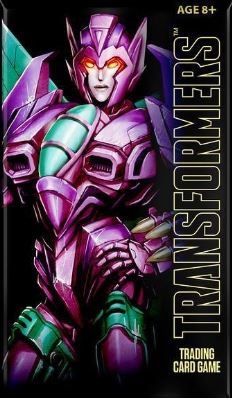 Hasbro has posted on their site a series of four videos that explain the new rules to the soon to be released trading card game. The videos cover the deck building, explain how to read the stats on the card as well as all of the steps necessary to play and win the game. The videos can be viewed here. There is also a printable version of the rules if you would like to have them for reference. Now that we know how the gameplay works, what do you think of the game?

Actual gameplay will vary from gameplay shown. For full 2-player gameplay, each player puts together a team of Character Cards (up to 25 stars when stars on Character Cards are added together), and a deck of 40 or more Battle Cards. Click below for the Transformers TCG Rules.
With the AUTOBOTS Starter Set, 2 players can start playing the game with fewer cards, -or- 1 player can use this set for full gameplay. Players can add cards to their teams and decks with Booster Packs (each sold separately) 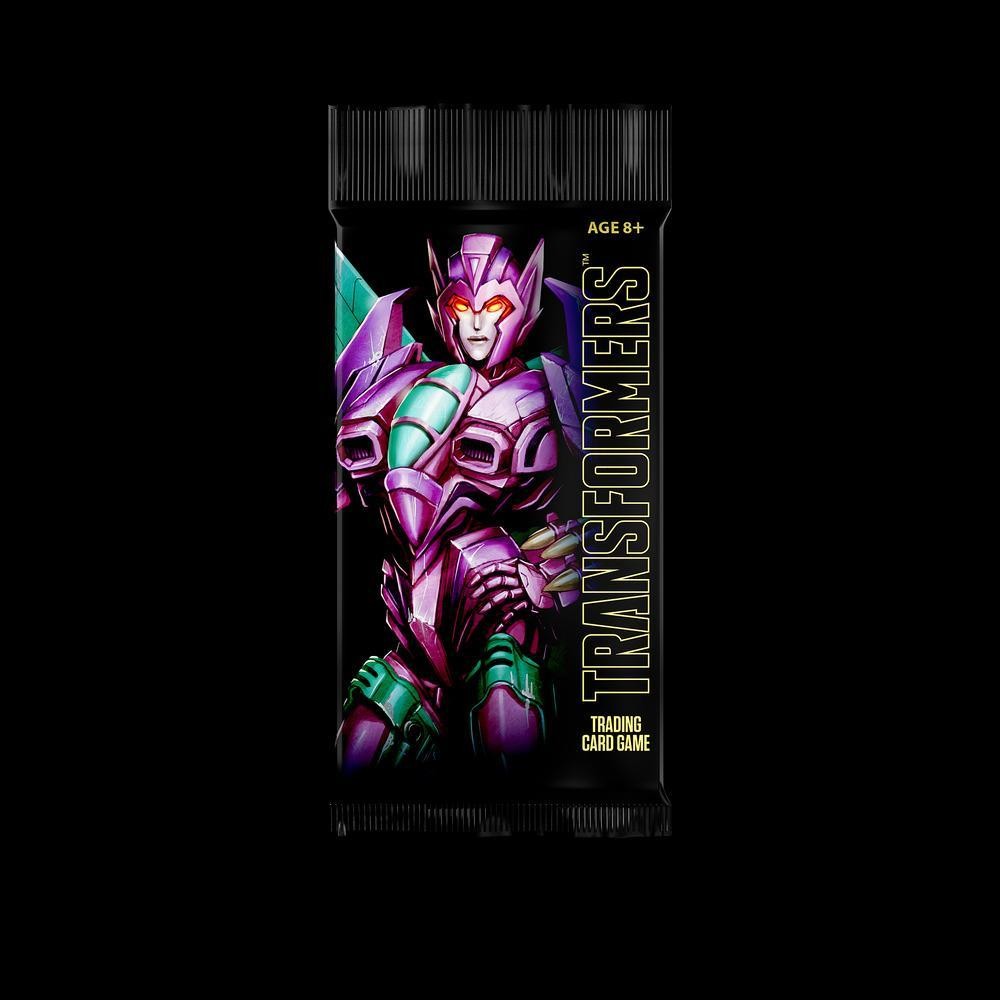 They're very thin in MTG, too. The "rules" (as such) are complimented by what the cards tell you to do, rather than having a rule structure filled with endless what-ifs.
Re: Transformers Trading Card Game Rules Explained (1973581)
Posted by dragons on July 24th, 2018 @ 7:03am CDT
Like how some trading card games don’t explain what tapping is I first played magic gathering I thought tapping card means was tapping with your finger not turn card sideways game seems easy to play
Re: Transformers Trading Card Game Rules Explained (1973602)
Posted by #Sideways# on July 24th, 2018 @ 8:43am CDT
The only thing I sort of dislike is how Attacking and Defending reveals cards from your deck -- it's just a bunch of variance. It would be fine, though, if there were Scrying or similar tutor skills. But you seem to burn through your deck pretty quickly if you keep to the 40-card minimum. I also adore how you can attack with one guy per turn. Then, you can sequence what you want your opponents to be able to attack.

Do we have any set spoilers?

I wonder if they'll allow me into tournaments with a playmat of Kiss Players Legion with his tongue hanging out...

#Sideways# wrote:The only thing I sort of dislike is how Attacking and Defending reveals cards from your deck -- it's just a bunch of variance. It would be fine, though, if there were Scrying or similar tutor skills. But you seem to burn through your deck pretty quickly if you keep to the 40-card minimum. I also adore how you can attack with one guy per turn. Then, you can sequence what you want your opponents to be able to attack.

Do we have any set spoilers?

I wonder if they'll allow me into tournaments with a playmat of Kiss Players Legion with his tongue hanging out...

Actually it reminds me of cardfight vanguard with its drive checks and the old warhammer 40000 cars game where dice rolls were sorted by revealing the top card of your deck.
Re: Transformers Trading Card Game Rules Explained (1973613)
Posted by Va'al on July 24th, 2018 @ 9:19am CDT
We do also have a brief interview with the WoC rep who explained the set a little more (though not that much more than the videos show, now that I remember more of it), and showed us the Cosmos card - we're uploading everything slowly, but surely.

Would anyone like to see the SDCC exclusive card pack? In a pictorial review maybe?
Re: Transformers Trading Card Game Rules Explained (1973629)
Posted by Anonymous on July 24th, 2018 @ 10:07am CDT
Comparing it to MtG in terms of slim rules doesnt add up to me because

MtG has all in one deck:
lands
creatures
Spells

The play therefore encompases all aspects of building your economy, creatures and magic. Multiple different strategies are possible as a result ie direct damage rather than creature spam etc.

This Transformers game appears to be so simplistic you simply lay your chaps out before you start. No economy, no balancing deck construction between economy, control or brute force.

Ill be getting a set and seeing how it works in pracitce, its just from first glance it seems to me you would need to have very very involving game mechanics in terms of the fighting to keep the interest. Maybe the transforming mechanic will be it, but no guarantees.

Va'al wrote:
Would anyone like to see the SDCC exclusive card pack? In a pictorial review maybe?

I did manage to find a link that tells us the names of the cards that will be in the Autobot Starter set but they have no card text.
Re: Transformers Trading Card Game Rules Explained (1973737)
Posted by WreckerJack on July 24th, 2018 @ 3:40pm CDT
For those of us that have been speculating about the new Transformers Trading Card game we now have a list of what the Autobot Starter Set contains. You can find the list here. While this list does not show us any of the card text (Besides the image of Bumblebee//Brave Warrior) we can have a better idea of what deck structure will look like for the game.

Recently we discovered the video instructions of how to play this game as well as more details about the game from SDCC. Because of this we know that the battle cards are made up of power up items and actions which is reflected in the list. We will post the list below along with the details on the contents of this set. Feel free to speculate on what you think these cards will do on the boards. 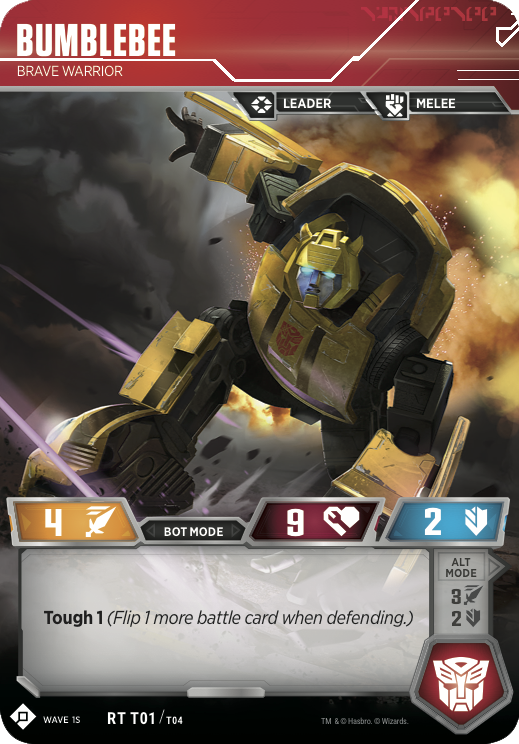 Why only the bot starter set i wonder,seems really wierd to not have a con one at the same time
Re: Transformers Trading Card Game Rules Explained (1973771)
Posted by Va'al on July 24th, 2018 @ 5:06pm CDT
New con video interview, sorry about the audio!

forever!
Re: Transformers Trading Card Game Rules Explained (1973856)
Posted by Va'al on July 25th, 2018 @ 4:11am CDT
People have expressed interest in the booster pack on offer at San Diego Comic Con for the new trading card game created by Hasbro and Wizards of the Coast for Transformers (due out at retail in September 2018), so we took out the cards and did a brief pictorial rundown for all to check out - follow us below!

Packaging, front and rear, with nice Slipstream art. Each pack contains 2 character cards (foil, in this case) plus 2 battle cards. 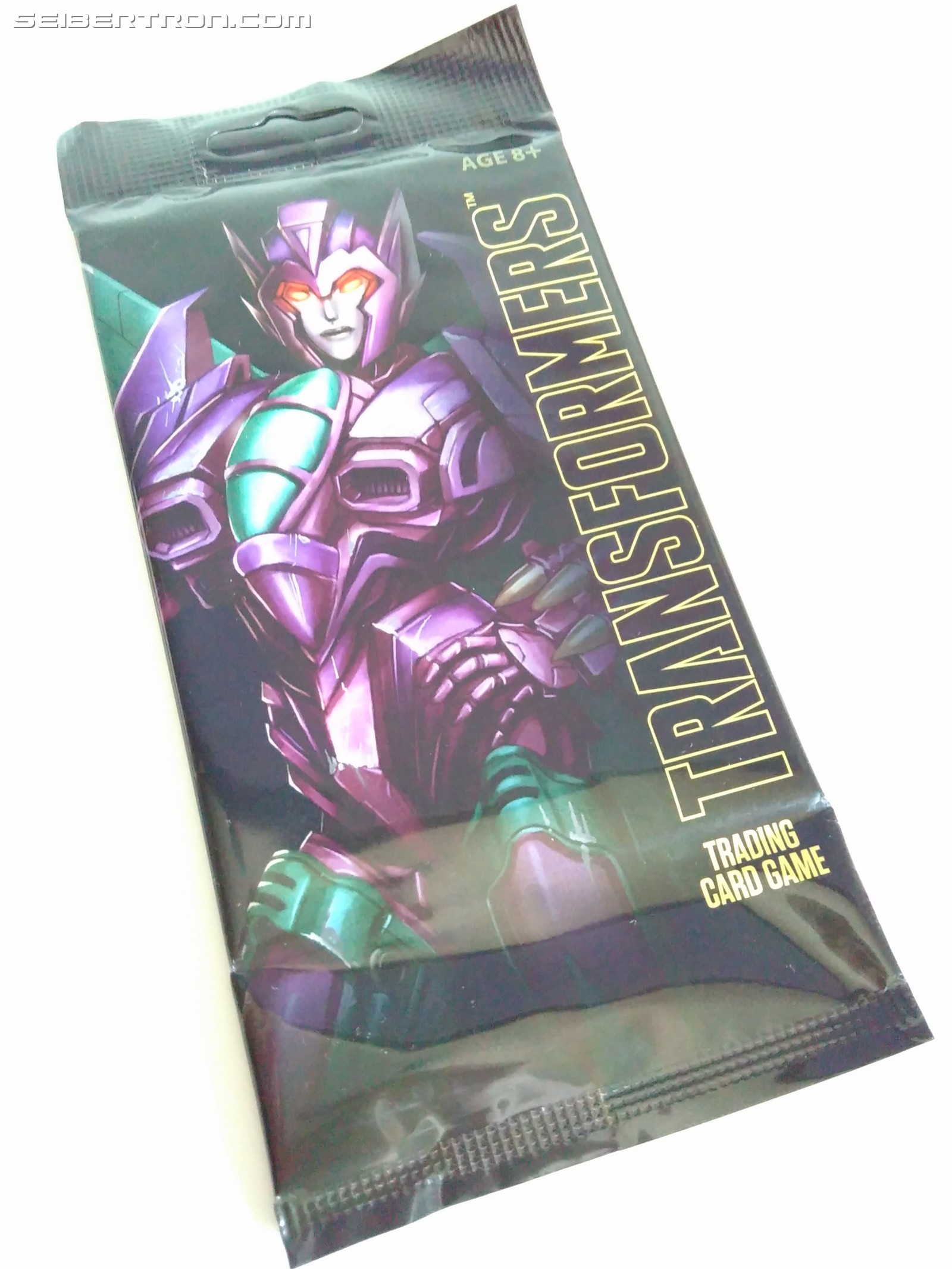 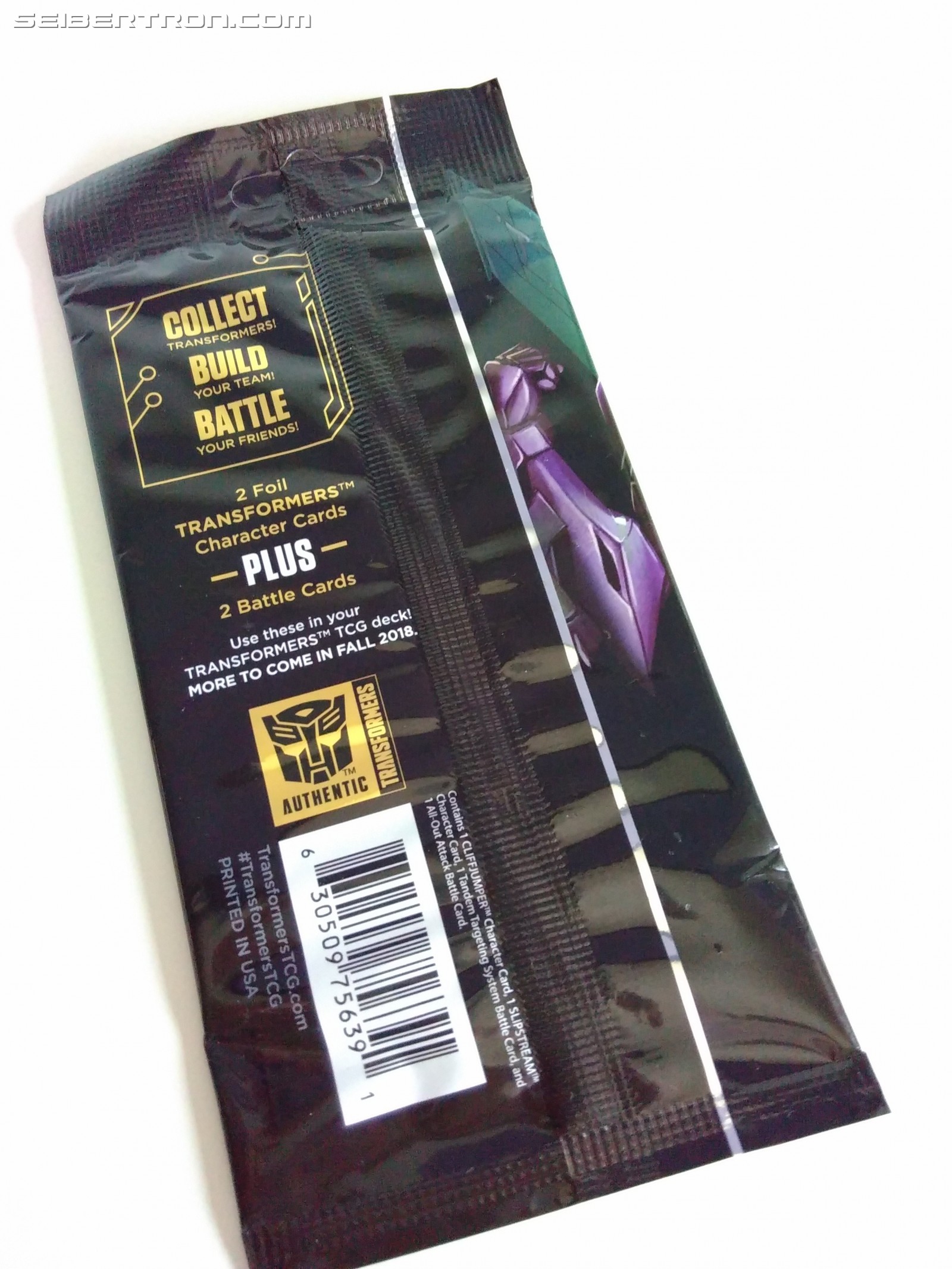 Cardboard inserted to protect the cards. 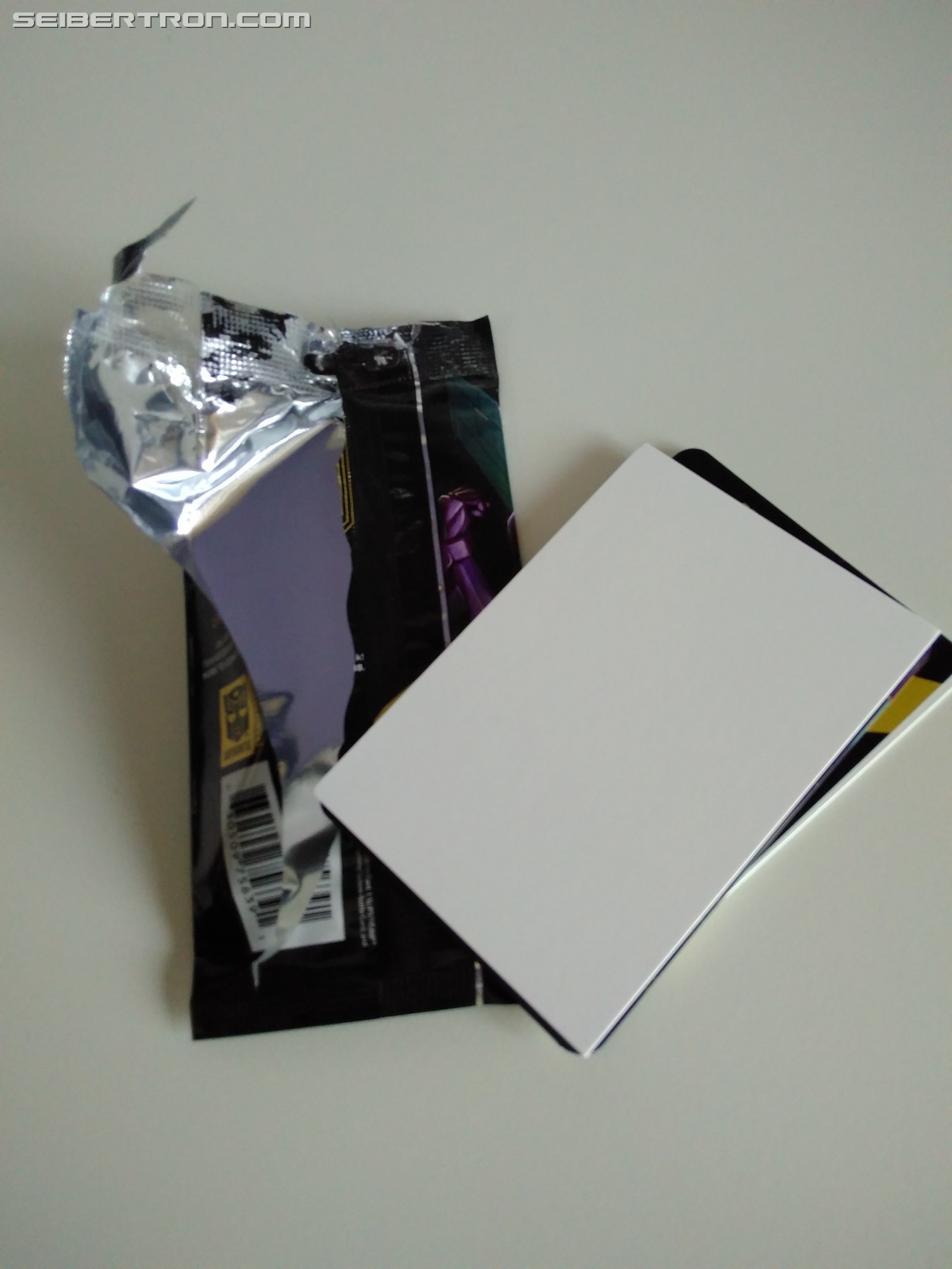 Pack also includes a promotional gold foil card for the game, with Slipstream silhouette one one side.
Then the two and two cards, as described on packaging! 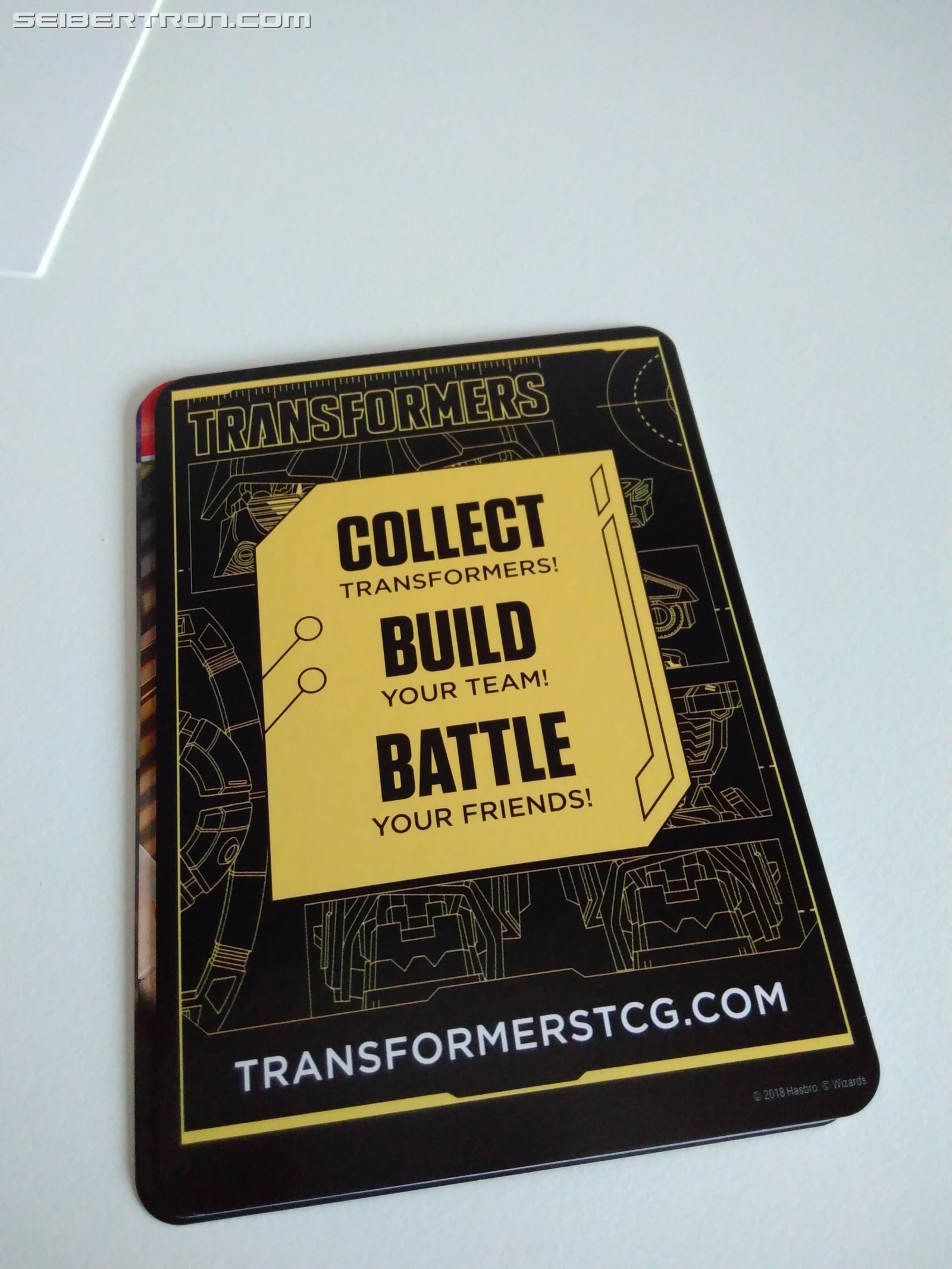 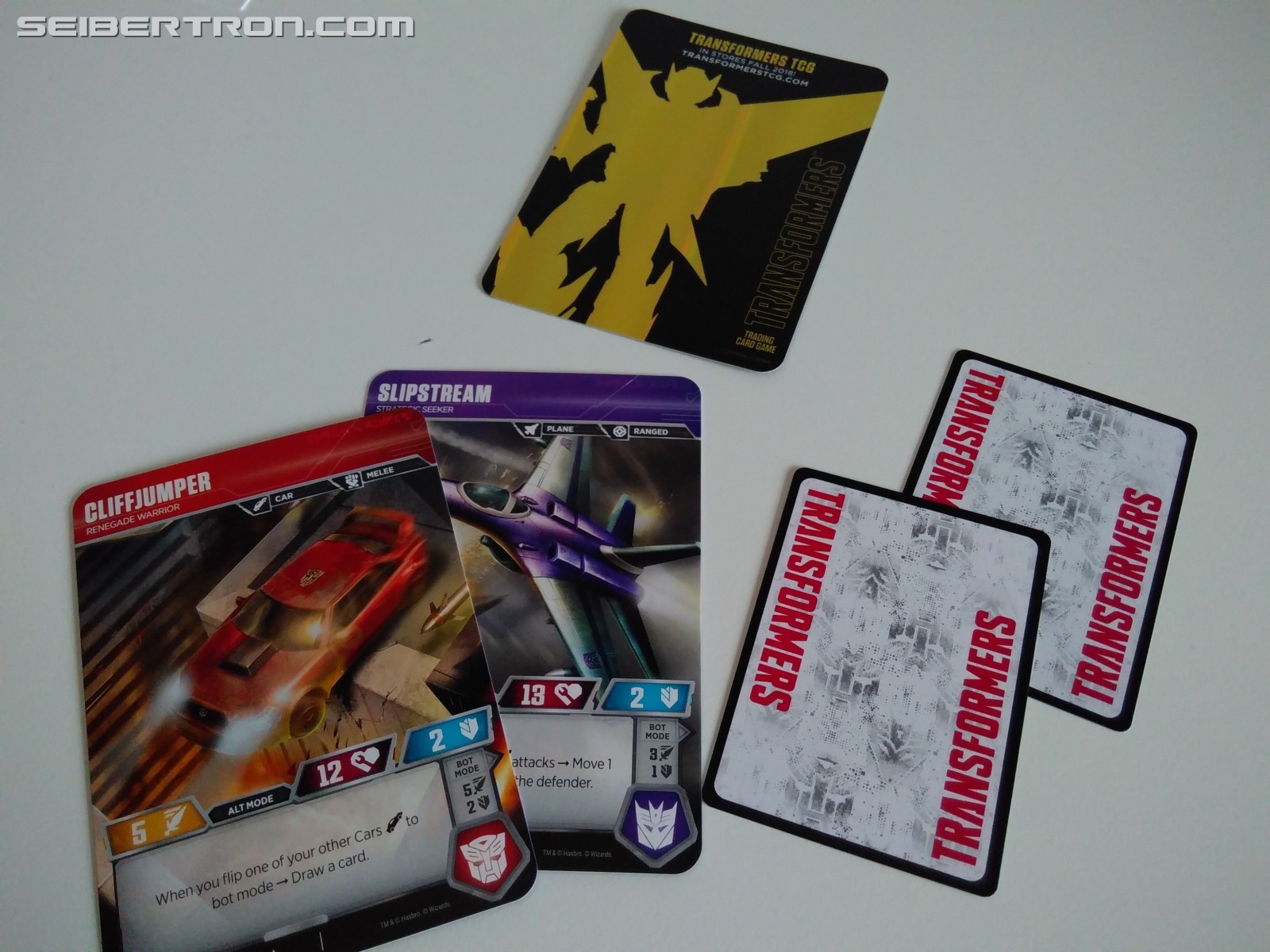 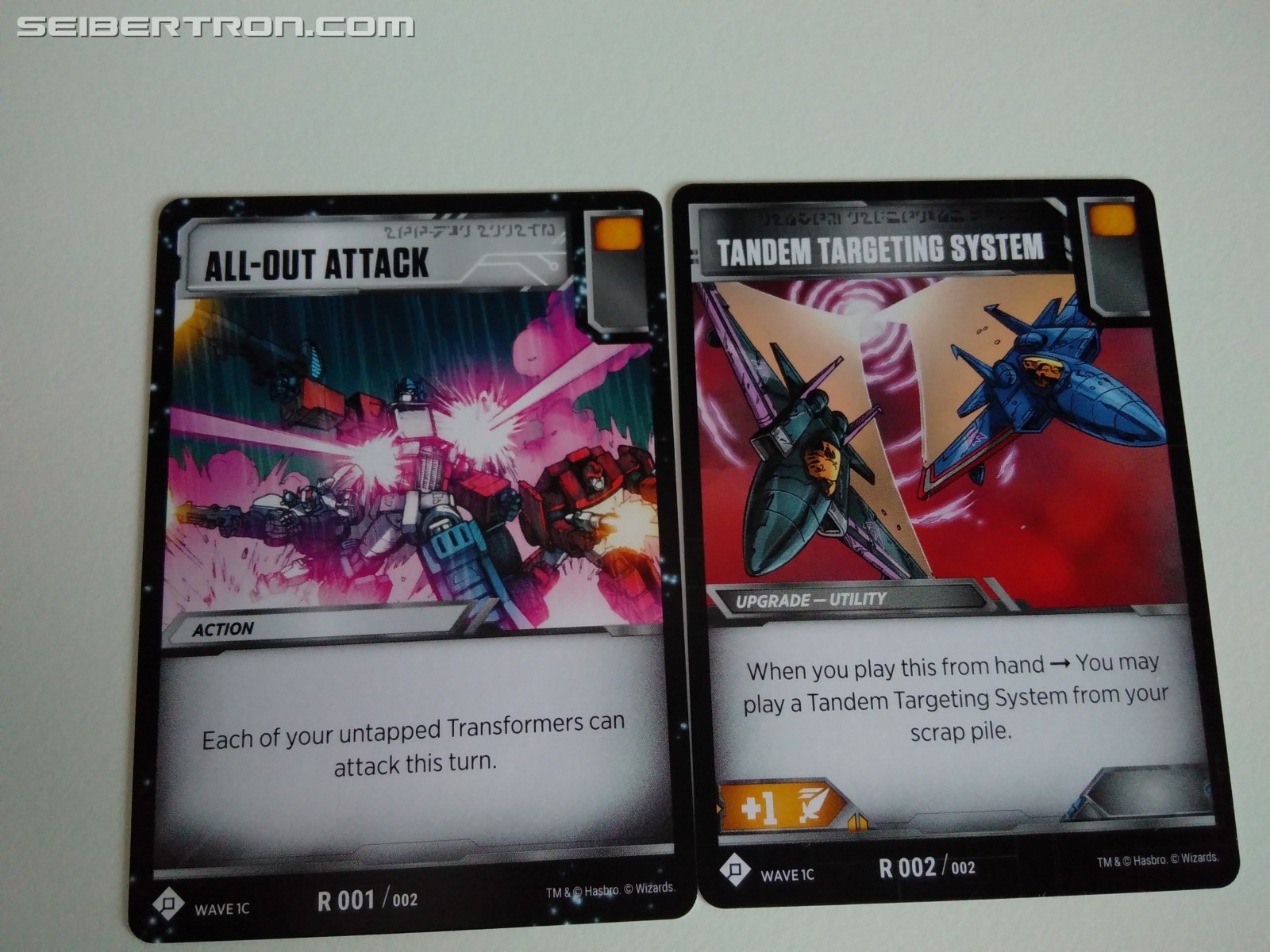 First character card is Slipstream - one side in jet mode, one in robot mode. The robot mode art is foil, and each mode has a different ability. 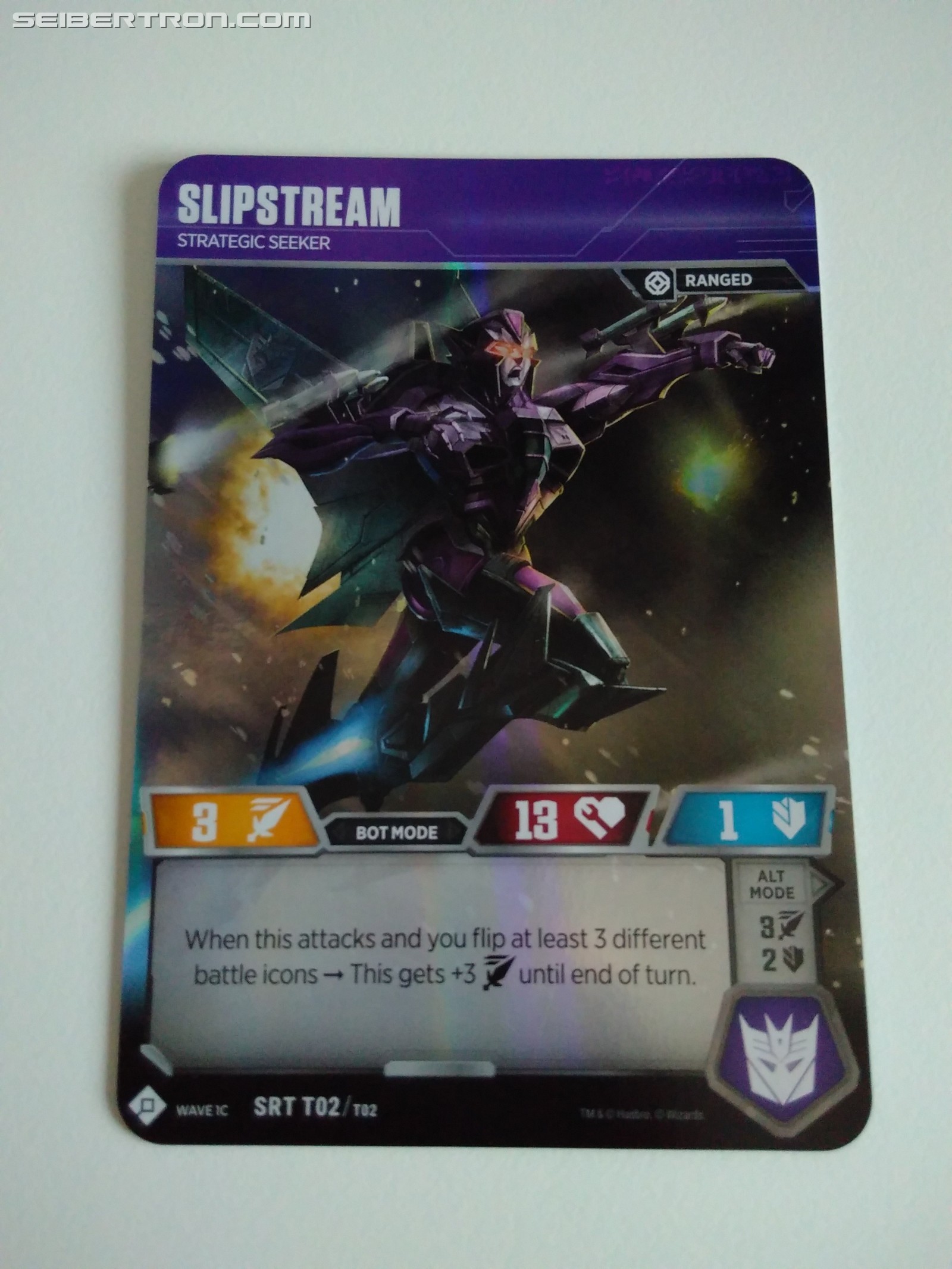 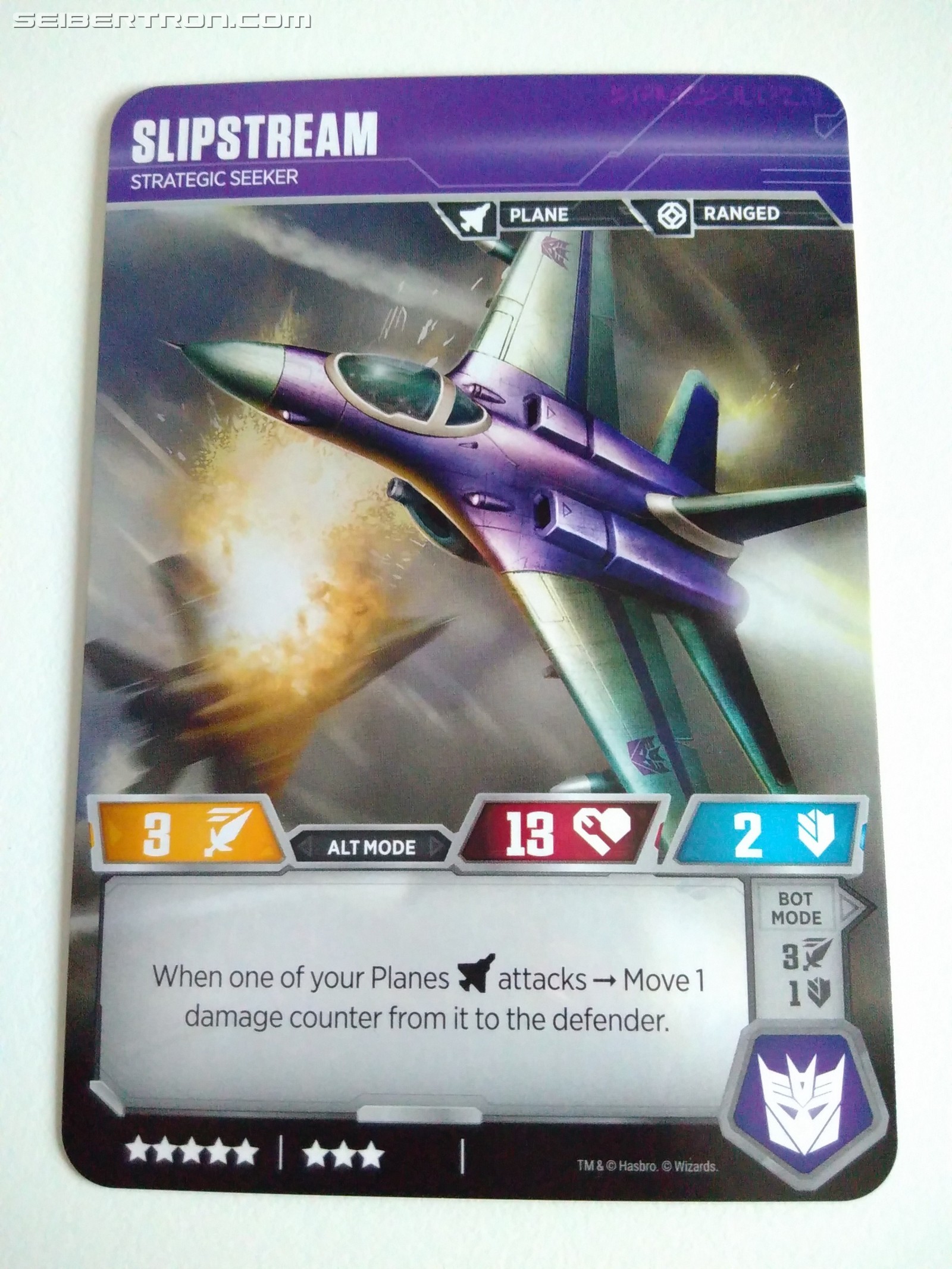 Second character card is Cliffjumper - one side in vehicle mode, one in robot mode. The robot mode art is foil, and each mode has a different ability. 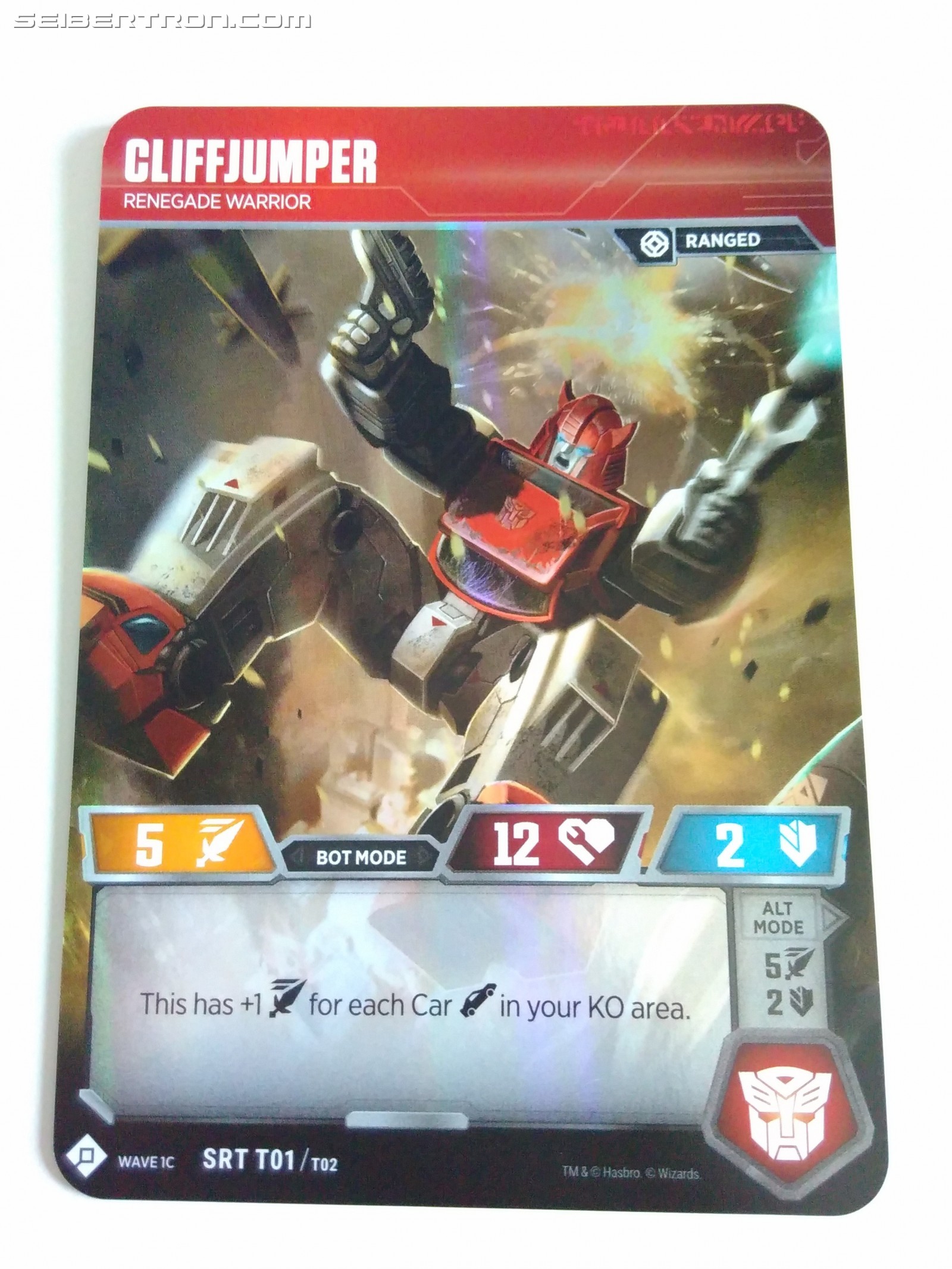 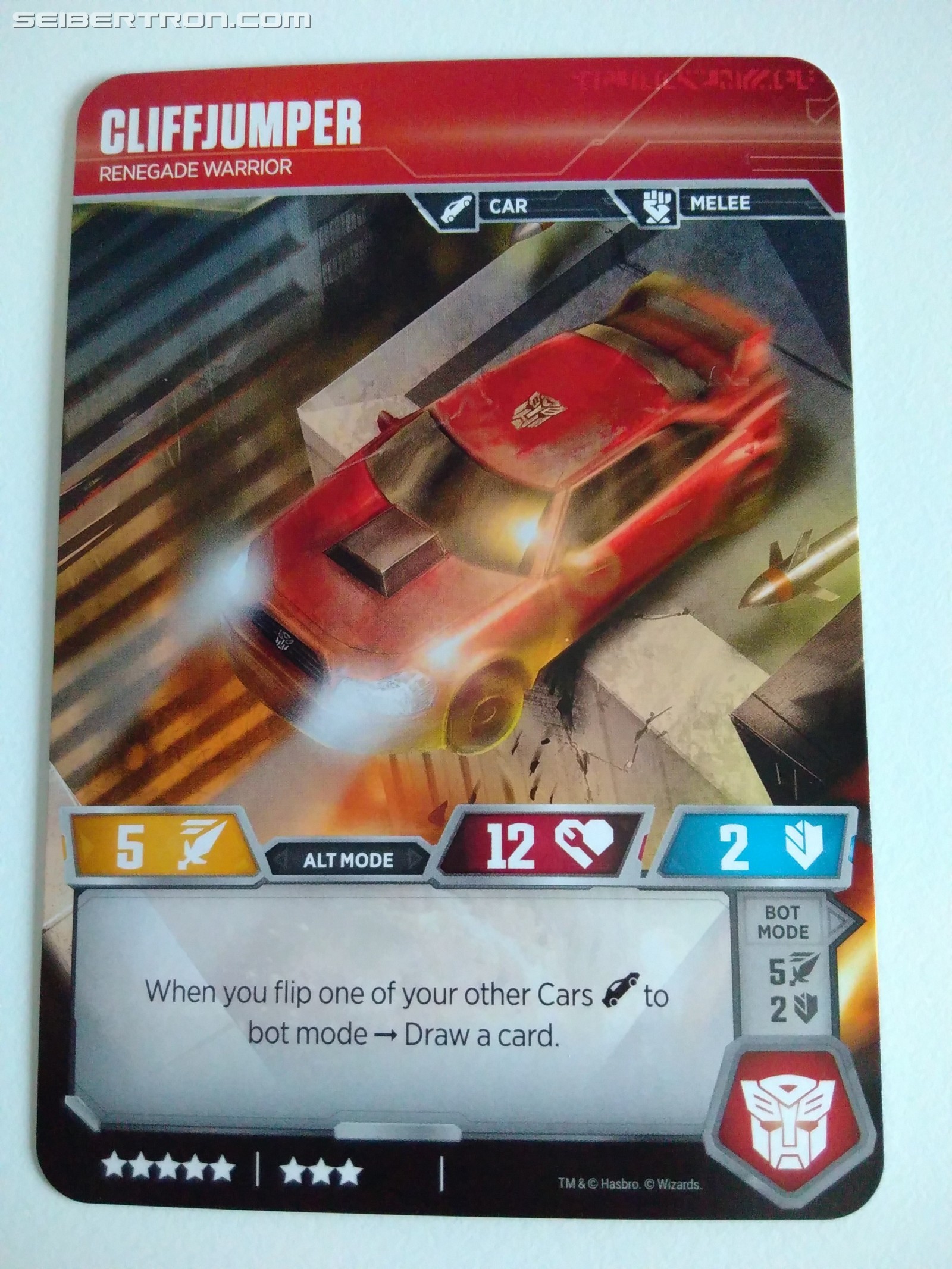 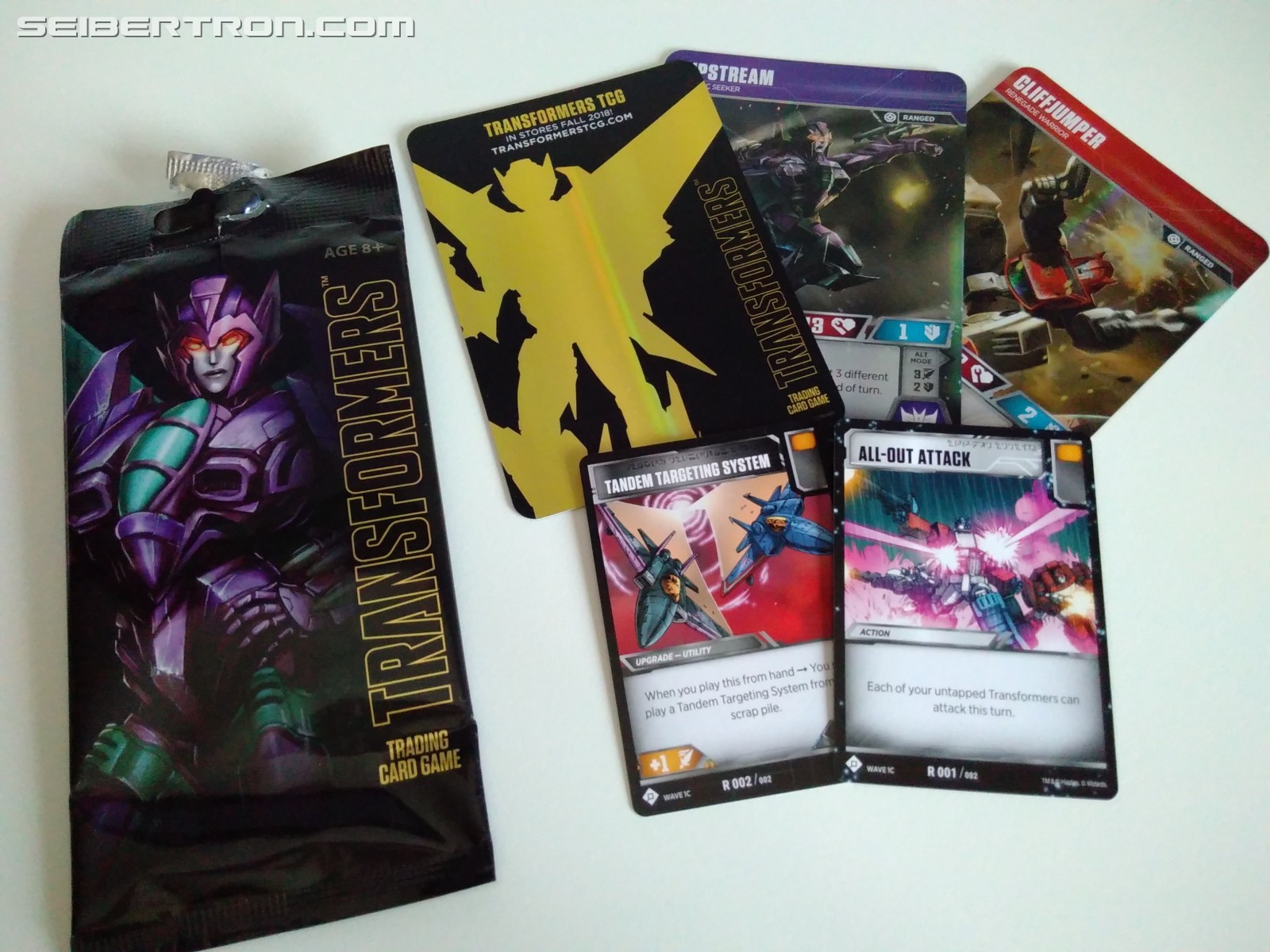 Re: Transformers Trading Card Game Rules Explained (1973863)
Posted by WreckerJack on July 25th, 2018 @ 5:23am CDT
I noticed the card names are written in Cybertronian on the top right. That's a neat Easter egg right there.

Also, how to these cards feel in hand? Same as magic cards?

Omega-Doom wrote:Is there going to be a Decepticon starter deck? I would love it if they had released one.

I think it would be a mistake not to have one. Its always been about Bots VS Cons. My guess is since the starter decks become available September 28, 2018 they will probably have some time to reveal a Decepticon deck before then.

Looking at most successful card games starter decks often come in pairs so that players can start with different decks. This is a good idea because the point of collectible card games are so that you can customize your deck rather than just play with preset cards. Facing different decks and choosing one that matches the player's style is very important. Especially when people feel they identify with the characters on the cards.

Magic players may remember how attached people got to their Ravnica guilds. The Return to Ravnica set saw record sales and event attendance too. While I doubt any cardgame could match that I think the principal is the same. Sorry if that's a ramble. I could use some sleep haha.
Re: Transformers Trading Card Game Rules Explained (1973864)
Posted by ZeroWolf on July 25th, 2018 @ 5:24am CDT
Thanks va'al

this looks interesting so far and if it's easy to play the better as you know what they say: easy to learn, difficult to master...wonder if takara would be tempted to make an anime about it